Home Conflict Insurgency India’s Counterinsurgency in the Northeast Challenges the Relationship Between Time and Insurgent... 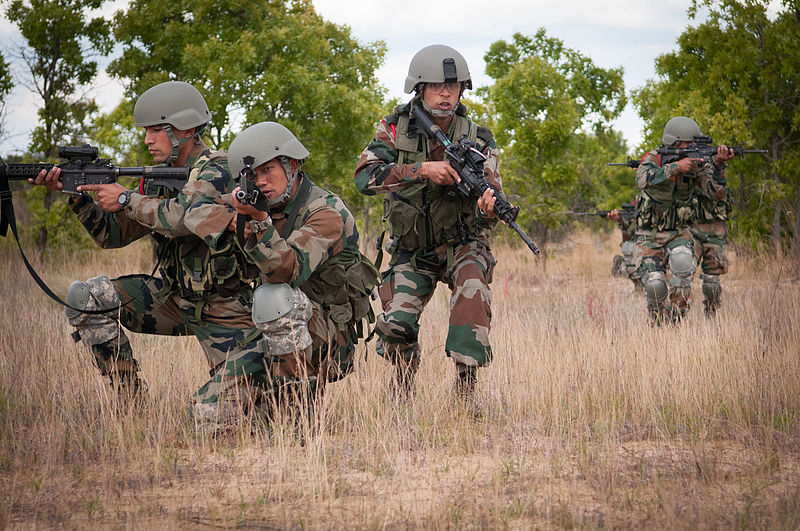 The Taliban’s famous warning to Canadian General Rick Hillier that ‘you have the watches, we have the time’ captures the asymmetric logic of guerrilla war.

The ‘watches’ analogy on the one hand hints at the technical prowess and superiority in manpower, firepower and resources that counterinsurgents typically enjoy. On the other, it concerns counterinsurgents’ typically limited timeframe for dealing with an insurgency, determined often by the political considerations of faraway capitals. This logic dictates that insurgents, embedded in the social, political and cultural order, need to simply outlast the typically more powerful counterinsurgent in order to win the ‘war of the flea.’

For Thomas Hammes, ‘the greatest strength of any insurgent is the fact that he doesn’t have to win [..] As long as the insurgent can stay in the fight, it is not over. Their forces are not going home.’

Samuel B. Griffith, in his introduction to the United States Marine Corps’ publication of Mao’s classic treatise, On Guerrilla Warfare, goes as far as to suggest that there is ‘very little hope of destroying a revolutionary guerrilla movement after it has survived the first phase and has acquired the sympathetic support of a significant segment of the population.’

The assumption here is that insurgencies follow a linear trajectory that, when certain thresholds are crossed, transforms longevity into a key rebel advantage. In insurgency and counterinsurgency theory, the concept of time is implicitly but closely connected to assumptions about the will and commitment of either party, assumptions that largely favour the insurgent and disadvantage the counterinsurgent.

India’s six decades of experience with insurgencies in its Northeast appear to turn this logic on its head.

When insurgencies broke out in the Naga and Mizo Hills during the 1950s and 1960s, the newly-independent state’s integrity appeared fragile and, as a result of effective militant mobilisation and costly military learning curves, both insurgencies appeared to cross Griffiths’ threshold of popular support. The 1970s, 1980s and 1990s saw political instability and armed mobilisation across the region, including in Manipur, Tripura and Assam. Several of these insurgencies enjoyed popular support – at its peak during the late 1980s and early 1990s.

For example, the United Liberation Front of Asom (ULFA) enjoyed the support of large swathes of the population. The logic of insurgency theory implies that time represents an asset for these insurgent groups, who would simply need to outlast New Delhi’s commitment to counterinsurgency operations to achieve victory.

Fast forward to today, however, and it is Indian state ministers that are proclaiming victory. In July 2018, Union Home Minister Rajnath Singh proclaimed that insurgency-related incidents had declined by 85% since the 1990s, when violence reached particularly high levels.

Groups such as the Naga National Council (NNC), once the bane of the Indian security forces during the 1950s and 1960s, have suffered countless splits, gradually eroding its capacities since the 1980s. Its more powerful successor, the National Socialist Council of Nagalim – Isak-Muivah (NSCN – IM), has co-existed with the Indian state in tense, but durable ceasefire conditions since 1997. Its largest rival, the NSCN – Khaplang (NSCN – K), which split from the NSCN in 1988 and signed its own ceasefire in 2001, has thrice split into rival factions, most recently in September 2018.

While the intentions of the most recent emergent factions are as yet unclear, the 2011 and 2015 splits produced new splinter factions willing to do business with Delhi, following a broader regional pattern of armed group fragmentation into pro and anti-peace talk factions.

While it is important to caveat that a number of armed groups remain camped in Myanmar, poised to conduct attacks against Indian interests on public holidays and through transit routes in Arunachal Pradesh, these groups tend to operate as cross-border ‘foco’ organisations, or small, vanguard-like bands of militants that launch incursions into Indian territory. Geographically isolated from the populations they seek to mobilise within India, they can longer draw on mass bases of popular support, although this type of insurgent activity poses new challenges for India’s attempts to foster regional connectivity through its Act East vision.

While New Delhi has been resolute in opposing secession, its actual willingness to clamp down on insurgencies in the region as well as its will to bring about comprehensive political solutions has waxed and waned over time, a consequence of its peripheral status in the Indian political setup. Its main priority in the Northeast in recent years, as one former government official once put it, is to keep violence levels ‘within tolerable limits.’

This, as Paul Staniland argues, still compels Delhi to hit back when necessary to police major violations, as has been the case in recent operations against National Democratic Front of Bodoland – Songbijit (now Saoraigwra) and NSCN – K militants, but crucially also gives it the leeway to cut deals, coexist and soak up residual patterns of violence and ‘durable disorder,’ especially when compared with the much greater urgency to crack down on militancy on its politically-sensitive north-western frontiers along the India-Pakistan border.

Surprisingly, it is this very lack of a sustained, aggressive determination to beat insurgencies into submission that has placed time on the side of the Indian state, rather than the insurgent, in the Northeast. The longevity of the government’s peace talks with insurgent groups, exemplified by the now-21-year-old ceasefire with the NSCN – IM and a ‘traffic jam’ of peace talks with other outfits, has created growing challenges for rebel leaders attempting to manage their cadre bases. While extortion continues to provide armed groups with a steady source of funds, few groups under ceasefire or Suspension of Operations Agreements (SoAs) have been able to maintain organisations militarily capable of credibly threatening a return to ‘the jungle.’

While the NSCN-IM has been able to keep parts of its cadre base on a war footing by deploying its militants in contested areas of Manipur and Arunachal Pradesh, clashing with rival factions and at times even government security forces, a return to ‘the jungle’ appears increasingly unfeasible. Decades of pumping central funds into the region, although to an extent feeding into the networks of entrenched corruption and patronisation that sustain insurgent groups, have wedded many armed groups to the conditions of ceasefire.

Much of the trappings of the NSCN – IM’s present-day rebel governance structures, including its administrative capital of ‘Camp Hebron’ and its ‘taxation’ networks in key cities, are for example, dependent upon the preservation of the ceasefire and would be extremely costly to uproot in the unlikely event of its collapse.

Within this context, many of the region’s armed groups are susceptible to the longer-term erosion of their own cadre base as well as the social, political and cultural conditions that sustain recruitment to this base, creating management problems for armed group leaders. Indeed, the leadership themselves are not getting any younger, as the recent passing of insurgent stalwarts Isak Swu of NSCN-IM and S. S. Khaplang of NSCN-K suggest.

ULFA’s foreign secretary, Sashadhar Choudhury in 2013 highlighted the essentially limited shelf-life of the group’s cadre base, in which cadres had been increasingly prone to defection and a return ‘overground’ after reaching around 30 years of age due to pressure from spouses and family members. The opportunities for family life and fresh employment that ceasefires offer further alter the calculi of insurgent cadre bases.

Armed groups are also suffering from a shrinking pool of recruits as the incentive structures underpinning insurgent recruitment gradually erode. Longer-term social and cultural change, spurred by the region’s greater connectivity to both the rest of India and the wider world, make it increasingly difficult for insurgents to appeal to younger generations, who are increasingly looking outwards to cities in mainland India and further afield.

While the underlying social, economic and political conditions underpinning insurgent legitimation and recruitment remain, the absence of sustained, aggressive counterinsurgency operations in recent years has deprived insurgent groups of a crucial source of fresh legitimation upon which mobilisation has depended, rendering them more vulnerable to the internal attrition of age and social pressures.

The fact that these longer-term, corrosive processes are taking place in parallel to the peace processes has led to suggestions that India is in fact seeking to wear out insurgencies over a sustained period of time rather than push for formal resolution. For New Delhi, time does not carry the weight that has burdened the expeditionary counterinsurgencies of the War on Terror.

While the presence of non-ceasefire signatory armed groups looks likely to continue and potentially disrupt India’s Act East ambitions, the continuing arc of declining violence in the region suggests that time in this case favours the side of the counterinsurgent rather than the insurgent.

While internal counterinsurgency clearly creates ‘red lines’ such as a taboo on secession, it also leads to a degree of flexibility in non-core areas, suggesting that political will is contingent upon further layers of political (dis)interest that shape how counterinsurgents deal with insurgencies over long periods of time.

This challenges the assumption that insurgencies necessarily benefit from longevity. It also reveals a pressing need to move beyond our often-excessive focus on immediate, tactical-level operations and short-term ‘hearts and minds’ service provision exercises to explore the relationship between counterinsurgency and long-term social, political, economic and cultural change.

Alex Waterman is in the final stages of his PhD at the University of Leeds, UK, and is the Northeast India contributor to the International Institute of Strategic Studies’ Armed Conflict Database. His research focuses on counterinsurgency and its relationship to social, political and cultural orders in Northeast India, as well as the study of intra-state conflict more broadly. Alex tweets @_AlexWaterman.

If you have any questions on the piece, contact the author at alex.waterman@live.co.uk.

Alex Waterman is in the final stages of his PhD at the University of Leeds, UK, and is the Northeast India contributor to the International Institute of Strategic Studies’ Armed Conflict Database. His research focuses on counterinsurgency and its relationship to social, political and cultural orders in Northeast India, as well as the study of intra-state conflict more broadly.