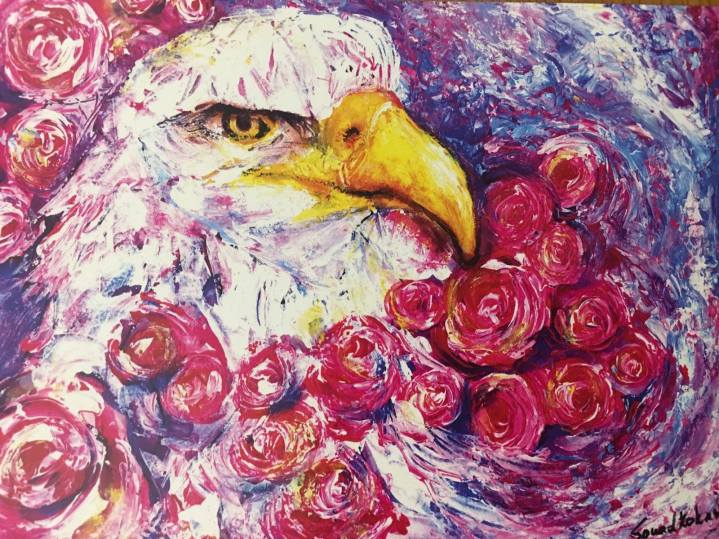 Read Part I of this series.

When you leave your mother on her bed in a room full of sunlight, you assure her that you will achieve what you intended: to cross, with your father and many others, the frontline at that well-known booking office on the junction, the one in clear view of snipers on both sides of the war.

Crowds everywhere. Women, men, and children cross in all directions. Dust surrounds you, blocking your vision.

Any wrong behaviour from you, or — if you’re unlucky — a sniper in a bad mood might leave you dead. At the crossing, a woman is shot dead by a sniper right in front of you. But you can’t save her: if you stop to help her you, too, will become an easy prey for the sniper.

So you carry on, crying, propelled forward by the people behind you pushing you forward. You keep your eyes on the ground, trying not to lose your father or your bag.

Now you are hiding in the doorway of what appears to be a huge warehouse. Your hosts are fighters with long beards. You have never warmed to them, but because you are helpless and they are armed, you have no other choice. You know you’ll see them many more times, as you cross in car on the road leading to Syria’s border with Turkey, a road bisecting Aleppo’s rebel-held and regime-controlled zones that was once forbidden to you.

The huge Turkish flag plated on the border was a severe test. For many years, we were taught in schools to hate Turkey, without really being told why. Today, we are escaping to the country that our regime groomed us to hate — it is our new refuge. As you pass the flag, you tell yourself: I will not come back at any cost. The queue to leave the city is almost mad. The rest of your city will continue to leave and never come back either.

You think of nothing as you cross Turkish cities, one by one, toward Istanbul, until one question slowly wakes you up: While the Turks were progressing and developing their country, what were we Syrians doing?

Seeing the architecture, culture, bazaars and street life of Istanbul as you cross its bridge, you can’t help but become reminded of Aleppo, the old Aleppo now lost to war.

But that you did not feel alienation where all your attempts have failed for more than two years to arrive to righteousness in the city, which enhances safety and protect you from the evil of fear that brings its resources from more than one reason.

As you and the rest of the Syrian diaspora continue to chase the “European dream”, you find in Istanbul a cross-section of your immigration trail. Istanbul isn’t your destination point, so you are determined to leave the city and all its people toward the dream you had yearned for so long. You sacrifice the thoughts of integrating into the city and its people and its cosmopolitanism, and resume those on your exodus from Aleppo.

You arrive to Amsterdam, the final destination of your dreams. The newness of the city and its people dazzles you for a few days, distracting you from the crippling alienation you later feel.

You try hard for several days and nights to find in the alleys and squares of Amsterdam the kind of intimacy that you left behind in Istanbul or that was ruined by the fire of war in Aleppo. You can end your isolation by seeking asylum, which will buckle you up and join you to the many other people who have chosen the same path of immigration, whatever their reasons and circumstances.

Those long attempts at asylum failed and disappointed you. But now, you’ve reached another year, spending New Year’s day on a walk with a Dutch family whose friendship you have gained. You walk in the old lanes of a narrow back street. Sounds, smells and colours rush at you from behind the doors and windows, taking you back to that familiarity that you thought you lost back in Aleppo.

Familiarity is the feeling of confidence and security to be who you are, the feeling of not having lost yourself in the trail, but that of earning your dream.

Painting in featured image by Souad Kokash, an interior architect and visual artist from Damascus, Syria, currently residing in Lelystad, the Netherlands.

Azad and Houda (Part I)