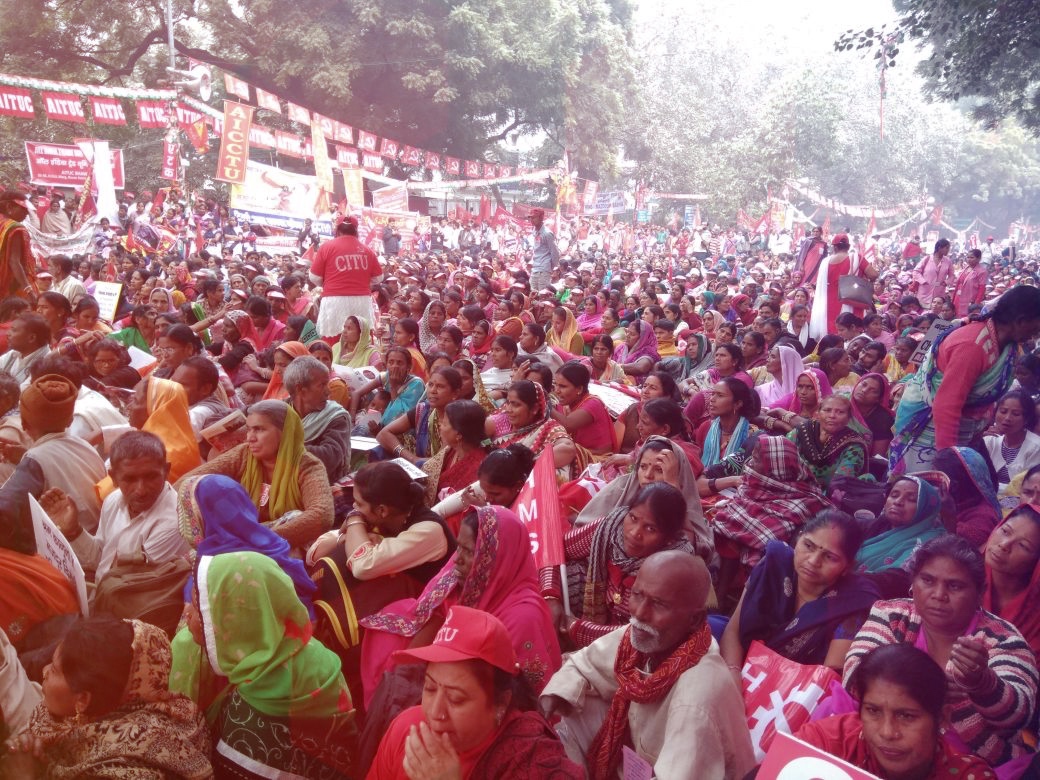 From 9 to 11 November 2017, workers from all over India congregated right in the middle of the country’s smoggy national capital, New Delhi, for what was called the “Workers’ Mahapadhav” or “Workers’ Sit-In”. The joint national convention of trade unions and independent industrial federations collectively organised this historic sit-in that sprawled across the relatively quainter Parliament Street in central Delhi.

The Mahapadhav was convened to protest and condemn the anti-worker policies of the day’s Government, the bonded labor-like treatment of workers under centralised schemes, and the extreme exploitation and inhuman treatment meted out to them.

Issues On The Street

The third day of the protest sit-in – the day I was in attendance – was led by scheme workers i.e workers who work under central Government schemes like Anganwadi (rural courtyard care shelters for mothers and children), ASHA, and Mid-day Meal. Since schemed workers are mostly women, Parliament Street saw a sea of women this Saturday: some in their work outfits, including pink health worker coats, and others in their trade union colors. All came from different parts of the country with varied stories of exploitation and injustice.

About 70,000 workers assembled on a single smoggy November morning, shouting slogans, singing songs, and even dancing in the festivity of dissent.

Despite the dire hardships that the protestors came to dissent against, the mood at Parliament Street was jubilant. They came with hope, which rose as they saw thousands more like them willing to fight. However, it was heartbreaking to see a complete media blackout of the event. Their hopeful faces looked for solidarity from those who have the power to amplify their voices; but, sadly, not one was to be found.

The most prominent of all issues raised was underpayment or delayed payment of wages. The wages that these workers receive are shamefully meagre and not even enough to cover the costs of basic necessities, leave alone send their children to school and bear medical costs. In a country where loans and interest payments doled out to the rich are written off at such large scales, these hardworking, honest people continue to be denied their rights to live a dignified life.

Following are some voices that I gathered from Parliament Street.

Voices From The Street

Rajmani Devi and Anita Devi from Arariya, Bihar are Mid Day Meal workers in a government school. They are contractual, non-permanent workers who also remain jobless for certain periods of time during the year. Their wages are extremely low and not enough for even basis subsistence.

Kaushalya Pradhan, Padmini Naik, and Tapi Bhoi from Sambhalpur, Odisha get wages of Rs 1000 a month. Fifteen years back, Kaushalya started working with a wage of Rs 300 a month and now it is Rs 1000 per month. Since real wages have actually gone down, this works out to be Rs 30 a day. They need at least Rs 300 a day to survive.

“With this kind of inflation, how will we survive?” they wondered.

With ever rising prices, their monthly food bill is increasing, and their paltry salaries are just not enough to cover the rising costs of living. Prime Minister Narendra Modi had promised a monthly wage of Rs 10,000 before he came to power. But, nothing was done once he became the country’s leader. They are all contractual workers, have not received their wages since February. This non-payment of wages is a common occurrence and often, wages are not paid for 4-6 months.

Manjula Arvind, Jyotsna Solanki, Naina Ben, and Pushpa Solanki are Anganwadi workers from Ahmedabad, Gujarat. The group from Ahmedabad consisted of workers, helpers, and some ‘mini Anganwadi’ workers. While the workers’ salary stands at Rs 6300 per month, the helpers’ salary is half of that at Rs 3200 per month.

The condition of mini Anganwadi workers condition is even worse: with a paltry salary of Rs 3600 per month, they do the same or even more work as their full-time counterparts as they have no helpers.

Moreover, they complained that NGOs act as middlemen between the government and the Anganwadi to usurp the funds allotted by the government for the disbursement of the workers’ salaries. They feel that the Modi government has actively encouraged these NGOs to take over the functioning of the Anganwadis. Manjula, who has been working for 40 years, gets Rs 6300, which is the same amount as what a new recruit gets.

There is no seniority system, salary scale, medical benefits, pension, or gratuity. There are funds allotted for pension; but no Anganwadi worker is ever given a pension and they claim that the allotted funds are siphoned off by government officials. There is rampant corruption, they say.

“We are starving while we take care of other’s children,” they told us.

Mid Day Meal Pradhan (chief), Kusum Panchal, and Kamlesh from Panipat, Haryana get Rs 2500 a month. They are demanding proper salary scales, fourth class staff designation, and a minimum salary of Rs 18000 per month. They were hired as cooks, but now have to do safai karamchari (cleaning staff) work of cleaning and washing the school, toilets, and dishes. They get paid for only 10 months of the year. For the last one year, they have not received any wages.

They are demanding that wages be directly credited to their account every month instead of collective disbursement at the end of 5 months, which allows the officials to siphon off the interest amount. Though they are permanent workers, they are often threatened with expulsion from their jobs if they open their mouth, complain or protest the gross injustice that they face.

Durga Tamta, Sarita Rani, and Madhavi Barmal are Accredited Social Health Activists (ASHA) workers from Nainital, Uttarakhand. ASHA workers toil tirelessly for Government schemes under the National Health Mission (NHM) and the National Rural Health Mission (NHRM). All the ASHA workers that we met were contractual. They want to become permanent and thus, be entitled to some basic salary structure.

Presently, ASHA workers do not receive wages – they get a paltry Rs 400 for each delivery, that too if they get the case. They are called at any time of the day. However, if, for example, a pregnancy case gets referred outside, they do not get any money. Durga has been working for 12 years on this meager commission and no salary. She says that the NHRM schemes that provide an interface between the community and healthcare depend on them. They are trained health activists who are responsible for spreading awareness about hygiene, family planning, ante-natal and neo natal care, immunisation, child healthcare, hygienic deliveries, infant, and the mother’s welfare.

They shoulder the burden of making these state-sponsored schemes successful and yet, the government does little for them, treating them as social or voluntary workers rather than employees.

These workers are on the brink of starvation and this is their peaceful call for help. Their panic is palpable, the undercurrent unmistakable.

History is testament to the fact that the collective rage of the working people has brought to its knees, the most powerful of establishments. Thus, the Government would ignore them, if it would, to its own peril.

Monami Basu teaches Economics at the University of Delhi.

All photographs by the author.

Views expressed here are the author’s own and do not represent any editorial line.