Things That Can and Cannot Be Said is a talk-heavy, deeply philosophical, and ruminative account of a peculiar rendezvous between four thinker-activists (and actor) – John Cusack, Arundhati Roy, Daniel Ellsberg, and Edward Snowden. Upfront in its tone and unyielding in its demeanour, the book is a candid exposure to the intimate chambers of resistance and free thought. It is, in most parts, a transcribed memoir of the many conversations that were exchanged between Cusack and Roy, the primary authors of this slim volume. 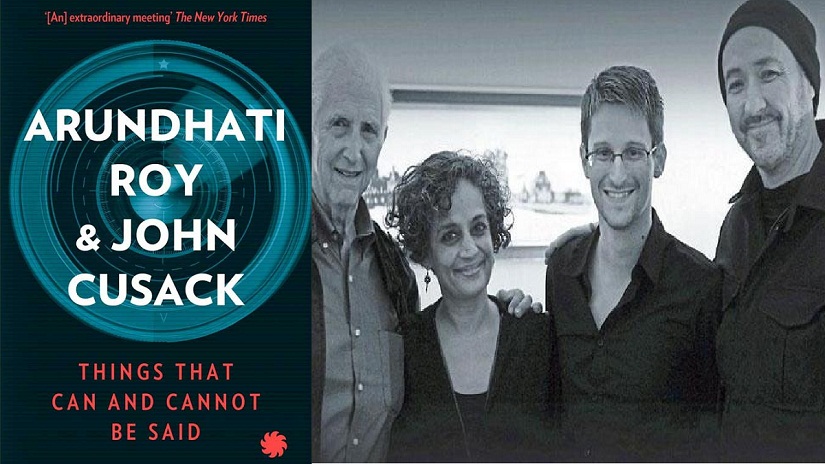 Following is an excerpt:

[The following transpired when Cusack and Roy were accompanying Ellsberg to the Right Livelihood Award (also known as the ‘Alternative Nobel’) ceremony at the Swedish Parliament in Stockholm.]

John Cusack (JC): What is the meaning of charity as a political tool?

Arundhati Roy (AR): It’s an old joke, right? If you want to control somebody, support them. Or marry them.

AR: Embrace the resistance, seize it, fund it.

AR: Make it depend on you. Turn it into an art project or a product of some kind. The minute what you think of as radical becomes an institutionalised, funded operation, you’re in some trouble. And it’s cleverly done. It’s not all bad…some are doing genuinely good work.

AR: They have money from the Ford Foundation, right? But they do excellent work. You can’t fault people for the work they’re doing, taken individually.

JC: People want to do something good, something useful…

AR: Yes. And it is these good intentions that are dragooned and put to work. It’s a complicated thing. Think of a bead necklace. The beads on their own may be lovely, but when they’re threaded together, they’re not really free to skitter around as they please. When you look around and see how many NGOs are on, say, the Gates, Rockefeller, or Ford Foundation’s handout list, there has to be something wrong, right? They turn potential radicals into receivers of their largesse – and then, very subtly, without appearing to – they circumscribe the boundaries of radical politics. And you’re sacked if you disobey…sacked, unfunded, whatever. And then there’s always the game of pitting the “funded” against the “unfunded”, in which the funder takes centre stage. So, I mean, I’m not against people being funded – because we’re running out of options – but we have to understand – are you walking the dog or is the dog walking you? Or who’s the dog and who is you?

AR: Everywhere – not just in America…repress, beat up, shoot, jail those you can, and throw money at those whom you can’t – and gradually sandpaper the edge off them. They’re in the business of creating what we in India call Paaltu Sher, which means Tamed Tigers. Like a pretend resistance…so you can let off steam without damaging anything.