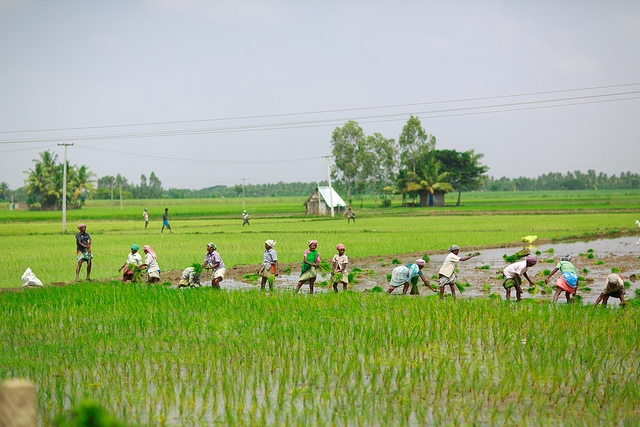 Unless urgent action is taken to mitigate and adapt to the effects of climate change, fluctuating monsoon rainfall and higher temperatures could shave off as much as 2.8% of India’s GDP by 2050 and depress living standards of 50% of its population, says a new World Bank Report.

If no corrective measures are taken, India’s average annual temperatures would likely rise by 1.5 to 3 degrees Celsius by 2050, according to the report titled South Asia’s Hotspots: The Impact of Temperature and Precipitation Changes on Living Standards. This rise could be restricted between 1 and 2 degrees Celsius if preventive measures are taken in line with those suggested by the 2015 Paris agreement on climate change, says the World Bank report released this week.

According to the findings of the report, almost half of South Asia’s population lives in areas vulnerable to climate change and will suffer from falling living standards, mainly due to shrinking farm yields, lower labour productivity and related health impacts. Some of these areas are already underdeveloped, suffer from poor connectivity and are water stressed, the study said.

Earlier this year, the Economic Survey 2017-18 had painted a grim outlook for India’s farm sector, predicting that incomes of farmers may decline by as much 25% in some areas due to the impacts of climate change. Using district level data on temperature, rainfall and crop production, the survey found that long-term weather patterns imply “climate change could reduce annual agricultural incomes in the range of 15% to 18% on average, and up to 20% to 25% for unirrigated areas.” See: Climate change may shrink India’s farm incomes by 25%

Rising temperatures also mean that vast swathes of South Asia would become too hot to work out in the open. For a region where farming is the single largest occupation, this trend spells trouble. A 2016 report by United Nations Development Programme said that heat levels in many locations are already very high even for acclimatised populations. “The lowest income-bracket work – heavy labour and low-skill agricultural and manufacturing jobs – are among the most susceptible to climate change,” UNDP said.

The latest World Bank study identifies vulnerable states and districts as hotspots using spatial granular climate and household data analysis. The report defines a hotspot as a location where changes in average temperature and precipitation would have a negative effect on living standards. These places would not necessarily see higher temperatures than surrounding areas, but have populations that have lower capacity to cope with the climatic changes.

By 2050, Chhattisgarh and Madhya Pradesh in central India are predicted to be the top two climate hotspot states and are likely to experience a decline of more than 9% in living standards

Some 600 million people currently live in locations that could become hotspots by 2050 if not mitigating measures are undertaken, the report says. By 2050, Chhattisgarh and Madhya Pradesh in central India are predicted to be the top two climate hotspot states and are likely to experience a decline of more than 9% in living standards, followed by Rajasthan, Uttar Pradesh and Maharashtra.

Significantly, seven out of the top 10 most-affected hotspot districts are likely to be in the Vidarbha region of Maharashtra, which is already facing a farm crisis and accounts for a large number of farmer suicides.

“These weather changes will result in lower per capita consumption levels that could further increase poverty and inequality in one of the poorest regions of the world,” lead author Muthukumara Mani, an economist in the South Asia Region of the World Bank, said in a statement. “Identifying hotspots will help policymakers in finding specific locations and household types where the resources are needed the most to address the rising risk to living standards.”

The report recommends strategic options to build local resilience to climate change. To offset the negative economic impact in India, it suggests reducing water stress, boosting education and improving job opportunities in non-farm sectors. The analysis predicts that even a 30% improvement on these measures could halt the decline in living standards by almost 1% from minus 2.8% to minus 1.9%.

“Development is indeed the best adaptation strategy, since it is associated with improved infrastructure, market-oriented reforms, enhanced human capabilities, and a stronger institutional capacity to respond to the increasing threat of climate change and natural disasters,” Mani said.

It is clear from the World Bank report that business-as-usual will worsen an already precarious situation. However, the Indian government is not yet seen to do enough to address this. For instance, this year’s union budget, which allocates central government funds and provides a good flavour of policy direction, showed that environment and climate change are not on the administration’s priority list. See: Environment and climate change get short shrift in India’s budget

The budgetary neglect came on the heels of India’s poor performance on the Environmental Performance Index released at the annual meeting of the World Economic Forum in January. The country was ranked 177 out of 180 nations included in the gauge.