Home Geopolitics Foreign Policy Is India in a Catch 22 Situation in the Indo-Pacific? 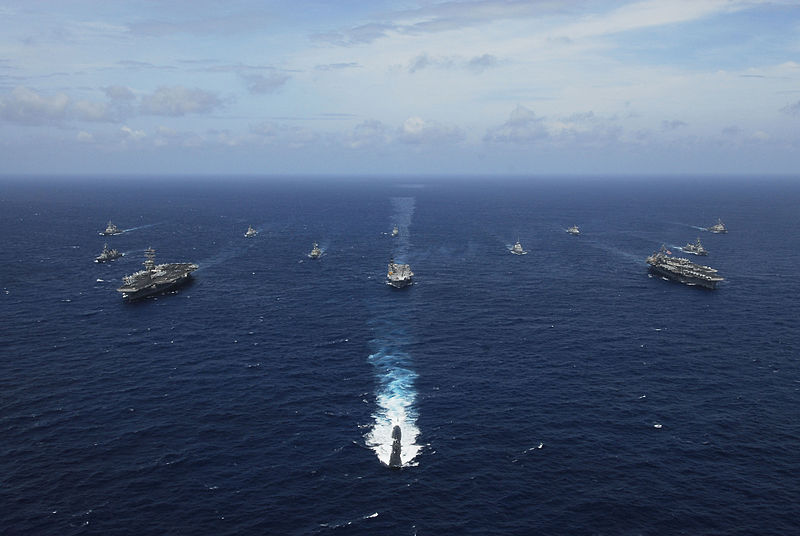 “You can change friends, but not neighbors.”

Today, India, in conducting its foreign policy, seems to be dabbling between distant friends and immediate neighbors. Between the sanctions on Iran and the informal summits (as with the Chinese Premiere Xi Xinping and Russian President Vladimir Putin in Wuhan and Sochi respectively), the most pressing question today that India has to answer is:

where does it stand in the changing global order, especially within the Indo-Pacific?

From Hollywood to Bollywood

A bio-geostrategic concept that seems to have quickly gained momentum in the Donald Trump Administration, the term ‘Indo-Pacific’ was first proposed by the Japanese Prime Minister Shinzo Abe in his famous “Confluence of the two seas” speech addressed to the Indian Parliament back in the year 2007.

However, ever since its revival last year, the precise geographical extent of the Indo-Pacific remains unclear. What we do have is a quip from Admiral Harry Harris, retired US Pacific Command Amy Chief, at Raisina Dialogue 2017 stating that the Indo-Pacific extends “from Hollywood to Bollywood”.

This is not sufficient in making any political opinion on the subject, except that the this project aims to recruit the up-and-rising nations of Asia, in particular the ASEAN countries and India, to join hands with the US in preventing China from becoming a super power.

Today, India is engaging with the idea of “free, open and inclusive Indo-Pacific” policy, as against the US’ “Free and Open Indo-Pacific” policy. While Japan has always supported the Indo-Pacific strategy, Australia too has shown interest in it, perhaps more out of a growing insecurity of China’s Belt and Road Initiative which is fast spreading across Asia. For the Indo-Pacific to succeed, India’s participation is deemed important by the key stakeholders.

However, Modi’s speech at the Shangri La Dialogue in Singapore earlier this year came as a disappointment to the US who responded with tightening the noose around India through trade sanctions. While the US intends to render the Indo-Pacific zone as its harbor in the Asia pacific, India on its part has made its stance of ‘free and inclusive Indo-Pacific’ clear. This also compliments its traditional non-alignment policy.

To look at it rationally, Indo-Pacific ought not to be the primary concern for a country like India dealing with several domestic issues, not the least of which is poverty and the fluctuating economic stability. The recent Kerala floods, which have likely pushed the country’s economy back by a whopping 22,000 crores in its industrial sectors, is a case-in-point. Ensuring economic stability within the country takes primacy over engaging in external power struggles.

Today, more than ever, India needs to ensure an upward graph in its bilateral trade with all its partners, including China. This implies that New Delhi must keep its focus on the Indo-Pacific to ensure that Beijing does not get too comfortable without outrightly irking the Xi administration. This is more so given China’s proximity and potential.

India must also note that the US has a very clear strategic interest in getting the Indo-Pacific project up and running. The measly sum of $113 million that Washington offered as its share for the development of the expansive region goes only shows how little the most powerful nation in the world is willing to invest in a regional endeavour that it expects would actualise its own agendas.

India on its part is not entirely oblivious to this fact, which is why instead of falling for the optics of name-changing, it chose game-changing. Prime Minister Modi’s succinct emphasis on an “inclusive and rules-based order” in the Indo Pacific, and not an exclusively anti-China framework (which is what Washington primarily wants), is a manifestation of New Delhi’s cautious posturing.

At the Shangri-la Dialogue, Prime Minister Modi spoke about free and open Indo-Pacific region. President Trump believes in this vision. India’s vision is aspirational but it is realistic: #NikkiHaley, US Ambassador to the UN pic.twitter.com/6dj18mdIPt

In the recent past, India and China have shown express commitment to improving the terse bilateral. Given the steady rise in Beijing’s defense budget, India cannot afford to go on offensive just yet.

While India maintains that it cannot be a part of the China-Pakistan Economic Corridor (CPEC) as its violates India’s sovereignty, it has shown interest in bilateral engagements in other areas, including border talks, so as to avoid any Doklam-like situations in the future.

China on its part has repeatedly issued statements that CPEC is merely an economic project and does not in any way change China’s opinion of the territorial stand India holds regarding Pakistan Occupied Kashmir (PoK). It has also held that India is an important regional partner.

India and China are both growing economies. With India’s rich manpower and China’s resources, it is in India’s strategic interests to pursue bilateral engagements with its immediate neighbor.

India’s membership in the Shanghai Cooperation Organisation (SCO) provides an entry in to Central Asian markets and trade routes, ensuring continued gas and oil supplies. Loss of both will cost India dearly, in terms of trade as well as bilateral relations. India cannot afford to side with either. While the ongoing Sino-US trade war may have some benefits for India, taking explicit sides will have none.

Indo-Pacific is crucial to India for several reasons, primarily for the growing security concerns in the region, which eventually cloud economic growth.

India is a growing economy and China is infamous for expanding its territories in the name of economic growth. To trust the dragon completely, no matter how sincere its intentions may seem, would be a mistake that New Delhi cannot afford to make. Thus, a proverbial hanging sword like the Indo-Pacific is favorable for India.

At the same time, giving in completely to the idea of the Quad can lead to a critical splitting of the Asian power dynamic: on one side, India, Japan and Australia with the US’ backing, and on the other, rising powers like China and Russia. In this, ASEAN is bound to be caught in the crossfires. This by no means is favorable for the region, which has only recently started its journey up the economic ladder.

At the end of the day, losses need to be minimised wherever possible. India, as a central actor in the Indo-Pacific debate, has to play a responsible role.  Engaging with China in a cordial and strategic manner will go a long way in mending relations as well as ensuring a safe and secure Indo-Pacific to undertake free, open and inclusive trade.

For now, New Delhi remains fully cautious of the fact that the US is not a friend in need, and China is a neighbor that isn’t going anywhere anytime soon.

Ekta Rai is a legal counselor based in New Delhi and is currently attached with The Royal Thai Embassy as a Political Assistant.