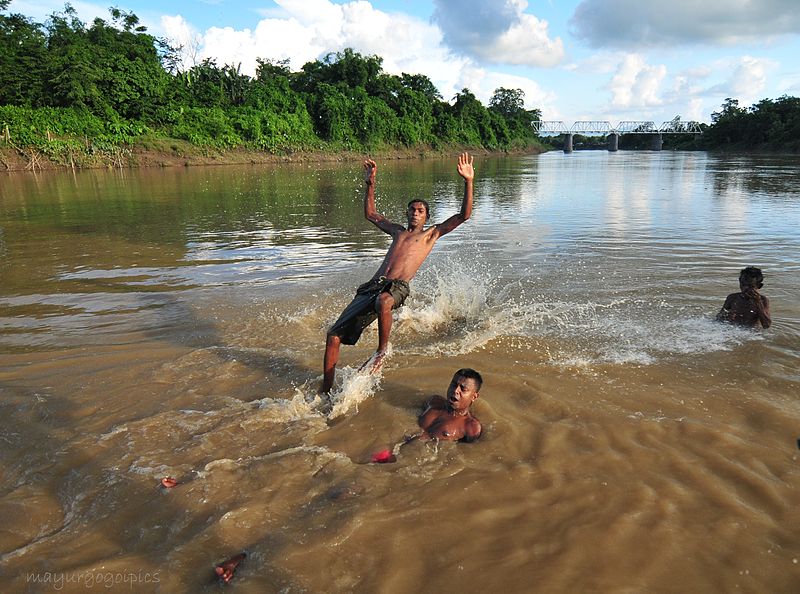 Water is a process and not a thing, as Jamie Linton reminds us. Any body of water ought to be treated as a living organism. Only by looking at its physical forms and human modifications, along with cultural attitudes of people towards water, one can study water in its entirety.

Water is a very social product. It is, therefore, important to identify who interacts with which part of water, what water leads to, and changes in the water bodies at different points of history.

Water touches us in multiple ways. Productive activities associated with water also give us an account of one’s social location. In India, we see an inferior cultural attitude towards people who fish, eat them or are engaged with its trade. Such social classifications push them and categorise them as polluted or inferior beings. It would suffice to say that water is both nature and culture at the same time.

Rivers or most water bodies offer multiple forms of productive activities. They are home to fishing, potters, grazers, cattle owners, milkman, timber collectors from floods, and cultivators of a variety.

The Mishing and Kaibartas communities in the Brahmaputra Valley of Assam (Northeast India) have traditionally been tied to fishing in the riverine and sand bar regions of the state, locally know as char-chaporis. They also happen to be the first permanent settlers in the Brahmaputra littorals.

Fish is a common food in the Northeast, shared across ethnic boundaries. With multiple water bodies at place, it was never at short supply. The 1881 Census of India states that there were about 69,404 persons that were engaged in fishing, of which 18,423 were females and rest males.

It also clearly identified the fishing caste group of Kaibarta, considered Sudras (untouchables) in Assam. This community was identified variously in different parts of Assam. In Western Assam, they were divided into farmers (halwa) and fisherfolk (jalua). The former enjoyed a superior status as compared to the fisherman, despite belonging to the same caste group. In the central parts of Assam, they were even divided into great and small. However, in upper Assam, this distinction collapses.

The very occupation of fishing or activities related to fishing comes with many negative connotations. In Dipak Kumar Barkakati’s novel From Valley to Valley, one gets a peep into how fishmongers are often viewed. One particular encounter with the protagonist of the novel, Kalikishore, where a fishmonger is supposed to have overcharged him for a fish he purchased unravels this. Describing the fishmonger’s character to Kalikishor, who belonged to a ‘high caste’ Thakur family, a character in the novel notes that ‘it is people like this one who bring bad reputation to our people’.

Fishing folks would also be socially marked so that they became visible. Ritupan Goswami in his dissertation Rivers and History: Brahmaputra Valley in the Last Two Decades notes that Kaibarta community in Majuli, at one point, were marked in the forehead with fish-like symbols.

In Assam, we also find occupational division of labour for lower caste groups such as Kaibarta community. Those in the social margins such as Mishing fisherman also fall under such social distinctions. Often referred and identified to as Nadiyals, these groups assumed a lower caste location vis-a-vis their occupation. Even in popular perception, that a Nadiyal lies about his catch of fish is a very commonplace understanding.

Even till the early decades of 20th century, the fishing communities in Assam employed small canoes or skiffs and even throw-nets to fish in the rivers. Longstanding nets were also used for the catch. The Kaibarta community also made nets on their own before the commercial variants began to be circulated.

However, the decisive point in their occupation came when fishing was commercialised. Rights to fish in the lakes were estimated at 155 rupees per annum and in the Brahmaputra at 135 rupees per annum in the year 1835, just in nine years of Colonial occupation of Assam. Few districts of Assam proper — Goalpara, Darrang, Kamrup, Nowgaon, Sibsagar and Lakhimpur — were brought under this purview. The mauzadar (official collector of land tax) was forbidden to collect the money of the lease of fishing. This shows how land and water are marked differently, even administratively.

The notable turn of events took place with the introduction of the Indian Fisheries Act of 1897. Fishing was equated to ‘poaching’, which is naturally surprising given that we generally associate it with larger land mammals like rhinos or elephants. The anti-poaching remedial measures of fishing were extended to Mansiri, Bor Dikrai, Khari, Dikrai, Upar Dikrai, Daigaon and Namiri rivers in the northeast. These were identified to be highly exposed to the trappings of the hill men. These efforts in the second decade of 20th century can be marked as the first attempts to conserve fish in Assam.

The legislation also stipulated the kinds of nets to be used, restriction of fishing time, and the use of dynamite, poison, lime, and other hazardous materials to fish. Violations of any of the above led to punishment and fines. Destruction of fish by explosives or poisoning carried a fine of two hundred rupees and a jail term of two months. On the other hand, erection of obstructions and breaking other regulations related to fishing may amount to a fine of 10 days or a fine of ten rupees for each day of violation.

The criminalisation of ‘hill men’, ‘trappers’, and ‘poachers’ were all carried out in the name of conservation. This can also be seen as one of the first instances where colonial governmentality and legitimacy extended to places where the British government did not have its reach, particularly in Northeast.

In that sense, the colonial government was also against dams or practically any other form of human modification apart from their own. They even tried to persuade the locals from eating dry fish and termed it as a part of ‘fouled dietary’ practice. The indigenous models of fishing were seen as wasteful and harmful to the environment.

While such provisions on fishing were largely successful in the plain areas in the Brahmaputra, up in the frontier tracks, the administration was hard pressed to implement them uniformly. However, certain authorities would keep an eye on constructions of any barriers on the rivers even there.

Yet another reason for such a protective outlook towards water systems was to facilitate good water flow for transport so that profitable commodities such as oil, tea, coal, and people could move around the Brahmaputra, which was a more robust way to navigate through the state than roads until the mid 20th century. This is despite the fact the colonial government made a sustained effort to construct railway lines in eastern Assam to connect the coal, tea and oil industries.

The initial efforts were restricted to connecting the steamers in Dibrugarh from places such as Sadiya, Talap, Makum, Jaipur, and others along with the colonial governments efforts to build railways and roads. Starting with the Dibru-Sadiya Railways in the last decades of 19th century, and from Shaw Finlayson and Company to Assam Railways and Trading Company, it took many years for all-weather roads and railways to emerge. However, in the long run, water transport along the Brahmaputra was totally driven to oblivion due to a host of factors.

The Fisheries Act of 1897 acts as a foundation for all other fishing related acts that we have in India today. However, stigma related to fishing remains. The recent case of Pratapsagar Lake in Sabarkantha district of Gujarat is a case in point. The High Court of Gujarat had to intervene when the fishing licenses in the lake were suspended through an order of the Sabarkantha District Collector following complaints by certain persons belonging to  the ‘upper caste’ Brahmin community that fishing in the lake hurts their religious feelings. This shows the many contours of how fishing and water touch people’s life.

Fish also lights up other worlds. The recent Durga Pujo-related food controversy involving Fortune Oil is but a proof of how food can draw social boundaries. Fish is integral to Bengal, irrespective of caste and creed. Fish and rice are identity markers of the place. Such practices are also shared in Northeast India and large parts of Southeast Asia, among others. Common culinary cultures bring them together, with or without festivals.

Not only fresh fish, but fermented fish and other food like bamboo shoots give life to our gastronomy. If one were to look back at our culinary history, the human race owes a debt to fermentation for its survival, among others. Be it the masatao in Peru made of yucaor, the bread-making culture of Central Asia, or use of shrimp paste to make akhuni (fermented soy beans) in Northeast India, fermentation is deeply rooted in our gastronomic preferences.

There must be freedom in every migrant, and similarly, every culinary world should be independent of hegemony. Food can carry a sense of home with us.

Finally, to reflect upon water is also, inextricably, to reflect upon the social relations of people with their contiguous societies. Water and humans co-produce each other. The interaction changes both of them. Much of social theory is imagined through land, however, as Donald Worster reminds us, human history is not so ‘dry’ after all. Let’s fish!

Suraj Gogoi is a doctoral candidate in Sociology at the National University of Singapore. Through his doctoral dissertation, he aims to write a social history of water and understand state-making in contemporary Assam. Suraj tweets @char_chapori.