Home Geopolitics Foreign Policy Russia and India: As Close As Lips and Teeth? 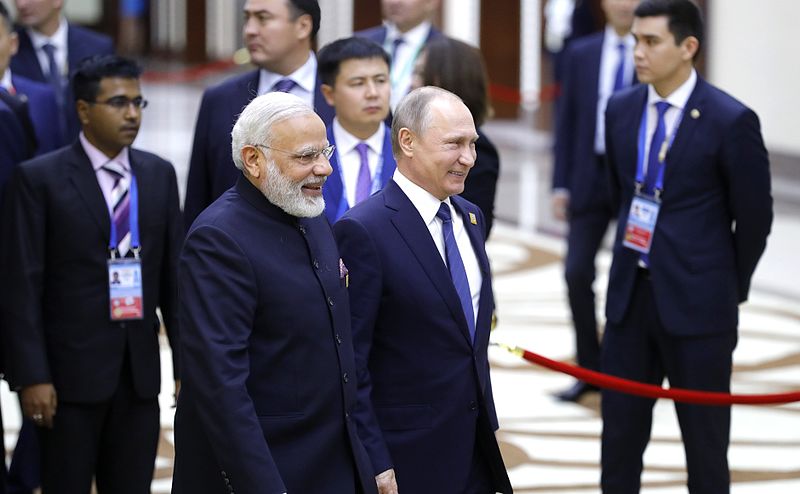 Russia and India signed agreements in the fields of space, nuclear energy, railways and arms sales during President Vladimir Putin’s visit to India on 4-5 October 2018. It is, however, the agreement on arms sale, which called for Russia to supply India with its S-400 air defence system for US$5 billion, that is worthy of note.

Russian arms sales to India are nothing new. India has been a key purchaser of Russian and Soviet weapons for decades. According to a recent commentary by Richard Bitzinger, a Visiting Senior Fellow with the Military Transformations Programme in RSIS, India accounted for 35 per cent of all Russian arms exports from 2013-2017.

However, the fact that the arms purchase was signed during President Putin’s visit and especially some two weeks after the US announced sanctions against China for purchasing the same system from Russia, is significant.

The US sanctions against China were in relation to Washington’s CAATSA (Countering America’s Adversaries Through Sanctions Act) which “..provides sanctions for activities concerning transactions with Russian defence or intelligence sectors.”

CAATSA came into force in August 2017 and is aimed at North Korea, Iran and Russia. With respect to Russia, CAATSA was passed in reaction to the US’ belief that Russia interfered in the 2016 presidential elections, and Russia’s annexation of the Crimea and support of the Donbass region in the Ukrainian crisis.

By securing India’s agreement to purchase the S-400, President Putin has killed the following birds with one stone (listed below not necessarily in order of merit):

First, it was a showcase for the continued trust and confidence of a key customer like India in Russian weapons, in the face of growing US inroads into the weapons market in India. According to Bitzinger, between 2008-2012 and 2013-2017, Indian arms purchases from the US increased by 557 per cent.

Second, it acted as a marketing tool for Russian arms industry and exports; as Bitzinger pointed out, some of the world’s largest weapons purchasers are in Asia and India is among the top weapons buyers. Russia is obviously cognisant of this fact. Apart from China, Turkey also recently purchased the defence system.

Third, it was a boost to the Russian arms sector, which is a growing and important segment of Russia’s exports; its constituents are also an important base of President Putin’s domestic supporters. Moreover, Russia’s weapons industry is one of the few technology-intensive economic sectors which can be considered a world leader, according to a research paper done by Chatham House.

Fourth, it reflected Russia’s continued strong links with India while further weakening the West’s objective since the annexation of the Crimea, to internationally isolate Russia. This goal, in any case, was never a realistic possibility without the participation of a major power like India.

Fifth, it ensured that India’s growing links with the US would not come at the expense of its traditionally strong ties with Russia.

Sixth, it served as a signal to China that the current close Russo-China relationship would not be allowed to jeopardise Moscow’s old ties with New Delhi; in that regard, it also acted as a reassurance to India itself that Russia has not and will not forget its old friends. Selling India one of its key weapons systems is a clear message.

Finally, it assured India that while Russia continues to build its relationship with Pakistan, India’s old rival on the subcontinent, Moscow will not deny India such a sophisticated defence system which could be deployed by India in the event of hostilities with Pakistan. Moreover, China accounts for 70% of Pakistan’s arms purchases, according to Bitzinger.

That fact alone helps to explain that balancing China and Pakistan must have been one of the motivating factors for Russia’s sale of the defence system to India.

Overall, it illustrated Russia’s continued commitment to using its weapons sales to further its foreign policy objectives not only with a key and traditional partner like India, but also with Turkey, a NATO member and China which has been, like India, a major purchaser of Russian weapons.

In that regard, unlike the US, Russia has limited tools in its efforts to build relationships with key countries in the world. Using its weapons sales will therefore remain a major foreign policy instrument.

In ASEAN, Vietnam, Indonesia, Malaysia and Myanmar have been major buyers of Russian arms. It is logical to assume that Russia will remain keen on pushing its weapons sales in the region, and not necessarily just the S-400. Only time will tell whether its sale of this weapons system to India will act as a marketing boost.

Nevertheless, it will be a development which Russia’s arms companies will certainly use in their sales efforts. In reaction to the Indian purchase, President Trump was quoted as saying that India would soon “find out” what the US was prepared to do. Russian arms companies would have to assure potential buyers of major Russian weapons that they would not have to face the prospect of US sanctions. That would be a tall order.

Moreover, major Russian arms sales to an ASEAN country which is a party to the dispute in the South China Sea might not find favour with China. In the current international climate in which Russia’s relations with the US are strained, Moscow’s links with China are touted as being very close.

“While we should be careful not to overestimate the possibility of a formalized political-military partnership between the two, it is clear that Putin and Xi are forging stronger ties…” Read more from our contributor, Torrey Taussig, here: https://t.co/EXopmSmnoI pic.twitter.com/o5B86JFtDg

Still, Moscow would have to carefully consider China’s reaction to any further major weapons supplies to ASEAN claimants to the South China Sea. After all, China is certainly more vital to Russian interests in the wider Asia-Pacific region as well as globally.

This commentary was originally published by RSIS, Singapore. Read the original copy here.