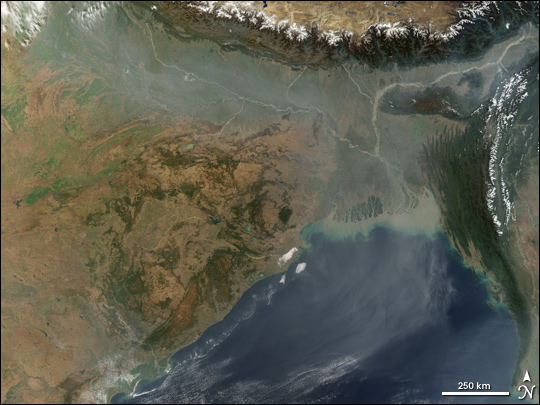 South Asia has overtaken China to become home to the most polluted cities in the world. Fifteen of the world’s 20 worst polluted cities in 2018 were in India, according to the latest data from Greenpeace and AirVisual. The Pakistani city of Lahore and Dhaka, the capital of Bangladesh, also made the top 20, making South Asia a particularly toxic region. 99% of cities in South Asia failed to meet WHO PM 2.5 targets. PM 2.5 is fine particulate matter – less than one millionth of a metre in width and able to penetrate blood vessels with ease –  tiny airborne particles that are linked to a wide range of health problems

In India experts argue that current levels of air pollution represent a “public health emergency” requiring a “full emergency mode” response from local and national authorities. A 2017 Lancet study estimated that 1.2 million people have died because of India’s dirty air and life expectancy would have been higher by 1.7 years if its people breathed clean air.

But the government has failed to take adequate action and activists have rejected New Delhi’s new National Clean Air Programme (NCAP) as insufficient.

Real-time air quality data coverage is highest in Delhi in India. But the majority of countries South Asia lack government supported real-time public stations. Measurements from these countries are from US state department monitors and citizen-led monitoring networks, the most extensive of which is in Pakistan.

Yet, many people living in these cities are adapting to the pollution, rather than putting pressure on their governments to taking action to change their own lifestyles. Pollution wasn’t an issue for voters in the recent Indian elections – with the incumbent government and the opposition remaining silent on the matter, even if it was addressed on the margins of manifestos.

On World Environment Day, thethirdpole.net spoke to people across South Asia about living with the smog and what action should be taken on a personal and government level.

“Air pollution hits me and my family every day. I drive 20 km to reach my office and have to have my car AC on all the time, irrespective of the time of year. It’s just too bad outside.”

So why does he drive a diesel SUV that adds to the pollution? “The family needs a big car. But we have to do something about the pollution. My mother is an asthma patient in her eighties. We’ve had to buy an air purifier for her. Now she can hardly leave her room.”

Sudesh Pandey, a guard at a South Delhi condominium

“I cycle to work. I live around 3 kilometres away. It’s difficult because all these buses and cars and auto rickshaws are constantly blowing smoke on your face. Then I am on duty the whole day at the gate, in a room without four walls. So I get all the dust. Every year, I get a cough in October and that doesn’t get cured till March. I suffer right through winter. I wish more people would cycle like me, at least for short distances. It would improve the air.”

“I see air pollution as a barrier for working mothers. Due to the dust and particles in the air, my 4 year old daughter has coughs and colds all year round, which often lead to breathing problems. We had to see a doctor at least six times in the last year for her treatment. This means more caring responsibility for a mother and less focus on professional work. On top of that my other family members and I also face similar illnesses. Even when I am not sick, I must bathe twice a day if I go out in my city, as a layer of dark dust forms over my skin. This is a hazard by itself and impacts my interaction with others too.

If this pollution continues, I might have to think about migrating out of this city with my family before it becomes any worse.”

Chakraborty lives in Dhaka because of his job but he does not want his children and other family members to live there.

“Air pollution in Dhaka is at a dangerous level. Dhaka is the second most polluted city after Delhi,” he said.

“Brick kilns are the prime cause of air pollution followed by construction work. Besides diesel vehicles and toxic fumes from industries are polluting the air in cities like Dhaka, Chittagong and other big ones.

Authorities should seriously regulate the construction industry to control air pollution. The government must also monitor and impose strict laws against the growth of unplanned construction. A little behavioural change can reduce nearly total pollution from construction work.”

“Air pollution is not well noted by the environmental activists in the country. Controlling air pollution is a civic responsibility. I myself practise the norms of ‘refuse the use’. Less use of resources results in less pollution. Keeping oneself practicing an environment friendly lifestyle and raising a voice for environmental governance are a must for the fresh air in the cities.”

At a country level, weighted by population, Bangladesh emerges as the most polluted country on average (Source: AirVisual 2018)

Nepal’s capital of Kathmandu is well known for its bad air quality. The city of more than 3 million people sits in a bowl shaped valley, which helps trap pollutants. Rampant road construction and urbanization and the rapid growth of vehicles has put citizens in danger. While there is little research on the real impact of pollution on people’s health, and only a few monitoring stations, the evidence is clear to anyone living in the city. On May 31, 2019, the US embassy’s air pollution monitoring station in Kathmandu showed PM 2.5 levels reaching 175, which is “unhealthy for all”.  It has been reported that air pollution causes about 35,000 deaths every year in Nepal.

Khanal is one of the few brave people who commute by bicycle in the city. “Though there has been some reduction in dust pollution, overall pollution is increasing. I use a mask which is 94% efficient for PM 2.5 but I have to change my filter every 5 to 6 days, which costs around USD 5, which is quite expensive. Two years ago I used to change filters every 10-12 days – this shows the pollution is getting worse.

We are blind when we talk about development. We don’t even think small actions can help.  For example, we could build cycle lanes, we could effectively monitored development projects, we could have an effective vehicular emission checking system in place. But nothing has been done except widening roads and importing more and more vehicles.  I have campaigned for years on air pollution but nowadays I also feel like nothing will happen when I talk.”

Shrestha spends 16 hours a day driving his is cargo van. He says life has become terrible as air pollution is rapidly increasing in Kathmandu.

“The only thing I can do is buy a mask and then close the windows of my van whenever possible,” said Shrestha. Using a mask has helped him cope with the tonsillitis and dust allergies he suffers from, but he doesn’t think he will be able to do his work for much longer if pollution doesn’t improve. “Most of the drivers get sick but they don’t really care because there isn’t a choice,” he added.

Bikash has never seen any air pollution data but he believes the media reports. “I think vehicle emissions are more serious, but dust pollution has an impact on my health. Every day I feel like I am living in hell. The government carries out vehicular emission tests every year but if you fail you can pay a bribe and get your emission clearance certificate,” Bikash said.

Rizwanullah says Karachi’s air is highly polluted and gets worse in winter when the sea breeze dies down. He blames the huge amounts of automobiles on the roads, the factories and trash-burning.

“If you can get to point B from point A in a yellow CNG rickshaw why do it with an imported 1,500 cc monster engine?” His family of four has been “car-free” now for two years. “I’ve been commuting by bike for 31 years, and for the last two years I have done the bulk of shopping on my bike too,” he said.

Rizwanullah with his children [image by: Sara Khan]Rizwanullah and his wife home school their children and only go around the city on Saturdays when there is less traffic to minimize their children’s exposure to air pollution. He said they also try to use gur (jaggery) and honey instead of sugar, which is believed to counter air pollution in the Yunani tibb [Arabic-Greek traditional medicine].

Thomas, who is a nurse working at a private home in Karachi, drives a motorbike covering 35 kms everyday. “I see more bikes, more dust, more construction as well as demolition, and burning of garbage everywhere”. With rising pollution the city by the sea is becoming “less and less liveable” he lamented.

But when it was pointed out that his bike, that he has been using as a mode of transport now for 20 years, may also be contributing to carbon emissions, he said he did not have much choice: “How do I get to work?”

When it was suggested that he could use a bus, he said: “No, never! Not the kind you have in Karachi. It’s not fit for human beings! By the time I get to work, I’d be stinky, my clothes bedraggled and not in the right frame of mind to attend to my work.”

However, if Karachi had “air conditioned, clean, punctual” buses like in Dubai he’d be the first “to give up the bike” which costs him Rs 150/ day (USD 1) making a huge dent in his pocket, compared to Rs 50/day a day for the round trip by bus.

Roger Thomas says people are packed like sardines on the buses in Karachi so he commutes by motorbike. (Photo: Zofeen Ebrahim)

Abid said that Karachi’s air quality is “regularly poor due to the use of substandard fuel in the transportation sector”. He also pointed out that the recent government drive to demolish encroachments around the city has contributed to the air pollution. Cities in Punjab province – such as Faisalabad and Lahore – have far worse air quality than Karachi because there is a lot more industry and agriculture. “Punjab also faces a meteorological misfortune where the cool air stays trapped close to the ground, preventing air pollution from dissipating,” Abid added.

This report was originally produced and published by thethirdpole.net. Read the original copy here.