Home Geopolitics Foreign Policy What India Must Focus on in Myanmar 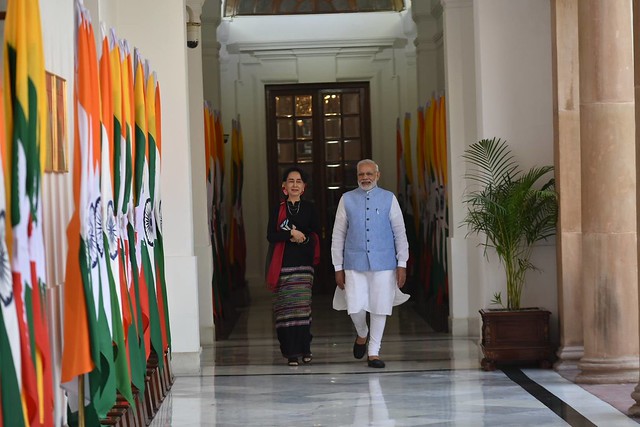 For the Indian foreign policy establishment, especially under the current Narendra Modi government, Myanmar has been a pivotal country. Strategically placed at the intersection of South and Southeast Asia, it is at a civilisational crossroads of sorts. As Myanmar is the only ASEAN member state to share a border with India, the country is where New Delhi’s Act East Policy (AEP) and ‘Neighbourhood First’ policy (NFP) overlap.

The first term of the Modi government witnessed much activity on the eastern front, with the AEP and NFP together birthing a new template of outreach. Most of the work happened under three key clusters: trade relations, developmental co-operation and security collaboration. A fourth sub-cluster was the provision of humanitarian assistance to ease the Rohingya crisis, which erupted in August 2017 following an attack by Rohingya insurgents on Myanmar border police outposts in northern Rakhine State.

The upward tenor of the bilateral ties was further embellished by a slew of high-level visits from both sides, including a visit by Modi to Myanmar in September 2017, a rare eight-day visit by the Commander-in-Chief of the all-powerful Tatmadaw (Myanmar defence forces), Senior General Min Aung Hlaing, to India in July 2017, and a visit by Myanmar President, Win Myint, to India in December 2018.

In many ways, the renewal of the New Delhi-Naypyitaw relationship was watered by the democratic transition in Myanmar that saw the election of a civilian government in 2015, led by Aung San Suu Kyi’s National League for Democracy (NLD). Subsequent events, particularly the steady souring of the relationship between Myanmar and the West over the Rohingya crisis, saw Naypyitaw directing its focus on fortifying its relationships with old-time regional partners, New Delhi being a prominent one. The other, of course, is China.

As geopolitical circumstances would have it, India has slowly emerged as a crucial counterbalancing ally for the Tatmadaw and the NLD government as a more assertive Beijing expands its economic presence and political clout in Myanmar. This has essentially translated to stronger political complementarities between the Modi and Suu Kyi administrations and deeper military-to-military collaborations. Thus, when noted journalist and close Myanmar-watcher, Bertil Lintner, recently noted that India and Myanmar are becoming “brothers in arms”, he was certainly not exaggerating.

Yet, as the government in New Delhi prepares for a second consecutive term, much work remains to be done across all fronts. In this regard, three aspects remain most critical for India in Myanmar: swift implementation of proposed development projects, diversifying the bilateral trade profile, and maintaining close strategic collaboration along the overland border and maritime sectors. Together, these can help New Delhi mount an effective response to China’s rapidly growing clout in Myanmar, which is certainly one of India’s key goals in the country. A fourth, more complicated but imperative, policy objective for India should be to change its passive, no-pressure position on the Rohingya crisis to a more moral, justice-oriented stance.

On the development assistance front, the Modi government has done well to steadily scale up core budgetary aid to Myanmar. In fact, the estimated allocations in the last two union budgets (FY 2018-19 and FY 2019-20, interim) are the highest ever extended to the eastern neighbour by New Delhi, notwithstanding the actuals spendings that are yet to be made public. Besides, the EXIM Bank also extended a $198.96 million Line of Credit to the Myanmar Foreign Trade Bank (MFTB) in 2015.

Most of the Indian money has gone into funding Small Development Projects (SDPs) across a host of sectors, such as connectivity, Information Technology, agriculture, education, capacity-building, and other training infrastructure. Of these, the Border Area Development Project (BADP), which aims to improve internal connectivity and social infrastructure in Sagaing Division and Chin State (both bordering India), is of particular significance. India could very well expand this developmental template to the underdeveloped hinterlands of Myanmar, allowing New Delhi to play a pivotal role in bottom-up, people-centric development in the country.

Despite the advances, India needs to ensure faster implementation of proposed projects and hasten the completion of those under construction. Amongst the latter, the Rs 2,904.04-crore Kaladan Multi Modal Transit Transport Project (KMMTTP) is the most crucial in terms of connecting India and Myanmar along the eastern sub-region. Currently in its final stages, the Modi government must prioritise the swift completion of the long-pending project, which also entails India taking operational control of the Sittwe port in Rakhine State. In this regard, the newly-established Logistics Division within the Ministry of Commerce can play a decisive role in ensuring faster tendering of construction resources.

Rapid implementation of big-ticket projects such as the KMMTTP become even more imperative for India given the frontal competition it faces from China. Beijing is already in partial control of a deep-sea port in Kyauk Phyu (further south of Sittwe in Rakhine), and soon plans to build an SEZ around it. As part of this, it is also operating a twin oil-and-gas pipeline from the Rakhine coastline to Yunnan Province. The Xi government has also signed a CPEC-like agreement with Myanmar, called the China Myanmar Economic Corridor (CMEC), parts of which entail construction of an expressway and a superfast railway line from southern China all the way to Rakhine State via the central urban centres.

On the bilateral trade front, the second Modi government has a solid headstart: over the past one year, the total trade value has gone up by 19.2 percent (or $15.4 million), standing at $95.6 million as of April 2019. In addition, a higher volume of goods, worth $128.9 million, was traded across the land border checkpoints in Tamu-Moreh, Reed and Htalana. Compare this with China’s border trade volume with Myanmar, standing at a total of $3.3 billion between April-September 2018 with a single border checkpoint at Muse alone recording a trade value of $3 billion during that time period.

Most of India’s overland trade is informal in nature and also includes illicit exchanges. New Delhi could work towards partially formalising and diversifying this border trade through proper checkpoint registry mechanisms, as also mused upon by the current Indian ambassador to Myanmar in a recent interview. At the same time, there is much sense in allowing some of the localised informal trade to continue, on which many border communities depend for their everyday sustenance.

On the security front, there has been a flurry of activity. Even as India went to polls beginning April, the Indian army had already conducted “joint” operations in February with its Myanmar counterpart to contain ethnic Rakhine insurgents along the Mizoram-Chin State border. Later, in May, it staged a second round of “coordinated” operationsagainst the National Socialist Council of Nagaland-Khaplang (NSCN-K) and three other Indian Insurgents Groups (IIGs) along the Manipur-Sagaing border. The Tatmadaw had separately acted against the NSCN-K in February.

However, the Tatmadaw has refused to publicly admit any “joint” operations with India, instead emphasising on its support role in apprehending Indian insurgents operating in Burmese territory. While this might be somewhat embarrassing for India, it was not entirely unforeseen given the Tatmadaw’s own regional political compulsions, especially with China breathing down its neck.

Yet, under the Modi government’s first term, the security establishments of India and Myanmar grew closer than ever before. Back in July 2018, the Indian government formally expressed its desire to modernise the Myanmar army and navy, which later manifested in big-ticket arms deals, bilateral training exercises and high-level visits from both sides, including a recent meeting of Indian defence secretary, Sanjay Mitra, with the Tatmadaw’s Commander-in-Chief. Evidently, by negotiating through past bitterness, both militaries have incrementally built trust and synergy, not just along the overland border, but also the geostrategically pivotal Bay of Bengal maritime sector. For India, partnerships in the latter hold the key to keeping an ambitious China at bay.

However, India’s outreach to the Tatmadaw has a problematic and morally dubious angle to it. The Myanmar military today stands accused by a host of international entities, including a United Nations Fact-Finding Mission, of serious war crimes, including genocide, perpetrated against the stateless Rohingya Muslim community in Rakhine State and other ethnic minorities in Shan and Kachin States. The International Criminal Court (ICC), too, is running a parallel inquiry against senior Tatmadaw generals. India, on its part, has refused to take a strong stance on this, instead insisting on the “complexity” of the issue and Myanmar’s sovereignty.

In its second term, the Modi government must reverse this if it wishes to establish India as a responsible and morally firm regional power. At the very least, it must pressurise the Tatmadaw to allow an independent United Nations body to investigate its alleged wrongdoings, and prosecute the guilty accordingly. Simultaneously, it must convince the Suu Kyi government to shift its emphasis on bringing accountability for alleged war crimes and internally pressurise the Tatmadaw to deliver justice. While this is a long shot, given Suu Kyi’s delicate relationship with the military, New Delhi must do its bit.

In all, the Modi government has much to look forward to in Myanmar, largely based on the significant amount of work it has already accomplished. It must do everything to fight the complacency that the Indian establishment is infamous for and only accelerate the pace of existing interventions to deliver on time. That is, without a doubt, the most sustainable way to stave off, or at least balance, China’s influence in Myanmar, and simultaneously, take the AEP and NFP to loftier heights.