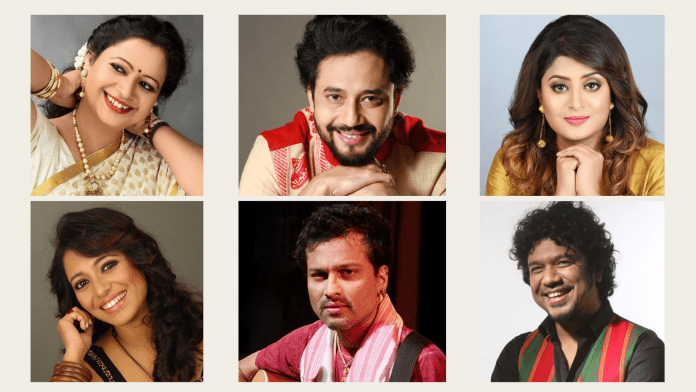 It was 14 April, a Tuesday afternoon. For the Assamese, it was no ordinary day, but the beginning of a new year. Tarali Sarma, the celebrated singer and composer, received a call from a dhuliya (Bihu percussionist), probably 23 or 24.

Tarali has her own regular dhuliya in her troupe, but this young man deputises in case of an absence. Every year, he travels to Guwahati in early February, rents a room and begins rehearsing for Bihu functions and recordings that take place in March, April and May before the monsoons set in.

On the call to Tarali, he rued how he is stuck in the lockdown and cannot gift his girlfriend the kopou he had planted back home – the Assamese word for foxtail orchid treated as an emblem of love and Spring in the culture.

The singer played it down – the kid was merely being sentimental. But he was only limbering up before coming to the point.

“Tarali ba, I have not eaten anything for the last one-and-a-half days, will you please give me some money”, he asked.

“It was a big blow to me. And for a few minutes, I did not know how to respond,” the National Award winning singer told me as we spoke about COVID-19 and how it affected Assam’s most well-known young singers.

The crisis could not have visited the Assamese musical scene at a worse time. Most musicians – big and small – earn for the year in the Bihu season through concerts organised in every nook and corner over the first two months – Bohaag and Jeth.

Talking to me, the singer Dikshu called it a ‘bhoyaboho loss’ (huge loss) for the industry. He explained to me how this crisis will hit every worker in the field.

“In Assam, the singers are usually the producers too. Since there was no Bihu, most of us singers will not be able to make new songs and videos. So, I doubt that you will be able to see many music videos until the next year. This will also mean less work for makeup artists, dancers, actors, camerapersons, spot boys and, indeed, it’s a chain,” sighed the songster best known for his song Aah Oi Aah, sung in the Kamrupi variant of Assamese (to ‘show that serious stuff can be discussed in this language as well’, he had told me in another conversation).

Moving away from the usual experience of performing the cynosure in a sprawling maidan teeming with people and brimming with energy, most of these singers find themselves doing live shows in front of a screen, on Facebook or on Instagram. How have they acclimated to it?

Anindita Paul, the widely-revered singer, has a thoughtful response. Echoing concerns raised by people like Lopamudra Mitra, Anindita wondered if music itself will become something free of charge. Singers have often been coming live from pages of established groups and organisations as well, but they have not been paid.

“This is wrong, I feel,” Anindita said, “Some of these organisations would have held Rongali Bihu as usual which means they do have funds kept aside. I am not saying that you should pay the actual remuneration. But if you are asking the artiste for a one-hour involvement, it behoves you to pay the person at least something for the labour and hard work.”

Papon, stuck at home in Mumbai, seems to agree.

“I have overexposed myself in charity,” his voice betrayed a sense of frustration. A big cheese not only in Assam but also in the Hindi film industry, Papon explicated how it has reached the question of survival not just for poor artistes but for everyone.

“At any given time, all of us have about three months of reserves to use up. This is the story of every artiste at her ot his own way of living,” Papon sighed. The singer also reminded me that the predicament precedes the COVID-19 crisis and goes back to the agitation against the controversial Citizenship Amendment Act (CAA) that had brought the state to a standstill.

“Also, 2019 saw a recession which was not openly talked about, but felt,” he said.

The lockdown began before he could be discharged and allowed to travel back to Guwahati. The area where the singer owns a house in Mumbai was sealed, and he had to instead move to a suite in The Lalit where he would spend the next fifteen days composing a few numbers for his new album Sila (Kites).

“Cinema sthobdho, theatre sthobdho, music sthobdho (everything is in a standstill – cinema, theatre, music),” Zubeen said in his characteristic tone when I asked him how the pandemic has impacted the entertainment industry.

“The annual calendar for the mobile theatre troupes also begins around this time. They are also suffering,” he said, before adding, “Everyone is reduced to doing TikTok at home now. TikTok is not culture.”

Among all the musical projects suspended due to COVID-19, Zublee’s new album is one. The creator of Maati – The Folk Factor and its sequel Maati 2, Zublee Baruah said that the album was scheduled for a pre-Bihu release, but was indefinitely postponed.

“I also had a national release planned for April. We could not shoot for that. I don’t know how long one will have to wait,” said the singer who – through her NGO named Zublee Foundation – has also engaged in raising organ donation awareness in the northeastern region in the last seven years.

Zublee too reiterated most of the concerns voiced by other singers. Like Dikshu, she too said that it is in the run-up to Bihu that singers release a few songs and videos. This is done also with the hope that a few more shows will be added to her/his kitty.

“And that investment is done already… because the songs are completed by February and shared with the public sometime in March. Everyone expects that the money invested will come back by way of Bihu shows,” the singer spoke from experience.

Keeping the abandoned projects aside, have these musicians created any new songs related to the crisis?

Zublee has. Her latest song Xui Thaak, Guwahati (Go to Sleep, Guwahati) is an ode to the city noiseless under lockdown. Written by Diganta Bharati, it goes:

You are safe if you do

Let the lockdown be your bed

You are out of danger if you do.)

The singer, however, admitted that there are a lot of limitations in working remotely.

“Creative kaam (work) is very difficult to do over the phone,” Zublee complained, “It’s like, a little bit of music is done and sent to me, I explain a couple of things and send it back. In reality, you need to sit down with the programmer and create the piece.”

As I write this, Zublee is creating a second song on COVID-19. Unlike Xui Thaak, this one is a playful take on a couple separated by the lockdown and whether distance intensifies affection. It is being penned by Rajdweep.

Paar Hobo Ei Xomoy (This Too Shall Pass) is a song written, composed and shot by Papon during the lockdown. It speaks of hope and has become an immediate chartbuster both locally and nationally. Many Assamese actors and choreographers have since interpreted the song in their enactments and dance covers.

“Music heals, distracts, takes one away from stress,” Papon began as we resumed talking, “Starting from the utterance of ‘Om’, music brings you calm.” It is to spread a sense of hope and positivity that I made this song, he said.

Was he giving a message? Yes, ‘do not worry, do not lose yourself. If need be, rebuild yourself’ was the pith, said the Moh Moh Ke Dhaage singer.

Often compared with Zubeen even though the two maestros have always gracefully avoided the weighbridge, Papon recently also revisited his song Din Guzre from the album The Story So Far because its lines, written almost fourteen years ago, seem to resonate with the current times:

(Now I have started speaking to myself all the time

The loneliness is resounding

And silence gives me company).

The other day, he shot a quick video of the song on his phone and released it for his fans.

If Zubeen will try and finish Sila (Kites) in this period, Tarali plans to call her new album Deuka (Wings). It was supposed to release in January this year, but CAA delayed the plans. Deuka will be her first album after the super successful Henguliya, released in 2012.

In between, she has done music for films like Othello (2014), Calendar (2018), Kaneen (2019) and Fireflies (upcoming). Another major project nearing completion is her Borgeet (Assamese folk music) album Bhokoti. Singers are birds of passage and home is like a ‘guest house’, as Tarali Sarma’s mother would often complain.

“Now I realise, if you can give somebody a good gift, it is probably time,” Tarali said.

Anindita Paul too felt that this time must be used to do things left undone for long and to mend relationships ‘not just with a husband or wife, but indeed with anybody or anything’. She does not have a song planned for these hard times.

“Maybe people (who create songs based on a new development) have a noble intention guiding them, but that’s not me,” Anindita said, “Of course, people like Bob Marley and Bhupen Hazarika were reformers and wrote songs on every facet of life and society. I am not even discussing them here.”

Like Tarali, this is the first time in years that she has spent a considerable time with her near and dear ones. Mumbai has been her professional home for the last seventeen years and during this visit to Assam, she arrived in the nick of time, on 22 March.

At The Lalit in Mumbai, Zubeen Garg, however, was dying to go back home.

“Kimaan hotel’ot xomaai thaakim poisa bhori bhori?” (How long can one stay locked down inside a hotel by paying so much?), he had said in exasperation. One 8 May, he booked a bus for four people – his wife Garima Saikia Garg, his manager, his long-time musical associate and himself – all the way from Mumbai to Guwahati. It took them five days to reach Guwahati.

“It was my longest journey by road. Kolkata I had done before, but not this far,” he told me on May 12 from his room in Radisson Blu where he was quarantined before being allowed to go home two days later.

As I posed to him the question about revisiting old songs that may be relevant to these times, we found ourselves riffling through his robust oeuvre. He stopped at Xonere Xojowa Poja Johi Khohi Jaay (The hut made of gold/ Is now dilapidated) which encapsulated another crisis that had wreaked havoc in Assam for decades – violent tensions between insurgents and the state.

I told him that the song that I would swear by in these extraordinary times is his ode to hope and to revolution:

A deluge will come

And killing all vices).

is a Senior Writing Fellow at the Centre for Writing and Communication, Ashoka University. He is also a freelance journalist regularly contributing to HuffPost India, The Wire and various Assamese dailies.