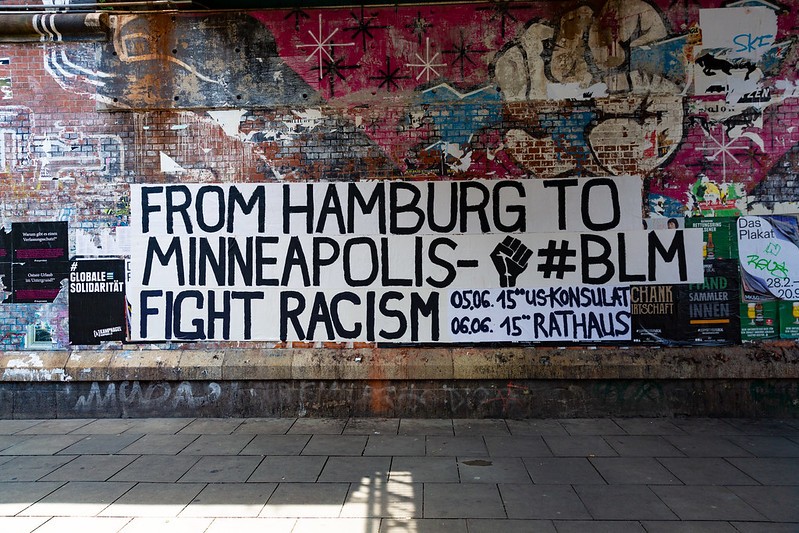 On 25 May, Derek Chauvin, a White American police officer, killed George Floyd, a 46-year-old Black man in Minneapolis, Minnesota. It was in broad daylight that Floyd pressed his knee on Floyd’s neck, like a trophy hunter. There were eighteen complaints against him, and he has now been charged with second-degree murder. Three of his other colleagues who stood by and did nothing to stop the cold-blooded murder are also facing charges.

These are among many institutional murders in the US that have now sparked worldwide protests. It revealed the inherent and institutional structures of racism in the country. “I Can’t Breathe” did not die with Floyd and Garner. These words became anthems of anti-racism and social justice movements worldwide.

The #BlackLivesMatter movement which emerged in 2013, continues to campaign against racism within and outside the US. It derives its inspiration from historic political struggles for equality, liberty and justice, and continues to represent the legacies of anti-colonial struggles, civil rights movement, other progressive and radical sociopolitical movements.

The protests across the US, Europe and other regions across the world reflect the frustration and despair of people of colour in the face of pervasive racism in different parts of the world. Despite earlier movements for racial equality, Black, Asian, and minority ethnic communities in the US, Europe and Asia continue to face various forms institutionalised discrimination and structural violence in their everyday lives.

White supremacy, as an ideal, owes its origins within the historical events of transatlantic slavery and European colonialism that still inform and underpin racial and other forms of discrimination within and outside the western world. Therefore, movements like #BlackLivesMatter carry global significance.

The #BlackLivesMatter movement has also opened up wounds of all other forms of discrimination in different societies across the world.

Discrimination against Muslims, Kashmiris, Dalits (untouchables) and tribals in India, non-Bengalis and religious minorities in Bangladesh, Ahmadis, Baluch, Hindus, Sikhs and Christians in Pakistan, Tamils in Sri Lanka, Rohingya in Myanmar, Tibetans and Uighur Muslims in China, besides other forms of discrimination based on gender, sexualities, dress and food habits, remains rampant. They form the unadulterated reality of our unequal capitalist world.

The forward march towards an egalitarian and non-discriminatory world depends on people’s resolve to fight against all forms of discrimination based on prejudice.

In recent times, there has been a global upsurge in right-wing politics and reactionary movements, which give patronage to the politics of hate and othering. They breed discrimination, violence and inequalities in different parts of the world. The liberal and right-wing commentators offer Eurocentric Lockean social contract as an alternative to re-establish peace and social order, based on ideals of hierarchy and domination.

Highs and lows of intersectionality

Many radical, socialist and progressive movements consider identity politics as the cultural logic of failed capitalism. They argue that identity politics destroys the unity of the working classes and marginalised communities’ fight against the capitalism system. In reality, these two ideological trends of progressive and radical movements need to understand that race, ethnicity, gender, and class intersect with each other within a capitalist system.

Intersectionality helps us understand the existence of multiple and overlapping forms of exploitation, violence and oppression. This realisation is important to develop clear emancipatory political strategies.

Also read ‘With Trump in the White House, the Fight for Racial Justice Gets Nastier’

The intersectionality of race, gender, class, caste, sexuality and other marginalised communities are important indicators to understand different layers of exploitations and oppressions within the hierarchy of capitalist systems. The different forms of identities-based discrimination, oppression and exploitation exist not in separation, but in unity with different structures and processes of capitalism.

The politics of intersectionality ignores the role of pre-existing unequal social relations in shaping conditions of production and reproduction within capitalism. The failure of class politics and defeat of revolutionary movements during the 1990s led to the rise of intersectionality as an approach to understand exploitation and discrimination based on personal characteristics of individuals, like race, gender, sexuality, caste, region, territoriality and ethnicity. The postmodern and poststructural theories provide the ideological foundation to intersectionality identity politics.

The idea of intersectionality attempts to find alternatives within existing capitalist system that reproduces the gender, class, caste and race-based inequalities and exploitations that results in precarity and proletarianisation. The existing archetype of intersectionality debates and discourses have failed to locate the fluidity of power relations and sites of struggles against identity-based violence, exploitations, dominance and discriminations within and outside the communities.

The critiques of intersectionality do not reject and disregard the realities of multiple forms of power structure that exploit, discriminate and kill on the basis of individual identities. The ideas of identities are not just about atomised, abstract and individual self-reflections. They also involve the individual identity’s organic relationship and interactions with environment and fellow beings.

The individual builds relationships with others to fulfil their own desires and needs that give meaning to their life. This generates the foundation of collective identity based on voluntary but natural relationships. These relationships are territorialised and de-territorialised by multiple identities created and destroyed as per the requirements of the neoliberal capitalism under globalisation.

The growth of European reactionary nationalist politics led by the British Nationalist Party and English Defence League in the United Kingdom, UKIP in England, the National Front in France, New Dawn in Greece and Jobbik in Hungary are classic examples of reactionary identity politics that promotes a cultural logic of failed capitalism.

Four centuries of globalisation led to the normalisation of precarity, and the emancipatory labour and trade union movements have become wage bargaining movements, promoting representative careerism in the name of affirmative actions. Such an approach helps hide the institutional discriminatory practices of capitalist structures led by the patriarchy of White supremacists in Europe and Americas and the Brahmanical Hindu caste order in the Indian subcontinent.

The Dalit and tribal movements in India, LGBTQIA+ movements, anti-racism movements, women’s movements and indigenous movements to save their land, livelihood and forests are emancipatory identity politics. Therefore, it is important to embrace progressive aspects of identity politics, develop intersectionality and transcend differences as a political strategy to strengthen emancipatory struggles for liberty, equality, justice and fraternity.

The progressive ideological engagements with intersectionality politics can reduce the isolationist approach of identity politics. It is impossible to fight racial, gender and caste discrimination without fighting capitalism. The academic left and their privileged politics must get on with it without creating further mirage of theoretical complexities.

The struggle against racism, patriarchy, caste, sexism and all other forms of discriminations and exploitations are struggles against capitalism. Let the everyday realities of people with their subjective and objective conditions guide an organised and united struggle for alternatives to all dehumanising structures of capitalism.

Finally, as the significance of the #BlackLivesMatter movement goes global with its open and inclusive approach, it is important to call for a borderless revolutionary internationalism based on experiences of local sites of struggles against all forms of inequalities, injustices and exploitations. The local, national, regional and global alliance of revolutionary collectives can only help in democratising the world and ensure peace and prosperity for one and all.