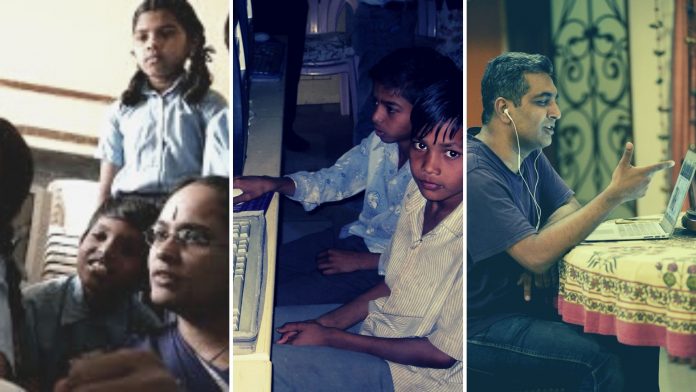 During this COVID-19 pandemic, most of the women whom I know to be working as teachers in schools, narrate their ordeal of delivering online classes while attending to their household chores. There are various memes circulating on social media about it. They evoke more tragedy than laughter.

And then, there are those expressing on social media about how they are proud of their parents, especially their mothers learning to indulge in various online activities – of cooking, knitting, singing and so on. These are primarily those who are privileged by their class and have access to computers, smart phones, internet and electricity.

I too was tempted to make the infamous Dalgona coffee (one of the more recent internet fads) once. During the process, I realised that it required luxurious doses of coffee, milk, sugar, ice, and chocolate (for some garnishing), along with access to a digital platform. Neither Dalgona coffee nor internet is accessible to everyone.

But Dalgona coffee is a luxury, education is not. Teachers are struggling to get a hang of how to use a computer or the smart phone for online classes. They not only have to teach, but indulge in creative tactics to engage the students and please their parents at the same time.

These teachers, if they are also mothers with kids, are additionally burdened. We know that India is a country where usually, mothers are expected to be more involved in their children’s lives than the fathers. In addition, instances of cyber bullying in the sphere of online education are also being reported.

India is a country where school teaching is a highly feminised job with low pay. At the same time, it is a country where women are still lagging behind on access to education. Women are still deemed fit only to be in the private sphere of the households and be the ‘good’ woman. Anyone who transgresses these boundaries certainly does not have it easy.

However, school teachers even though they venture into the public sphere for their jobs, do redeem their status as ‘good’ women. It is particularly so because, school teaching is seen at par to nurturing and caring for children, which are perceived to be the manifestation of ‘womanly’ qualities. Female teachers are thus exploited with a pay that cannot be judged fair for the role they perform.

Public as well as private schools are not too different from each other in this case. More so, elite private schools, with their perpetual profit-making endeavours, are cashing on this new situation with the onset of COVID-19 pandemic. In any case, they have a crucial role in making education the luxury of a few. They stand as the base for widening inequalities of all kinds, among different strata of people.

With a pandemic engulfing all of us, female teachers are made to enter the uneven and uncertain terrain of online teaching, along with the myriad of wifely and motherly duties that they need to do every day at home. Many of them are using online platforms for teaching for the very first time. Some of them have never used Facebook or Google. Some are uncomfortable with the very idea of using a computer. Not to forget, teachers are placed in different locations – rural, urban, semi-urban, and others.

Access to technology is not uniform. The crisis is deepened more for these teachers. On the other hand, the digital divide is real. Many villages do not have electricity in the first place. Can we even think of online classes here? Again, if it is about distribution of educational opportunities in families and in the society at large, we know where women are placed.

Online technologies, if at all accessible and affordable, remain the domain of men, that too depends on their class. The men have to bear the burden of being the earning members or the potential income source. Phrases such as ‘Women do not need to know computers to cook and clean’ are usual. The rural and urban digital divide is an omnipresent reality in India as much as it is a matter of gender divide.

One of the women who sells vegetables near my house in Guwahati told me that they have only one phone for a family of five. That too is not a smart phone. And it is usually with her husband since he is the primary income source of the family. Their children have had no classes since the lockdown was announced.

It is not uncommon for women to give up education and jobs during times of crisis. The pandemic is such a case. As people are struggling to get food on their plates and losing jobs, education will remain luxury for only a few, mostly elite, upper-caste, heterosexual men.

In any case, education for girls is still about making them good enough for the marriage market in most of the cases. The job of a female teacher is only deemed good enough if it does not hinder the smooth functioning of the patriarchal family. Injecting online teaching as the new pedagogic method is only a marker of the already established profit-oriented, casteist and patriarchal system of Indian education.

For women, getting education and then a job have been their keys to liberation. It is only recently that women are allowed to access education and be employed. Not all of them have managed to do so. For instance, the lower castes and gender non-conforming people are still far away from such pathways.

Also read ‘As COVID-19 Cripples International Education, Universities Need to Think Out of the Box’

However, making compulsory the use of digital platforms without taking into account the various divisions of class, caste, religion, gender, and location that loom large in our society is similar to getting rid of the very purpose of what education is meant to do. The Indian education system has never been inclusive, nor has it been equal in terms of gendered access. Now it is getting even worse.

A feminist pedagogical approach definitely cannot applaud this shift of education from the physical classroom to the online platform. We should be aware that the digital divide is a gender divide. We must question the performance oriented market economy of education which believes in competition, instead of compassion, empathy or sharing.

Ever since the countrywide lockdown in India began on 24 March, we had been witnessing an unimaginable number of migrants walking back home thousands of kilometres from large cities like Delhi and Mumbai. Some of them perished on the way. Food and shelter were their most valued dreams. Most of them have never been to school. Can we really preach the ‘benefits’ of online education in such a scenario? Wouldn’t that be sadist on our part?

Recently, a 15 year old boy died by suicide in Assam’s Chirang District, Assam, as he could not manage to access a smartphone for his online classes. The Baghjan oil well fire tragedy occurred just a few weeks back. There has been loss of life, land and livelihood. Floods have become yearly ‘rituals’ in the state.

Much before online classes were introduced as the ‘need of the hour’ by educational institutes and particular schools, the education scenario for residents of places like Chirang and Baghjan have been quite grim. Residents of such areas belonging to lower socio-economic strata have found it hard to access quality education even during ‘normal’ times.

Houses as well as schools get flooded. Some venture schools are made into relief camps. People are forced to flee for safer grounds and made to survive without food and drinkable water for days. On the other hand, many students including female students try to balance out their duties towards the household along with their school studies. Some have to spend a large amount of time working on the fields. Agriculture is still the lifeline for many residing in rural and semi rural areas in Assam.

In such circumstances, books, electricity, and education broadly are comforts only few enjoy. Depression, anxiety, suicides are outcomes of the state’s lopsided education policy. The ongoing pandemic that is forcing students to learn via online classes and smart phones is like scratching raw wounds of the ones on the receiving end.

It would be a respite to witness organisations such as the All Assam Students Union (AASU) taking a more proactive role in addressing this bleak situation, concerning particularly the underprivileged students of Assam. The state government needs to ponder much more on its idea of ‘development’.

The rest of us might as well stay away from making a Dalgona coffee of the unequal, uneven, anti-feminist education system.

Pooja Kalita is a PhD scholar with the the department of Sociology, South Asian University, New Delhi. Her key research interests include feminism in South Asia, material culture, and sociology of food.