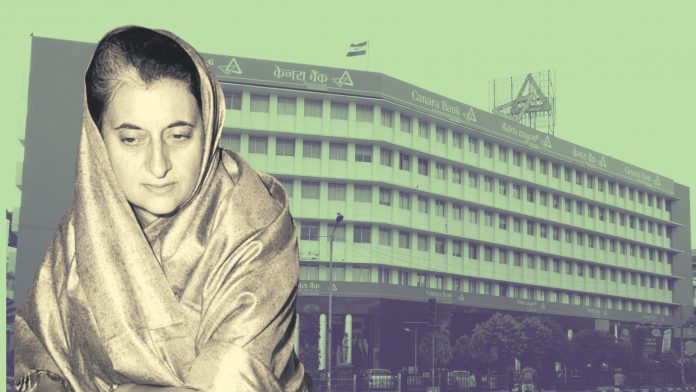 19 July 2020 marked the 51st anniversary of the Banking Companies (Acquisition and Transfer of Undertakings) Ordinance, 1969. Simply termed the Banking Nationalisation Ordinance of 1969, it announced the taking of ownership and control by the State of 14 commercial banks. These banks en masse constituted about 75% of the total banking sector in India at that time.

As one of the most closely-guarded secret moves, the decision taken by the Indira Gandhi-led Congress government was completely unanticipated and was moved ostensibly in pursuance of socialism and rural development. Ruminating over the potential consequent losses, corruption and redtapism, the decision was vehemently opposed by the rival political parties, like Swatantra Party and Jan Sangh.

The matter was also taken to the Supreme Court by Rustom Cavesjee Cooper through a prominent lawyer, ‘the courtroom genius’, Nani Palkhivala who filed the petition in the Apex Court on the very next day. This led to an interim order by the Supreme Court restraining the Government from removing the Chairman of all the banks that had been nationalised.

Meanwhile, on 8 August 1969, the concerned ordinance was replaced by Banking Nationalisation Ordinance of 1969. The director of Central Bank of India and a shareholder of Bank of Baroda and Bank of India, R.C. Cooper, alleged the Act to be violative of his fundamental rights articulated in Articles 14, 19 (1)(f) and 31(2) of the Indian Constitution.

Ergo, Palkhivala challenged the constitutionality of the legislation. He argued that the compensation payable under Schedule II of the Act to the erstwhile shareholders of the nationalised banks was grossly inadequate and thus violative of Article 31 of the Constitution.

The honourable Supreme Court in its judgment, delivered in R.C. Cooper v. Union of India on 10 February 1970 upheld the power of Government to nationalise any industry, including banks. However, Palkhivala’s argument on violation of Articles 14, 19(1)(f) and 31 were accepted. Therefore, the Banking Nationalisation Ordinance failed the scrutiny of constitutionality and was declared to be invalid. This led to a fresh legislation providing for the nationalisation of banks.

An Unnecessary Use of Power?

In a democracy, where people are believed to possess the ultimate power, it becomes well-nigh mandatory that all legislative decisions are taken by the representatives directly chosen by people, for the legislations are ordained to directly affect their lives and livelihood.

Although our constitution confers legislative powers upon the President too, there are conditions attached to the exercise of this power. Article 123 of the Constitution unequivocally asserts that the President should resort to the promulgation of ordinance only if and when both the Houses of Parliament are not in session and there exist some exigencies that force the President to take immediate action.

Looking back at the time when the Banking Nationalisation Ordinance was promulgated by the then Acting President V.V Giri, India was knee-deep in multiple whammies, including two international wars, one with China in 1962 and another with Pakistan in 1965, and two consecutive years of drought. There was no urgency per se on the night of 19 July 1969 to promulgate an ordinance and that too, when the Parliament was supposed to hold a session just two days later.

Moreover, the ordinance was drafted secretly and in haste by S.K. Maitra, in consultation with P.N. Haskar, L.K. Jha and I.G. Patel. Also, the ordinance, when presented before the cabinet on 18 July, was approved without any discussion and deliberation. The amalgamation of all these factors set the democratic and constitutional norms at naught and indicates unnecessary and excessive use of power.

Although, it may be in the limits of the government to nationalise banks or any industry as upheld by the Supreme Court in R.C. Cooper v. Union of India, it does not possess any power to deviate from the constitutionally-established requirements and processes.

The decision to nationalise banks, in itself, was not a subterfuge. The erasure or emendation of some of its provisions have indeed made it a good decision and has also been able to yield some calculated favorable results.

Earlier in the pre-nationalisation era, when private individuals or organisations used to rule the roost, banks were extending credit to large-scale industries that were usually owned and controlled by the large industrial houses. On the other hand, the government priority sectors, such as agriculture and small-scale industries, were put on the back burner.

But in the post-nationalization era, the narrative took a U-turn. The gross bank credit extended to the priority sector surged from 14% in July 1969 to 30.3% in July 1979.

Gross domestic savings as a part of national income also doubled in the 1970s. While working for the economic advancement of rural areas and the people residing therein, this decision also attempted to push rural people upward on the social ladder and bring them at par to their urban counterparts.

At the same time, it is asserted that nationalisation of banks was done to cut the tranche of credit available to big businesses, which were believed to support the rivals of Indira Gandhi. Also, the system of credit extension became enigmatic because there were different interest rates for different loans. The Reserve Bank of India (RBI) was overburdened with work, because it had to manage hundreds of interest rates while performing other tasks.

This was later done away by 1991 when the central bank decided to assess a pivotal repo rate while the lending rates were left to be decided by the commercial banks themselves.

It is almost ways time that shapes the ramifications of a particular decision. At the initial stage of decision-making, careful calibration and adherence to due process are crucial. This was the aspect that the Congress government failed to take into consideration in 1969.

Analysis of the process through which the Bank Nationalisation Ordinance was pushed forward tells us that the move, while being in utter disregard of constitutional, parliamentarian and democratic norms, was also more politically-motivated than growth-oriented. These estimates got corroboration when the Indira Gandhi-led government decided to appoint A.N. Ray, who was the sole dissenting judge in R.C. Cooper Case, as Chief Justice of India, setting aside the seniority of three judges.

In the short run, we may forget about the defenestration of due process while reaching a decision if it yields favourable consequences. But in the long run, this may serve as the justification for some fresh deviations. The demonetisation of 500 and 1000 rupee notes by Prime Minister Narendra Modi on four years ago is a perfect example of such a situation, in which a process nearly similar to that of bank nationalisation was adopted to execute a hare-brained decision.

Such precipitous and rash arrival at decisions is venomous to democracy and has the potential to impinge on the lives of people directly. It is time that some steps are taken in this direction to obviate such challenges, whether by adding more restricting provisions in the Constitution or providing some enabling powers to the judiciary.

Tanya Singla and Achintaya Soni are students of law at the University of Legal Studies, Panjab University.