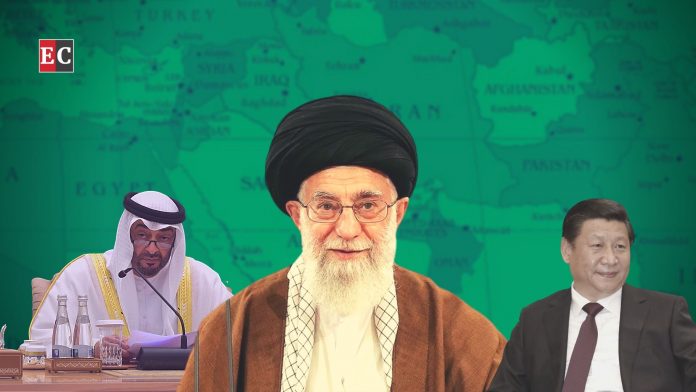 In the past few weeks, all eyes have been on the China-Iran 25 year agreement, which according to sources, is in the final stages of negotiation. It is aimed at not just strengthening economic links between Tehran and Beijing, but according to strategic analysts, also give a major boost to China’s Belt and Road Initiative (BRI) and bolster Beijing-Tehran-Moscow cooperation.

Iran is also seeking a 20 year deal with Russia, signed in 2001, that is focused on strengthening economic linkages, bilateral arms sales and nuclear cooperation.

Notably, the agreement between Tehran and Beijing includes a USD 280 billion Chinese investment package for the Iranian energy sector and USD 120 billion in Iran’s infrastructure sector. The key provisions of the deal – which will see China expanding its presence in not just Iran’s energy and infrastructure sector, but also banking and telecommunications – seem to have been finalised during the Iranian foreign minister’s visit to China in August 2019.

Important transport projects, which China will be investing in according to the agreement, include a 2,300-kilometre road, which will connect the Iranian capital of Tehran with Urumqi in China’s Xinjiang province. The aim of this project is to ultimately link up with the Urumqi-Gwadar highway, an important component of the China Pakistan Economic Corridor (CPEC).

Apart from the above project, China will also be given access to the strategic Jask Port – a major port outside the Strait of Hormuz.

The agreement also has critical strategic components. Both sides will deepen military cooperation through joint training and exercises, joint research and weapons development, and intelligence sharing. Both are also working on a bilateral arms deal.

Apart from the China-Iran agreement, another development, which is important specifically in the context of the Gulf, are the attempts being made by the United Arab Emirates (UAE) to improve ties with Iran. In recent years, ties had deteriorated after US withdrew from the Iran nuclear deal (or JCPOA).

“We agreed to continue dialog on theme of hope—especially as region faces tough challenges, and tougher choices ahead.”

Efforts to improve ties since 2019

Efforts to improve ties between Iran and UAE have been on since 2019. After the attack on Saudi oil tankers, Abu Dhabi refrained from directly blaming Tehran. Moreover, the COVID-19 pandemic has aided the betterment of ties between both countries. UAE was one of the countries that took a lead in providing medical assistance to Iran, sending aid on more than four occasions.

Interestingly, trade between UAE and Iran has risen in recent months. According to estimates, Iran’s exports to UAE were a little less than 1 billion USD (967 Million USD). This represents an increase of 8% in value.

UAE-Iran ties are important for a number of reasons.

First, given the economic challenges that both countries are facing, bilateral cooperation is crucial. UAE has already benefitted from close economic ties with Iran. In 2018, bilateral trade between UAE and Iran was estimated at 19 billion USD.

Also read ‘COVID-19: Iran is Feeling the Heat of US Sanctions’

Second, better ties between both countries will help reduce the flux in the Middle East. Moreover, through better ties with UAE, Iran may be able to improve ties with other Gulf Cooperation Council (GCC) countries.

Third, in recent years, India has cultivated close ties with GCC countries, while relations with Iran have gone downhill. New Delhi has, thus, faced a challenge of balancing ties between GCC and Iran. Since 2019, New Delhi’s ties with Tehran have gone downhill after the former stopped purchasing oil from the latter (US removed the waivers it had provided from sanctions).

Simultaneously, New Delhi’s ties with GCC countries, especially Saudi Arabia and UAE, have improved. But, Iran is important for New Delhi and the Chabahar Port is India’s gateway to Afghanistan and Central Asia.

The Donald Trump administration’s intransigence and its imposition of sanctions on Iran have had adverse impacts on the country’s economy. US allies like Germany, France, UK, Japan and India have differed with Trump’s approach towards Iran.

It is important for Washington to be more flexible. Further, a change of administration in Washington DC may result in a more pragmatic stance towards Tehran. For instance, Democrat Presidential Candidate, Joe Biden, has given indications that he is willing to rejoin the Iran nuclear deal.

Until there is a genuine change in the US’ mindset, it is important for Tehran to continue to engage with American allies who can urge Washington to adopt a more pragmatic stance vis-à-vis Tehran.

In conclusion, a possible thaw between Iran and UAE will have important economic and geopolitical ramifications not just for the Middle East, but also globally. Apart from boosting economies of both countries, it will also mean that countries like India that share close ties with both do not need to walk a tight rope and are not bogged down in trying to play a balancing act.