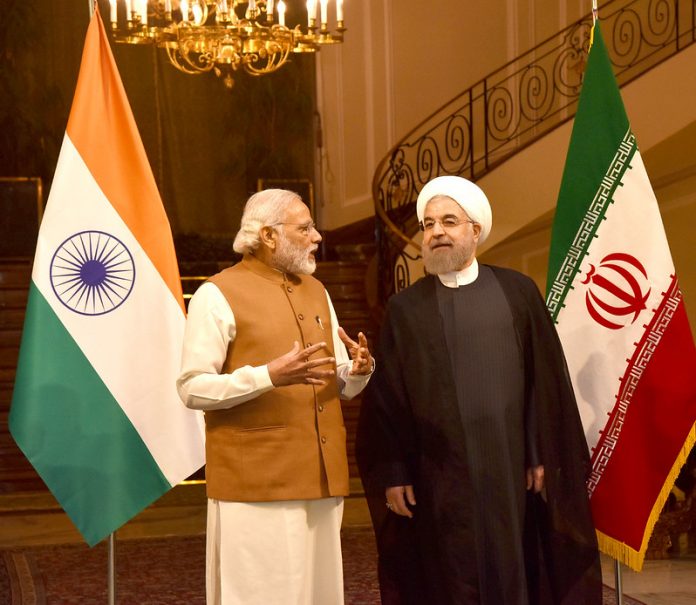 In the midst of the COVID-19 pandemic, stiff relations with neighbouring countries, and a floundering economy, India faces a new foreign policy challenge. Last month, Iran dropped India from a proposed rail link project between the Chabahar port and Zahedan along the Afghan border. Tehran has decided to carry on with the project alone, citing funding delays from New Delhi.

While the exclusion comes as a shock, deteriorating ties between India and Iran in recent times are a proof that the rail project fiasco is not a solitary, independent event. It can be attributed to several intrinsic factors, including an ubiquitous US that has exercised considerable influence over India in terms of its dealings with Iran and the Chinese alliance that Iran is now actively advocating.

The Indian subcontinent and Persian Gulf share a unique relationship that goes beyond conventional diplomacy. They show evidence from the past of sustained people-to-people relations, owing to a similarity in language and culture, besides strong commercial, cultural, and energy links after the establishment of formal diplomatic ties in 1950.

Prime Minister Narendra Modi’s visit to Iran in 2016, during which 12 MOUs were signed, further cemented relations between the two countries. A trilateral agreement on Transit and Transport was also signed in 2018 between India, Iran, and Afghanistan. The agreement with Afghanistan will not only facilitate transit of goods to India via the Iran-Afghanistan road link, but also render Pakistan’s attempts to block or restrict transit through Pakistani territory void2. This makes the Chabahar project important.

As one of the only eight countries who has been given a waiver by the US to buy Iranian oil, India is not only one of the top buyers of Iranian oil, but has also established firm geostrategic ties with Tehran in developing the Chabahar Port, close to Farzad oil fields. The port gives New Delhi direct access to Central Asia, depending on Afghanistan’s stability. The US waiver works in India’s favour because it can monetarily benefit from the transactions while also monitoring China’s movement.

After several appeals and threats to India, Iran said it would go ahead with the construction of the Chabahar-Zahedan rail link on its own, with approximately USD 400 million from the National Development Fund of Islamic Republic of Iran.

A major worry that has emerged for India, despite the strategic benefits that it gains from participating in the Chabahar project, are the sanctions applied by the US. The American sanctions on Iran over its nuclear project have long acted as a deterrent for many countries from establishing permanent commercial or diplomatic ties with Tehran.

It is not surprising that while India continued to negotiate for Chabahar, it could go ahead with the project only when Washington DC lifted the sanctions. In 2018, when US President Donald Trump pulled out of the Joint Comprehensive Plan of Action (JCPOA) to re-impose stringent sanctions on Iran, India’s energy imports from Iran were immediately affected.

While the Chabahar Project is said to be given special waiver, the imposed sanctions make it difficult for companies to commit to the project, notwithstanding the already existing pressure to not rub the US the wrong way. New Delhi’s has found it increasingly difficult to find a partner company to aid the Chabahar project as investors and port managers. The companies fear that engagement in the project could potentially irk the US.

At a time when India-Iran relations are taut with tension, the entry of China into the picture is no good news for New Delhi either. Weak or unsure India-US coordination has left the Indian Ocean Region open for Chinese influence. India’s interest in the Chabahar, being pivotal as a lucrative regional shipping hub opening to the Indian Ocean, was beyond simple economics. The port’s location, just 90 kilometres away from the Gwadar Port, a strategic point in the ambitious Belt Road Initiative (BRI) between Pakistan and China, would help New Delhi keep a tab on both Pakistan and China.

However, with China’s involvement in Gwadar, India cannot wield its unique advantage. China, which already has an economic and security partnership deal with Iran, has now made an investment worth USD 400 billion into Iranian economy for the next 25 years. The investment is to be divided – USD 280 million will be funnelled into oil and gas sector and the remaining USD 120 million into core sectors, including banking and telecommunication. In return, China will get a steady supply of Iranian oil at a heavy discount for the next 25 years.

This deal serves both countries particularly well wanting to change the global US-centric narrative, since Iran, reeling from heavy sanctions, earns some economic respite while giving China an opportunity to extend its influence in the Middle East, gaining strategic help from Iran’s military bases and hydrocarbon reserves (an asset which would help China immensely in its quest for regional and eventual global hegemony).

These will contribute to Beijing’s growing prowess in the Indian Ocean Region, something that would both explicitly and implicitly hurt India’s interests in economic and geostrategic terms, especially at a time when India and China are struggling to meet a common diplomatic ground and are openly hostile, case-in-point the recent bloody standoff in the Galwan Valley.

At a time when commercial exchange between India and Iran is facing headwinds, Indian export of Basmati rice and tea to Iran faces uncertainty, as the Central Bank of Iran has restricted its allocation of currency to those traders buying it out of fears of payment deference, thus delaying any fresh contracts.

Further, India, which depends upon fuel imports, could face inflationary pricing or a temporary embargo, as the pipelines from Central Asia to India via Afghanistan are yet to materialise. While India is likely to make both financial and strategic loses, especially in the highly-contested Indian Ocean Region, giving China an edge, the construction of Chabahar would still be beneficial for India as it can establish a stable transit route to and from Central Asia.

Tanistha Bhagawati is currently in her final year of undergraduate study in Political Science from the Department of International Relations, Jadavpur University.