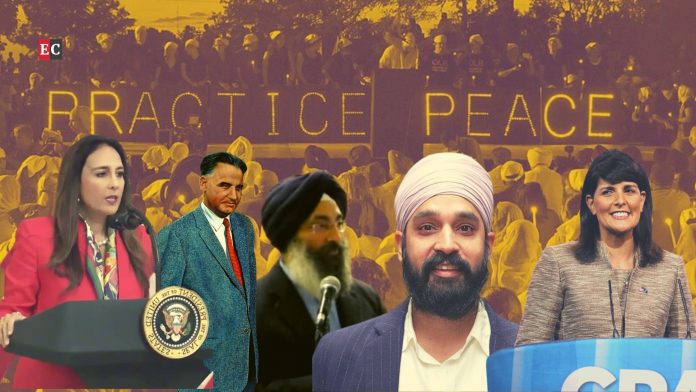 Presumptive Democratic Party nominee for the upcoming US elections, Joe Biden, in a tweet on 6 August paid homage to Sikh worshippers, who while praying at a Gurudwara (Sikh temple) in Oak Creek, Wisconsin, eight years ago, were killed by a white supremacist.

Back then, Biden was the Vice President in the administration of President Barak Obama. He also said that the best way to honour the memory of the worshippers would be to resolutely fight against bigotry of all forms, and reduce gun violence.

The attack on a Sikh Gurudwara in 2012 had drawn strong response from President Obama who had called for ‘soul searching’ on gun violence. Then Indian Prime Minister, Dr Manmohan Singh, had also condemned the attack.

A critical moment in time

Biden’s tweet is important for a number of reasons.

First, it comes at a time, when the anti-racism #BlackLivesMatter protests are in the news, and drawing global attention. Second, days after his tweet, a shooting took place in Washington DC, in which a 17 year old was killed while 20 were injured. Third, it concerns a minority community that is not very large in number, but has succeeded in different walks of life.

Finally, it comes days before he chose Kamala Devi Harris, of half Indian origin, as his running mate for Vice President. In 2011, Harris had allegedly defended a discriminatory policy against Sikhs, which prevented state prison guards from keeping beards for religious reasons, even though exceptions were given for medical reasons.

While Harris has taken a firm stance on Civil Rights issues, a number of Sikh groups had demanded an apology in June 2019 when she was in the Democratic race for becoming the Presidential candidate (she bowed out of the race in December 2019). Even her record on police reforms has been questioned.

Sikhs in the US and Hate Crimes

Sikhs, whose total population in the US according to estimates is near 1 million have faced numerous hate crimes in the aftermath of 9/11. Yet, Sikh advocacy groups, in different ways, have done a stellar job in enhancing awareness about Sikh identity in the US over the past two decades.

Notably, rather than taking a stance of distinguishing themselves from Muslims, Sikhs have focused on educating Americans about themselves. In an article written for Religion News Service, Simran Jeet Singh a Sikh Academic, activist and commentator on race related issues, articulates this point:

‘The problem with this response is that it just deflects the hate onto another community. That’s not right, nor is it fair. Nor is it Sikhism. My faith teaches me to engage in authentic solidarity, to see others’ oppression as our own. It’s just not an option to throw another community under the bus — even if it might make our lives easier or safer.”

Sikh individuals and organisations have been proactive and expressed solidarity with the broader community. The most recent example is the COVID-19 pandemic, during which Sikh Gurudwaras served ‘langars’ (community kitchen food) to different communities, and also delivered pizzas to doctors who have been working around the clock.

Only last year, when Sandeep Singh Dhaliwal, a Senior Police official from Texas was shot dead, officials from not just Texas, but also the State Department offered its condolences. The US Congress also passed a resolution against the crime. Dhaliwal was the first turbaned Sikh police official in the country.

The 550th birth anniversary of the founder of the Sikh faith, Guru Nanak, in November 2019, was commemorated in different parts of the world. In the US, a resolution introduced by Republican Senator from Indiana, Todd Young, and Democratic Senator from Maryland, Ben Cardin, was passed in the Congress.

This recognised the increasing importance of Guru Nanak’s emphasis on inclusiveness and humanitarian values, and the fact that Sikhs in the US and other parts of the world strive to move along the path shown by their first Guru.

”A holistic understanding of peace, supported by the ideas of equality and fraternity, is an integral part of the Sikh tradition, a movement that strives to conquer communal hatred and division by following the sacred teachings of Guru Nanak and his tenets of honest work, charity and reverence to God.”

What is important is that all these resolutions recognised the distinct identity of the Sikh faith.

Sikhs in US politics

While the Sikh community, after 9/11, has had to put in a lot of effort towards increasing awareness with regard to the faith, the first Asian American to enter the House of Representatives was a clean shaven Sikh, Dalip Singh Saund, in 1957 . Asian American policymakers in the US, have been batting to include Saund in California’s Hall of Fame

Since then, Sikhs have risen to other positions, but none have made it to the US Senate or House of Representatives. Nikki Haley, born to Sikh parents, was the Governor of South Carolina and US Ambassador to the UN.

Further, Gurbir Singh Grewal was elected as Attorney General of New Jersey in 2018, while Ravinder Singh Bhalla was elected as Mayor of Hoboken, New Jersey. Bhalla was the candidate of the Democratic Party. In fact, Sikhs have been actively involved with both Republicans and Democrats.

The question on many people’s minds is which way will the community vote in the upcoming election.

In terms of voting, Sikhs are not really a monolith – though like other immigrants, there has been a tilt towards Democrats. Voting is driven by a number of factors, including age group, economic status and state.

One also has to have an understanding of the trends of migration. Sikhs in California have been there since the late 19th and early 20th centuries. In the 1950s and 1960s, a lot of professionals migrated to the US East Coast and Midwest. In the 1980s and 1990s, during the phase of militancy in Panjab, a significant number of Sikhs from the Majha region (Gurdaspur-Amritsar border belt) migrated to different parts of the US, with a large number taking political asylum to escape rising police atrocities.

Some Sikhs from outside Panjab also migrated in the aftermath of the Anti-Sikh massacres in 1984. The IT boom has also driven migration of Sikhs from India, though not of the same degree as from South India.

Just as it is tough to judge the political preference of the Sikh community in the US, there is no one issue as such.  Sikhs in the US have to straddle numerous identities; their American identity, Sikh faith, Indian origins and issues pertaining to South Asia – not to forget issues of race

While the State Department has expressed its concerns to the Afghan government regarding the security of Afghan Hindus and Sikhs, Biden had stated last May that he would grant asylum to Afghan Sikhs and Hindus, keen to shift from Afghanistan, if voted to power. He said:

“If I am elected president, my administration will renew our commitment to refugees” which includes raising “the annual global refugee admissions cap to 125,000″

The former Vice President had also urged the State Department to consider the request for ‘emergency refugee protection’ to the Afghan minority communities. India has approved the entry of 700 Afghan Hindus and Sikhs for shelter, with some of them already having arrived.

The well-coordinated efforts and structured lobbying of a number of Sikh organisations in the US has resulted in US policy makers flagging this issue.

For those Sikhs who strongly identify with India, even after giving up their citizenship, the broader US-India relationship – economic and strategic – would be an important factor.

For others, especially those who are activists or academics, human rights concerns and minority issues in India are important, and the stand of both parties would be important. Importance given to India by Sikhs settled in the US would depend not so much on professional or economic status, but the phase of migration and links maintained with India through business, travel and family settled there.

Notably, over the past two decades there has been a continuity in US policy towards India, and the Democrats and Republicans want to improve ties with India. In recent years apart from certain individuals, neither side has been particularly vocal in raising issues related to rising majoritarianism and human rights violations, lest they be perceived as Anti-India.

The Joe Biden campaign has criticised the Citizenship Amendment Act (CAA) and NRC and has called for restoration of the rights of the Kashmiris, much to the chagrin of the right in India. Harris (who is half Indian) has also remarked that religious tolerance, diversity and human rights are important components of the Indo-US bilateral relationship.

It is worth noting that Sikh activists like Simran Jeet Singh extending support to the #BlackLivesMatter movement.  Another prominent Sikh activist and researcher, and a co-founder of the Sikh Research Institute, Harinder Singh, has repeatedly spoken about the need for expressing solidarity with other minority groups in the US and to build partnerships with vulnerable communities.

In spite of there not being much of a difference between Democrats and Republicans on crucial issues, like all other immigrants and minorities, a large percentage of Sikh voters in the US, are likely to go for the Democratic Party for two reasons – first, increasing racism under Trump which have resulted in hate crimes against the community and Biden’s favourable statements on Sikh related-issues, would have been watched by the community.

Commenting on Kamala Harris’ patchy record in the past on minority-related issues, Harinder Singh, tweeted:

In conclusion, while it may be some time, for a turbaned Sikh to become a Congressperson or Senator – though a number of glass ceilings have been broken by South Asians in general and Sikhs in particular in recent years – the community has been able to increase awareness about its identity, not just through awareness campaigns and economic successes, but also by standing firmly with other minority groups.

By not totally attaching themselves to the bandwagon of any one party, and extending solidarity vis-à-vis other minority groups and those facing oppression, they have only helped in increasing awareness about their own faith and also adhered to the basic principles of their faith – emphasis on egalitarianism, and standing up for the oppressed.