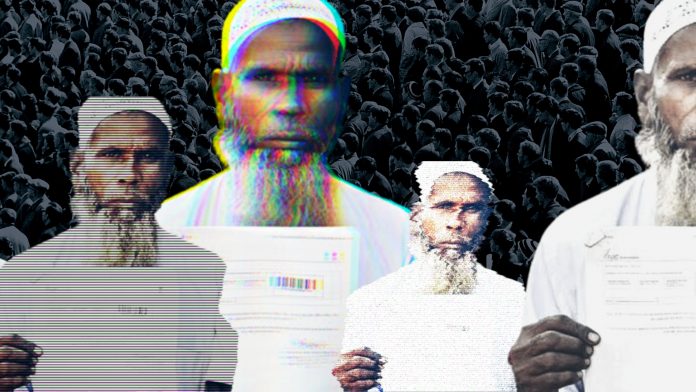 Exactly one year ago, on this day, authorities in Assam released the final list of the National Register of Citizens (NRC), which left out 1.9 million (19 lakh) people, effectively rendering them stateless and pushing them towards a state of limbo. One year later, the list remains unnotified by the Registrar General of India and those left out are yet to receive the official rejection slips.

But even when the COVID-19 pandemic started and Assam was torn apart by a devastating flood, the talk of sending out NRC rejection slips did not die out. In fact, the list remained very much a part of Assam’s sociopolitical lifeworld.

Critiquing the NRC and writing against the politics of ‘blood and soil’ can be a very complex experience. My experience with it over the past two years has been of schizophrenic proportions. The schizophrenia is a result of threats in private and public space from multiple quarters of Assam, but not just. My solitary encounter taught me a lot about the nature of political society in Assam and the location of class and caste politics in the state.

The specter of chauvinistic mobs in Assam is nourished by the same brand of anti-migrant hate politics that is observed across the world. You might ask how is it that such a commonplace hate harbored by a few in Assam managed to pull off something like NRC. It is no less than remarkable, isn’t it?

There are many explanations to how the list-making project was made possible and how it became the graveyard of Indian citizenship. One way was to make the enemy and the figure of the ‘outsider’ a very intimate one. A sustained and perpetual disdain for the outsider transformed the hate into a desirable political emotion when it came to the question of the ‘Bangladeshi’ in Assam. In many ways, it objectified the outsider.

Now, objectification certainly carries with it shades of hate, but no objectification is complete and successful until you instill fear in the object you hate. If the subject of objectification, here the ‘Bangladeshi from the positionality of the chauvinistic Assamese’, experiences fear or fears to practice their culture and speak their tongue, the subject undergoes a radical experience of fear.

When fear as a political emotion becomes an everyday experience, the objectification of a group of people is achieved. The ‘outsider’ discourse in Assam is pregnant with such objectification, which is also accompanied by fear.

The politics of fear, coercion, subjugation and domination are essentially the language of the ruling classes. The caste Assamese middle class that forms this ruling class in Assam has successfully instilled fear and maintained coercion and domination on the social margins in Assam. The ‘Bangladeshi’ are their worst class enemy, for the politics of seeking to assimilate the Bangladeshi was an unsuccessful project of the same class.

The project of NRC is a way to accommodate that failure of the ruling class, which finds its early roots in events that lead to the Assam Agitation (1979-85).

Language is, of course, pulled back to culture and people who practice the same. The NRC and the Clause 6 of the Assam Accord give oxygen to the imagined linguistic suffocation that the ruling class feels.

The historical events that were ploughed to make the NRC possible have been violent, chauvinistic and xenophobic in nature. The various deaths, immeasurable trauma and apathy of contiguous communities that became visible for us with the NRC process are a manifestation of that history and hate psychology harbored by the people in Assam.

The NRC ought to be treated not only as antithetical to the ethics and morals of citizenship in India. It is a process, which makes a mockery of one’s existence, one’s ‘species-being’ as Karl Marx would call.

The NRC is the new political delight in Assam. It is the new religion that gives legitimacy to Assamese nationalism. This sacredness created, thus, makes any critique or opposition to the NRC an immoral, and blasphemous act in the eyes of the ruling class in Assam. The intellectual class and their head shakers have joined in their praise of NRC or in making that sacredness possible.

In many ways, Thomas Robert Malthus’s prophecy of overpopulation finds a new life in the NRC. Malthus, in his Essay on the Principle of Population as it Affects the Future Improvement of Society, stated that the growth of population would outrun the food supply.

His view on ‘overpopulation’ was at best an oxymoron to his times. It was an ‘oxymoron’, notes sociologist Zygmaunt Bauman, with a striking fact that although the last version of Malthus’s essay was published in 1798, the word overpopulation entered the Oxford English Dictionary only in 1870.

The justification provided for the NRC in terms of scarcity finds a resonance with Malthus’s prophecy of ‘principle of population’, where the overpopulated are devalued, reduced to insects and waste to be discarded and stripple off from political rights. Those justifications are written in most bureaucratic documents that have been written on Assam, be it the Census or the Brahma Committee report.

With an year gone by, the spectre of the NRC continues to haunt its victims. Their schizophrenia is unimaginable and immeasurable. Just imagine being in their position where a virus, flood and the state grip you all at once, amidst a motivated chauvinistic crowd and citizenship in doubt.

Can there be a more degraded ‘bare life’ than this? I highly doubt it.