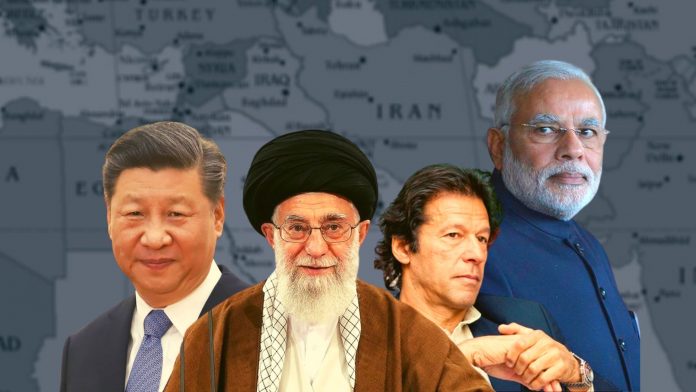 One of the other important developments that is likely to have a significant impact on South Asia’s geopolitical and economic dynamics is the Iran-China 25 Year Plan, which will impact not just bilateral relations, but geopolitical, economic and security dynamics in South Asia.

One, Pakistan’s ties with Iran are likely to strengthen, and Islamabad is likely to pitch its bandwagon firmly with Beijing and Tehran. Second, China’s clout in Afghanistan is likely to rise as a result of the agreement, not just in terms of economic, but also strategic influence.

India-Iran ties and the Chabahar Project

India too has begun to pay closer attention to Iran after the agreement, especially after it gave signals that it could be elbowed out of the Chabahar-Zahedan rail line project – an important component of the Chabahar Port project.

A clear reiteration of this point are the recent visits by Indian Defence Minister, Rajnath Singh, and Foreign Minister, S Jaishankar, to Tehran. Both Indian ministers met with senior Iranian officials, and discussed issues pertaining to bilateral cooperation, with an emphasis on the progress of the Chabahar project, and regional security.

It would be pertinent to point out that Tehran has expressed its frustration with India with regard to funding, as well as the slow progress of the Chabahar project. Bilateral relations witnessed a downhill slope after India stopped purchasing Iranian oil in May 2019, in the wake of the US removing a temporary sanctions waiver for New Delhi.

Iran had also criticised India’s the Citizenship Amendment Act (CAA) and made strong statements against the Delhi riots in February 2020, expressing concern with regard to the safety of Muslims in India. Iranian Foreign Minister, Javad Zarif, had said:

Recent visits by top officials are an indicator that New Delhi is keen to ensure that the Chabahar Project remains on track, and that on Afghanistan, Tehran does not toe Beijing’s line.

Another important consideration is possible change of guard in Washington DC. It is likely that Joe Biden, if he comes to power, will not follow President Donald Trump’s approach on Iran. He is expected to be open to engagement with Tehran, which will in turn provide India space to pursue economic links with Iran.

While India has been seeking to amend ties with Iran, with an eye on its vision for regional connectivity, Pakistan has recently agreed to become part of the Quadrilateral Traffic in Transit Agreement (QTTA), which will enable it to circumvent Afghanistan. The Karakorum Highway will be Pakistan’s gateway to Central Asia. It connects Gilgit-Baltistan to China’s Xinjiang region, which further links with Central Asian countries.

One of the reasons cited by Pakistan, for going ahead with the QTTA is that Kabul has been reluctant to provide access to Pakistani products to reach Central Asia. Afghanistan has put a pre-condition that it would only allow the same if Pakistan allowed land access for Indian goods to reach Afghanistan.

During the recent visit of Uzbekistan’s Deputy Prime Minister, Sardor Umur Zakov, to Pakistan, he met with Prime Minister Imran Khan and other senior officials. Possible ways of bolstering bilateral economic ties and connectivity were explored, and issues pertaining to regional security were discussed.

Connectivity and trade are important, and for very long, suggestions have been made by commentators for New Delhi and Islamabad to not just strengthen economic linkages, but also explore regional connectivity initiatives together.

The strained relationship between India and Pakistan has meant that such suggestions are nothing, but mere pipe dreams.

At the inauguration of the Kartarpur Religious Corridor in November 2019, Navjot Singh Sidhu, a former Indian cricketer and Congress legislator from Indian Punjab had also pitched for imaginative thinking, and to foster economic cooperation between the two Punjab’s.

“My dream is that a trader should start after having breakfast from Amritsar in the morning and come to Lahore and have biryani here, do his business and go back to Amritsar.”

In the immediate future, all countries have to look out for their economic interests, and connectivity is a key tool for the same. In the longer run, it would make sense for New Delhi and Islamabad to resume not just bilateral trade, but also to set aside differences and work towards examining synergies in the area of regional connectivity.

The ultimate aim should be a seamless India-Pakistan-Afghanistan-Iran connectivity regime. A zero-sum approach should not drive regional connectivity initiatives.