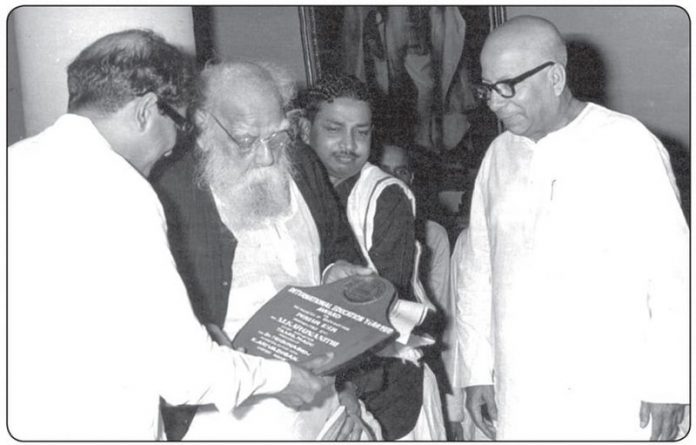 At a time when Hindutva overtones are met by equally vociferous Islamic secessionism, a critical study of Periyar and his rationalist movement is the need of the hour.

Periyar E V Ramaswamy was born to Venkata Naicker and Chinnathayamal on 17 September 1879 in a family that was affluent and deeply committed to religious customs and traditions. After a brief schooling period that lasted for six years, he joined his father in the family trade.

The rigid discipline of the family, its routine adherence to rituals and explicit pressure on him to conform to a similar way of life despaired him so much so that he fled home and led a nomadic life for a brief period in Varanasi.

Public offices and positions of respectability gravitated towards Periyar. His concerns for the common man and society were genuine and deeply abiding. When he joined the Congress in 1919, it was a significant change from a life of affluence, comfort and social respectability to one of hardship, struggle and suffering.

Events and experiences, however, made him believe that the then Congress leadership was not sufficiently determined to eradicate the caste system, end caste-based privileges, take effective steps to ensure social justice and bring about equalisation of opportunities.

Periyar’s departure from Congress and the formation of the ‘Self Respect Movement’ marked a decisive and momentous step in his life. From then on, his was a career of revolt, reform, iconoclasm and incessant struggle.

He intensified his demand for communal representation in education and employment. He rallied behind the non-Brahmins and organised the first provincial conference to articulate their claims. On this issue, he made common grounds with Justice Party and was drawn to it for the various progressive measures ushered in by the former.

He was elected the President of Justice Party even when he was in prison in 1939. The streak of rationalism was evident in him from his youth. Periyar said:

“I have not believed in any caste or practiced any religion since my youth. I might have put up my appearances of conformity where obligatory. Similarly, I have had neither the fear for nor the faith in God. I would not have desisted from doing something I wanted to do fearing God’s anger or divine punishment, similarly I would not have done anything against my will to please or receive favours from God. ”

In his long public life, Periyar might have made many adjustments, shown accommodation and reconciled with difference in policies for the sake of larger interests, but he never made any compromise on communal representation.

He was convinced beyond doubt that for the ignorant, there was no such thing as liberation. To them, freedom from one bondage would only mean submission to another. The ignorant would only try to change their masters and not shed them.

Periyar’s struggle for the cause of women has perhaps few parallels in the history of women’s liberation in India. He ridiculed, condemned and exposed child marriage, widowhood, dowry, male domination, the myths of Puranas that weave stories extolling servility in women as virtue were ridiculed, day in and day out, in public meetings, marriage ceremonies, political platform and writings.

He saw clearly that the continuous occupation of women in bearing and bringing up children was the main cause of their confinement to the home and complete dependence on men. He saw contraception as the most effective tool for women’s liberation and was the earliest to advocate family planning.

He introduced self-respect marriages, which stressed the equality of sexes, looked at family life as one of partnerships, and discarded all rituals that implied subjugation of women to men. It is but apt that the title of ‘Periyar’ was officially conferred on him at a women’s conference held in Madras in November 1938.

On Hindi, Gandhi and nationalism

Introduction of Hindi as a compulsory subject by C Rajagopalachar  in 1938 and Periyar’s historic agitation against the move paved the way for the emergence of the Dravidian Movement and laid the foundations of the “Dravidanadu” concept.

He threatened to launch a major struggle to burn the national flag to protest against the imposition of Hindi. However, he suspended the agitation in deference to an assurance from the then Chief Minister of Tamil Nadu, K Kamaraja, that Hindi will not be a compulsory subject in the state.

Periyar viewed nationalism as a brilliantly-designed deception that diverts attention of the masses from real issues and intoxicates the mind of gullible people with a false pride in an ancient civilisation.

Periyar was not only an “anti-national” in the popular parlance of today, but also an anti-Gandhian. At a time when Mahatma Gandhi was considered an incarnation of Lord Vishnu, he was critical of the Indian nationalist leader and his methods.

Periyar thought that the Gandhian discourse was adulterated with a god-related discourse, which led the masses into believing that he was the Prophet of the Indian people. He was puncturing the holy narratives of India’s destiny while Gandhi was very convinced of the same. Had he been alive, he would have been the leader of ‘anti-nationals’ of today.

The need to revive Periyarism

Periyar kept an open mind and was refreshingly resilient in accepting and absorbing changes. His relevance in current times has increased manifolds as the society that he dreamt of is under severe threat from a dangerous concoction of irrationality, hyper-nationalism, caste atrocities and anti-science attitude peddled by people in power ad those with vested interests.

The youth of today must once again revisit Periyar’s discourse and remain committed to rationality above all other temptations. He should no longer be compartmentalised in South India’s study circles and other niche Ambedkarite-Periyar study circles, but must become a pan-India phenomenon.

Never has been the time this ripe for India to study Periyar and his ideas, and adopt them in the national social and political milieu.

teaches at Delhi Public School, Dhaligaon, Assam. She is interested in geopolitics, and peace and conflict studies.