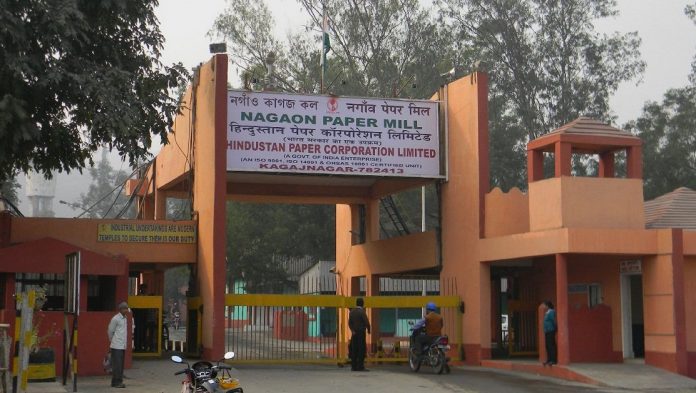 On 14 September, the National Company Law Tribunal (NCLT) in New Delhi adjourned a crucial hearing that was to seal the fate of two of Assam’s iconic paper production lines – the Nagaon Paper Mill (NPM) and Cachar Paper Mill (CPM). Both mills have been lying ideal since production stalled few years ago.

How did it come to this point? How did two profit-making, frontline paper mills collapse so rapidly?

It was only at the dawn of industrial revolution in Europe that the entire work process and livelihood of the people took a U-turn. It was a total deviation from the earlier times when the human civilisation relied heavily on a superficial belief system in each and every act of life.

Industrial revolution set the ground for people to develop in comprehensive ways by premising itself on rationalised thinking, alongside progression in science and technology. However, along with revolutionary rewards, some shortcomings too came along as byproducts of industrialisation.

One of such shortcoming is the sudden downfall of the economy which had the potential to destabilise the very structure of any organisation as well as the socioeconomic status of the people working under such organisations.

In Suicide: A Study in Sociology, French sociologist Émile Durkheim observed that suicide rates were higher where sudden economic breakdown occurred. He labeled this kind of suicide as ‘anomic.’

A similar situation resonates the plight of the employees of the two comatose paper mills in Assam. They too have been facing the jolt of a sudden economic collapse. Sudden changes in their lifestyle as a result of the collapse have a profound impact on their psychological well-being.

Even though both these paper mills are government entities, the government has not shown keen solidarity with the people. Instead, the government had been planning to go against the wishes of the employees by handing over the two mills to private firms.

Mills that made paper…and revenue

The Nagaon and Cachar paper mills have played the role of an industrial growth apparatus in the entire Northeastern region of India from the time of its operation.

Both were units of the Hindustan Paper Corporation Limited (HPCL), which was set up on 29 May 1970. HPCL is a leading Public Sector Unit (PSU) that comes under the administrative control of the Indian government’s Department of Heavy Industry (under the Ministry of Heavy Industries and Public Enterprises).

Significantly, NPM is the first paper mill in the world that produces Kraft Pulp with 100% bamboo as raw material. This paper mill once produced writing and printing papers that are mostly used by government offices and various organisations since 1985. Since then, the corporation had been able to produce paper at more than 100% capacity utilisation.

So it is clear that HPCL had contributed a large amount of revenue to the government of India. It had been paying dividends to the government since 2005-2006. The corporation had exported paper to neighboring countries, like Bangladesh, Indonesia, and Nepal till 2010.

But from 2012 onwards, the production capacity of both the mills came down due to various reasons, like less supply of raw materials and other allied resources, and mismanagement and corruption, which later led to shortage of working capital. Due to a shortage of working capital, production in CPM and NPM stalled in October 2015 and March 2017, respectively, and have remained so since then.

The trouble for production within these two mills started from 2008-09 while the cost of the inputs went up, and due to other logistical constraints. There are two reasons behind the slowdown of the production process in these two paper mills.

One key reason is the shortage of bamboo supply due to imposition of entry tax on bamboo and large-scale corruption by state forest officials. Illegal tax collection by police and unwarranted interference by forest department officials in the free movement of bamboo-laden trucks have choked productivity in the two mills.

With the nuisance increasing every day, many truckers have refused to ply their trucks, thus resulting in a short supply of bamboo. However, CPM faced the problem of bamboo shortage due to gregarious flowering of bamboo species named Muli Bamboo (Melocannabacciffera), which resulted in reduced availability of fibrous raw material.

In NPM, non-execution of fresh agreement for bamboo supply with the tribal council created a situation where bamboo traders took advantage by hiking the price. So in the case of NPM, it was mismanagement was the factor that led to escalation of production costs.

Another reason is the National Green Tribunal’s ban on mining and transportation of coal in Meghalaya that led to closure of CPM. Thus, irregularities in procuring bamboo, failure to lift coal from Coal India Limited, corruption of police and forest officials, mismanagement and negligence of high ranked officials culminated into reduced productivity in these two mills, ultimately creating a situation of bankruptcy.

A stinging crisis for employees

As reported in the print and electronic media, employees who worked in these mills and their family members have had to suffer the most due to non-payment of salaries for the last 45 months. They haven’t gotten a penny since the production lines became indolent.

Consequently, the family members of the employees had to suffer from various hurdles in their life. Many children of NPM employees had applied for free education in colleges under a scheme that is meant for BPL families. Many a time, they had to make compromises with their academic career due to unavailability of funds for higher education.

However, those schools which were established as a Corporate Social Responsibility (CSR) of the company and directly run by the funds of these two paper mills are in a position that they can shut down at any point of time. Due to unavailability of funds, teachers who were working in these two schools resigned one after the other due to non-payment of salaries.

To bear the liabilities of expenses of their families, some of the workers who once had drawn a handsome salary from NPM are now engaged in daily wage work in companies and other income generating sources. Overall, around 2 lakh people lost their jobs and are facing hardships due to the closure of the two mills.

Many of them suffered premature death, as they were not able to avail proper medical treatment due to lack of financial support. Reportedly, three employees even killed themselves, unable to bear the burden of financial distress.

Struggles for revival and government’s response

A joint committee of the two paper mills, along with student organisations and various trade union bodies, have on many occasions requested the central and state governments to revive these mills and pay the employee dues. However, the government hasn’t shown much interest or taken any concrete steps to meet the demands.

This sheer lack of empathy on the part of HPCL authorities and the Assam government has created much anguish amongst the jobless workers. Despite Prime Minister Narendra Modi giving assurances to the employees before the 2016 state assembly election, the Bharatiya Janata Party (BJP)-led government hasn’t taken any steps so far for the revival of these two mills.

Also read ‘Why Is It Difficult to Implement Minimum Wages Act in India?’

Now the fate of these two paper mills lies in the hands of the National Company Law Tribunal (NCLT), who is to decide whether the two paper mills are capable enough to operate again or they should be handed over to private enterprises through bidding.

Thus, once again, the NCLT’s adjournment of the final hearing on 14 September, compelled the helpless employees and organisations to make a plea before the state government to resolve the issue before the NCLT declares the mills bankrupt and hands them over to private entities through open auctions.

Recently, the Assam government sought one month’s time from the liquidator of HPCL to deal with the matter before NCLT so as to draw up a comprehensive plan to revive the two sinking paper mills.

If the state government fails to resuscitate these two paper mills once again, then it would turn out to be another depressing story in the industrial history of Assam where yet another set of PSU-run industrial units will go directly into the hands of private firms and eventually lose public confidence.

However, there are also allegations of the government’s conspiracy to shut down the mills to favour private paper-making firms. Questions are also being raised on the point that if the Kerala government could run a defunct unit of HPCL (not without hassles), then what is it that stops Dispur from doing the same.

However, this is not the only case in the context of Assam. The government has failed to recover sick industries in the past as well, for which the working classes had to pay a heavy price.

In the past, 17 PSUs and 2 manufacturing units of Assam had to put their shutters down due to the lack of a revival strategy on the part of the state government. A similar fate echoed among the employees of the Assam Co-operative Polyster Limited, where workers have not been receiving their salary due to its closure in December 2016.

Thus, the inability of the state government to revive these once-active industrial entities may project an unsettling picture to the front, which would run counter to the spirit of setting up industrial hubs in the region in the future. At a time when the Indian government is spending a large amount of money to lure investors into Northeast India under the ‘Act East Policy’, it is saddening to note that the present state government has no clear plan till date to revive the sick PSUs in Assam.

If not anything, this reveals a bleak picture of industrial progress in the state.

is an Assistant Professor at North Bank College, Lakhimpur (Assam). He is also a PhD scholar at the Tata Institute of Social Sciences (TISS), Guwahati, Assam.