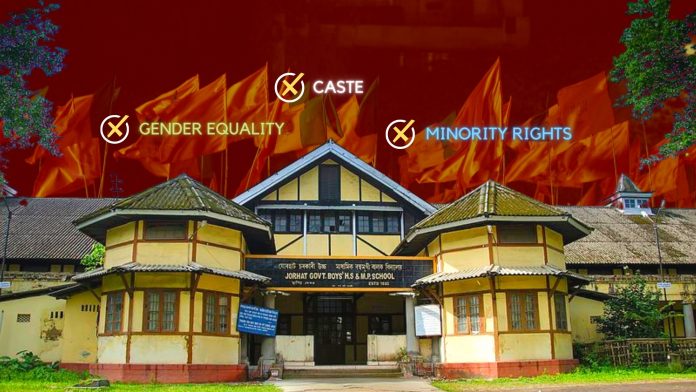 Recently, the Assam Higher Secondary Education Council (AHSEC), as part of its 30% syllabus reduction plan, deleted various chapters from its curriculum to lessen the load on students on account of the COVID-19 pandemic. According to the notice uploaded on the AHSEC website, the key aim of the curricular slash-down is to “reduce the exam stress.”

Amongst the several deletions across various subjects, are the chapters on caste, women’s equality, minority rights, Mughal history, Nehruvian state policies, Ayodhya dispute and the anti-Muslim Gujarat riots of 2002. Needless to say, this has raised many eyebrows.

While some historians have questioned the strategic removal of Mughal history from the syllabus, political scientists have refused to consider the removal of Nehruvian policies, Ayodhya dispute and the Gujarat riots as mere coincidence.

Those in power have routinely used educational institutes, which are understood as Ideological State Apparatus (ISA) by French Philosopher and Marxist scholar Louis Althusser, to maintain their hegemony over the masses. In recent times, particularly after the Hindu nationalist Bharatiya Janata Party (BJP) came to power in 2014, a similar pattern of moulding the Indian education system through hegemonic experiments is visible.

The BJP, which also runs the current state government in Assam and remains firmly rooted in the ideology of Hindutva and Hindu Rashtra (Hindu nation), has been making committed efforts to alter the dominant historical and political narratives to suit its ideological agenda, either through public addresses or public policies. Therefore, many see the recent move by AHSEC with great suspicion and cynicism.

Out of the ten topics that are listed for deletion for the Sociology paper, named “Indian Society”, seven of them are indispensable to understanding the sociology of Indian society. A sociological lens requires an urgent understanding of the principles of social divisions and hierarchies, such as caste, gender, tribes, ethnic communities and the likes.

The very foundation of the discipline of sociology is based on analysing these nuances of human condition and social life. When discussions such as these are removed from a sociology syllabus, the essence of the whole stream is ripped off from its core.

Political sociology, which is an inseparable section of the discipline, addresses the questions of nation building, legitimisation of power, and the processes and problems associated with it. How can one claim to study Indian society without understanding the various facets of its polity?

The social and political movements of the marginalised – women, tribes, religious minorities – which have structured and restructured Indian democracy are necessary lessons to learn for budding sociologists.

Caste is still a vital phenomenon in contemporary India and has found multiple ways of expressions in the Indian social milieu. From being an identity marker in official documents to a tool for discrimination and brutal atrocities, caste lives as a status, a practice as well as a structural principle of Indian society.

Caste is lived on a daily basis and it forms the foundation of other social institutions. Various historical events, such as colonialism, nationalism, and disciplinary developments such as Indology, have reinforced it. For a fair understanding of Indian social system, caste is indispensable and to understand caste, colonialism is indispensable. So are the questions of gender and women’s position in both social and political structures.

My nine years of training in sociology have taught me that sociology is the most misunderstood discipline in Indian academia. On the provincial level of education, its status is even worse. Development of sociology as a discipline is a new phenomenon as compared to other social science disciplines.

Also read ‘As Teaching Moves Online, Gender and Class Divides Flare Up Like Never Before’

One many argue that its misconstrued status is partly because of its younger position in the world of social sciences. Sociology has not been adopted as a core subject in many schools, colleges and universities and hence, its expansion is still in its infancy. At a time when sociologists in India are trying hard to change the flawed public conception that sociology is a subject merely for the civil services examinations, political pestering of the discipline makes this task more challenging.

As disciplines like sociology, which teach critical faculty and urge its readers to move beyond common sense, concentrate on the ‘whys’ and ‘hows’ and place every social phenomenon under a microscope, are curbed and moulded by vested political forces, we might be foreseeing a crude death of a potentially revolutionary academic endeavour.

Recalling Althusser, has the ruling party taken on the idea of an Ideological State Apparatus and realised its ostensibly undeniable capability to inject propaganda into young minds?

AHSEC’s act of syllabus alteration leaves many such questions for those on the receiving end.

is a Doctoral Fellow at the Centre for the Study of Social Systems, Jawaharlal Nehru University, New Delhi. Her primary area of research is the sociology of religion and caste, while her doctoral research focuses on ritual hierarchy, authority structure and everyday social relations within the Neo-Vaishnavite religious order in Assam.