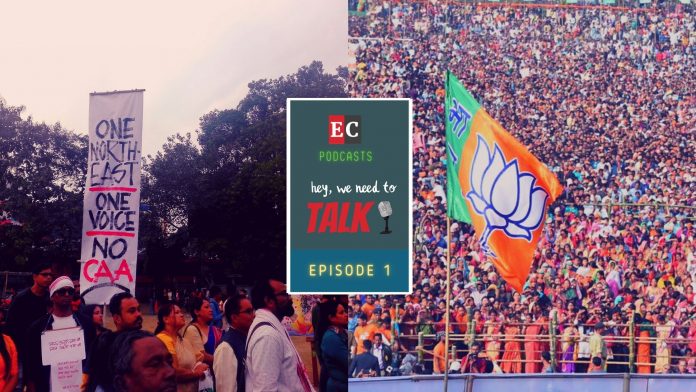 It is often argued that the pan-Indian Hindutva nationalism of the ruling Bharatiya Janata Party (BJP) can be subdued by many different forms of regional subnationalisms in India. Recently, reports in the media suggested that Bengali subnationalist narratives are on the rise in West Bengal as the state goes to polls soon, with BJP being painted as the “party of outsiders.”

A similar understanding prevails in Assam’s context, which is also marked by a distinctive and conspicuous form of subnationalist politics. With the state slated to go to polls next year, and the ruling BJP going all out to defend its mandate, regionalist-nativist political formations seem to be buckling up to defeat the Hindu supremacist party. These local political entities are often painted as secular ethno-nationalists who stand against the sectarian politics of the BJP.

In this first episode of Hey, We Need To Talk podcast series, Angshuman Choudhury speaks to Abhinav Borbora, a Guwahati-based political commentator and close observer of Assamese politics, to probe this common understanding from close quarters. Borbora argues that the ‘Assamese subnationalism versus Hindutva nationalism’ binary is a false one, and historical facts show that both have been on the same political page on more than one occasion.

If you have a patchy internet connection, you can also listen to the podcast on SoundCloud. It takes lesser data to do so.