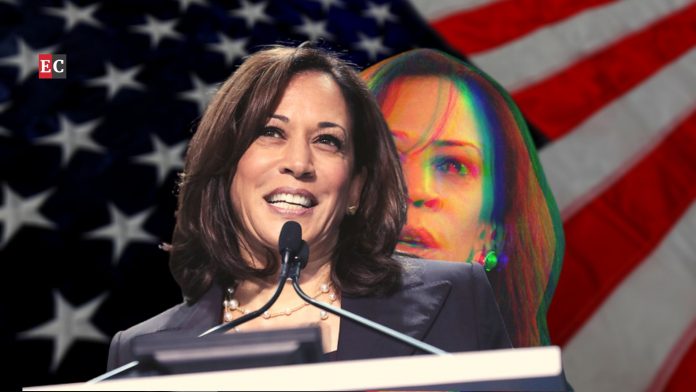 Ever since Joe Biden announced Kamala Harris as his running mate in the 2020 US presidential election, American and Indian media have constantly been singing paeans to the former California Senator and Attorney General.

This laudatory profiling of Harris only grew in tone after she became the first woman as well as the first woman of color Vice President-elect of the United States of America following an unusually long drawn-out counting that ended in a close win for Biden, as called by most media houses on 7 November.

Harris has been hailed as a feminist icon and an inspiration for young BIPOC and immigrant girls as both of her parents were immigrants to the US. Kamala’s father, Donald J Harris, immigrated from British Jamaica while her mother, Shyamala Gopalan, emigrated from Tamil Nadu, India.

Harris is being particularly celebrated on Indian social media with more and more people hailing her as a Black and/or South Asian feminist icon. With her background as a Senator from California, she managed to garner considerable support from liberal Hollywood celebrities like Mindy Kaling who constantly tried to push her to be a representative of South Asian culture.

All of this is just one side of the coin.

Growing up, Harris’s experiences were in no way similar to those of an average African-American person in the US. Her work as District Attorney of San Francisco, Attorney-General of California and Senator from the same state show that her political stances and policies are far from being progressive.

Scrutiny of Harris’s past work is absolutely necessary considering the country’s current political climate. This summer, the whole world witnessed one of the largest civil uprisings ever in the US, with slogans like ‘Defund the Police’ and ‘Black Lives Matter’ resonating from the East to the West Coast.

Harris’s work is everything these protesters came out to fight against. Following are some of the instances that prove the fact that America’s first woman Vice President-elect is neither a feminist icon nor a champion of human rights.

The instances cited here have been sourced from @niktaylorde on Twitter, with additional commentary by this author.

Although Harris built her presidential as well as vice presidential bid as a proud Black woman, her record proves that she was extremely hard on Black people as her policies disproportionately affected them, even for the smallest of offences.

Although Kamala harris is being branded as a feminist icon, her record on women’s (especially Black women) issues is steeped in anti-feminist action.

One of the biggest oppositions to the Trump administration from the liberals and the left was his inhumane action against immigration and undocumented immigrants, with most of the criticism directed towards the freehand given to the Immigration and Customs Enforcement (ICE).

But a 2008 policy supported by Harris has been doing the same in San Francisco city. Harris, then the District-Attorney of San Francisco city, supported a policy implemented by Mayor Gavin Newsom that required police to notify ICE about undocumented immigrant youth arrested for minor felonies or crimes. (More: Huffington Post)

It is important to note that defeating Trump does not mean Biden and Harris must be hailed as heroes who should be immune to any criticism. Trump’s defeat is definitely a welcome change, but we need to remember the Biden-Harris administration won’t herald fundamental changes for people belonging to marginalised communities across the US and in countries that the US has vested interests in.

One of the biggest reasons why all of Harris’s founderings are being neglected to prop her up as an icon is because she provides much needed representation, especially after the US’ four-year stint with an all-White administration that actively enabled white supremacist organisations.

Of course representation matters. Young Black and Persons of Colour (POC) girls across the US deserve to see someone who looks like them hold the country’s highest office. But representation does not end there.

Genuine and meaningful representation happens only when the representative actively works for the emancipation and liberation of the people they are representing. Otherwise it is just tokenism.

is a Hyderabad-based freelance journalist. She is currently pursuing her Masters in Communication at the University of Hyderabad.