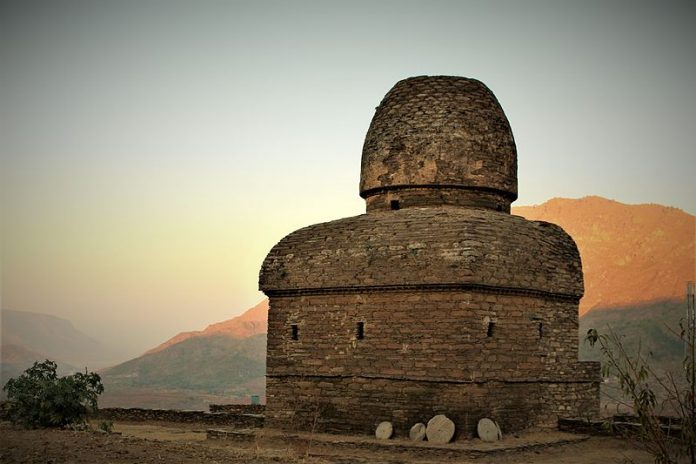 Amidst the raging COVID-19 pandemic in India and other crisis events, such as the Galwan Valley stand-off at the sensitive India-China border, a seemingly un-interesting piece of news linked to India’s other major rival-neighbour, Pakistan, emerged.

On 16 December 2020, Qamar Abbas Khokhar, the Pakistani ambassador to Vietnam, did a ‘Twitter surgical strike’ by claiming Takshila University, and one of its renowned students Kautilya Chanakya, as products of ‘Ancient Pakistan’. As a natural law, the claim was responded with a silo of counter-tweets and memes from Indian users.

While it did not lead to any diplomatic jousting between the two South Asian neighbours, the tweet by Khokhar was fairly curiosity-inducing, especially for someone interested in South Asian history and historiography.

For me, it was interesting for two primary reasons – first, the popular idea of Pakistan as an Islamic homeland whose beginning is traced from the Arab invasion of Sind by the Umayyad Caliphate General Muhammad bin Qasim in 711 AD and the arrival of Islam; and second, the fact that the tweet came in a year when Pakistan seems to have found a new national hero in Ertugrul Ghazi, the father of Osman Ghazi who founded the Ottoman empire in the 14th century.

The emergence of Ertugrul Ghazi can be attributed to the raving popularity of the Turkish drama series Resurrection Ertugrul in Pakistani households. The show was also actively promoted by Prime Minister Imran Khan as one that teaches true Islamic values.

In such an atmosphere marked by ideas of a ‘pure, Islamic past’, the ‘reclaiming’ of non-Islamic icons such as Takshashila and Chanakya might seem strange and out of place for a nation that sees itself as a modern Dar-al Islam (Land of Islam). However, on further digging through South Asian academic journals, one may learn that such a reclamation is not unique to the 21st century.

In fact, Pakistan has a long history of co-opting non-Muslim cultural and religious icons, especially Buddhism, since its founding years in 1947. Pakistan’s relationship with its Buddhist heritage since 1950s must certainly be probed deeper.

Buddhism as an anti-Hindu India tool

In the early decades following Pakistan’s establishment in 1947 and given the vast geographic incongruity between West and and the East, scholars and intellectuals struggled to frame a unifying historic narrative for the new nation. Although established as the homeland of South Asian Muslims, there continued to be debates on the role of Islam in political and cultural life of Pakistan.

To overcome such difficulties and at the same time highlight its newly carved boundaries and separation from India, Pakistani scholars began looking at the nation’s pre-Islamic past for justification. Such justification, as per the scholar Andrew Amstutz, was found in Buddhism that flourished in the Gandhara kingdom located in present-day Peshawar Valley, including the Taxila and Swat regions.

This new project of ‘Buddhist legitimation’ of Pakistan was spearheaded by museums, such as the National Museum in Karachi and Lahore Museum, as well as museum guide journals, such as Ancient Pakistan, which focused on colonial archaeological notions of ancient Buddhism as the representative of rational ‘Protestant’ tradition that stood up to the superstitious ‘Catholic’ Hinduism.

By focusing on the perceived Buddhist opposition to Hinduism, an attempt was to bring about an association between Buddhism and Pakistan tied together in their opposition to ‘Hindu India’. In addition, focus was also put on the difference between Gandharan and ‘Indian’ Buddhist art traditions which, as per curator Mohammad Abdul Shakur of Peshawar Museum, “advanced along separate paths, in different directions” owing to Gandhara’s “political isolation from India proper.”

Hence, while Indian art had an ‘Eastern heritage’, Gandhara Buddhist art with its Greco-Roman influences, formed part of the Western cultural sphere of Roman Empire without having any connection with the ‘East-looking Indian Buddhist traditions.’ Thus, in this period following 1947, Buddhism, or precisely ‘Gandhara Buddhism’, and its ‘Western Roman art form’s opposition to Hinduism and Indian ‘Eastern’ art formed a part of the narrative of Pakistan’s separateness from India “since ancient times.”

The Cold War period in the 1950s also saw Pakistan joining the US-led bloc and organisations such as the South-East Asian Treaty Organisation (SEATO) formed in 1954 in Bangkok. As a founding member of SEATO and eager to cultivate ties with Southeast Asian nations, Pakistan once again utilised its Gandhara Buddhist heritage to serve its diplomatic purposes in the Indo-China region.

This was highlighted in the speeches delivered by the Pakistani historian and politician Ishtiaq Husain Qureshi in his tour of Southeast Asia in 1961, in which he framed Buddhism as a pre-Islamic Pakistani tradition that had challenged Brahmanism (in India) since the time of yore. Going further, Qureshi creatively portrayed Muhammad bin Qasim as the ‘saviour’ of ancient Pakistan’s Buddhists from the tyranny of the Hindu Brahmanical king of Sindh who was overthrown by the ‘open cooperation between Arabs and Buddhists’ and the latter took an active part in Qasim’s local administration.

The same narrative of ‘Muslim saviour of Buddhists’ was also applied in the case of East Pakistan whereby the Turks had liberated the Buddhists from the oppression of the Hindu kings of Bengal. The ‘saviour complex’ served the twin functions of depicting the modern-day Islamic Republic of Pakistan as a protector of Buddhism in front of the Southeast Asian audience. At the same time, it established a connection between the geographically separate West and East wings of the nation.

The narrative of Buddhism in East Pakistan, corroborated by archaeological discoveries of Buddhist remains in Mainamati, was further utilised for promotion of Pakistan-Southeast Asia ties. This was evident in the reports of Dr FA Khan, Director of Archaeology and vice-president of the Museums Association of Pakistan, who opined that Buddhism, which developed roots in East Pakistan, possessed a ‘Hindu-Buddhist’ synthesis art as opposed to the Gandharan ‘Greco-Roman’ form and it was this ‘East Pakistani’ Buddhist tradition that travelled eastwards to the Indo-China region.

Thus, as a result, the current Southeast Asian countries owed a large part of their historical heritage to East Pakistan and the modern Pakistani nation, which although Islamic, had protected Buddhism from tyrannical ‘Brahmanism’ rule.

However, the ‘Islamic saviour’ notion did run into trouble when Thai students confronted Qureshi about Buddhists being a minority in East Pakistan (35% of population), confined only to the Chittagong Hills. Again, Qureshi creatively manipulated history by claiming that with the downfall of Arab rule in Sind, the Hindu kings soon re-established their rule while cracking down upon the Muslims and Buddhists in West Pakistan. In East Pakistan, since many Buddhists found the Turkish rule to be benevolent and not being conversant with their own religion, they converted to Islam.

A new trend emerged during the first military government under General Ayub Khan from 1958 to 1969, which saw Pakistan’s focus on creating an ‘indigenous version of Buddhism’ to consolidate the latter’s position in the national narrative. Such measures received the active support of the Ayub Khan government, an era that has been described as the ‘golden age’ of Pakistani museums.

Attempts to develop an indigenous variant of Buddhism began by first rejecting the over-emphasis on ‘Western Roman influence’ and instead focusing on the ‘local influences’ on Gandhara Buddhism. At the same time, the ‘revolutionary influence’ of Buddhism in Gandhara and Taxila (‘Ancient Pakistan’) was stressed upon, which as per Abdul Shakur in 1960s, had transformed the socio-religious life to such an extent that ‘Gandhara became the homeland of Buddhism’.

Also read ‘Is Imran Khan the Man That Pakistan Needs?‘

Such narratives portrayed Pakistan as the homeland of traditions such as Buddhism and Islam, which had resisted ‘Brahmanism’ or Hindu domination since ancient times and by extension, underlined the opposition of the new nation to its neighbour India. These ideas, in turn were utilised by the Ayub Khan government as a means to mobilise the population as the members of a nation, which although young, had its own ancient heritage as old as the Sumerian and Egyptian civilisations.

However, the Pakistani state’s love affair with Buddhism came to an abrupt end with the dictatorship of General Zia-ul-Haq. Zia, still with fresh memories of the 1971 defeat and separation of East Pakistan, sought the ‘unifying force’ for Pakistan in orthodox Islam than in Buddhism. Although even in the 1950s, Pakistani textbook curricula did not include non-Islamic traditions due to strict government regulations, the state gave museum curators and scholars the autonomy to creatively engage and manipulate Buddhism to serve the interests of the nation.

But under the regime of Zia-ul Haq from 1977-88, no space was given to any form of un-Islamic culture or religion to flourish in the country or in national narratives, thus ending Pakistan’s tryst with Buddhism.

Coming to the present day, Buddhism and sites such as Taxila, Sircap and Margalla hills, seem to have taken a back-seat in the collective memory of Pakistan despite the efforts of museums and scholars, such as the anthropologist and author Haroon Khalid, in preserving and retelling local legends of such sites as Dharmarajika stupa constructed by the Kushan dynasty during the 2nd century CE.

In addition, attacks on Buddhist sites, such as the Taliban destruction of a Buddhist statue in Swat in 2007, the defacing of Buddhist rock carvings in Gilgit-Baltistan by miscreants supported by the Pakistan Army in May 2020 or the vandalism of an ‘un-Islamic’ Buddhist statue by construction workers in Khyber-Pakhtunkhwa in July 2020 speak of a situation diametrically opposed to the romance of 1950-60s.

Yet, the ‘Naya Pakistan’ of Imran Khan, like the Pakistan of 1960s, has again deployed the use of Buddhism in cultivating foreign relations, as was seen in the permission given to the Korean Jogye Buddhist order to establish a monastery in Taxila and banking on the figure of Malananda, the Gandhara monk who spread Buddhism in the Korean kingdom of Baekjae, to boost South Korea-Pakistan ties.

In addition, Pakistani officials, such as Islamabad mayor Anser Aziz, was seen celebrating Buddha Purnima in 2018 with the Nepal Ambassador, possibly with the ostentatious motive of building friendship with another of India’s geopolitical neighbours. Similarly, Buddhist sites in Gandhara saw the visit of Sri Lankan ministers and monks back in 2016.

Despite the well-known condition of non-Islamic traditions in present day Pakistan, Imran Khan seems to be attempting to rekindle the lost tryst with Buddhism, along with the revival of the Sikh relationship of Pakistan as seen in the opening of the Kartarpur Corridor.

Such experiments carry the potential of projecting the idea of a pluralistic ‘Naya Pakistan’, which equally cherishes its non-Islamic legacy in front of other nations. Who knows, Khokhar’s tweet on ‘Ancient Pakistani Taxila University’ might be a part of this new image of ‘Naya Pakistan’ and legacy of Qureshi’s 1961 ‘shared Buddhist’ heritage of Pakistan and Southeast Asia? Time and further research might tell us.

is pursuing a Masters in Politics and International Relations from the Central University of Gujarat, India.