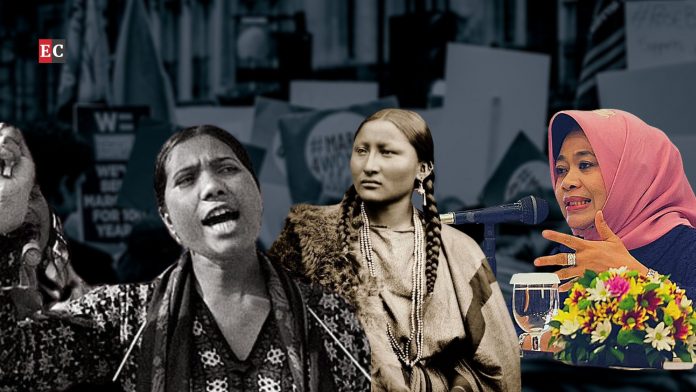 ‘Feminism’ has now become a buzzword in every almost sphere of our lives. It is used by different social actors in different scenarios – be it the commercial strand that uses the ideology to sell and advertise products or the celebrity strand where movie stars have started using the feminist discourse to numerous benefits.

These strands often come under attack from mainstream feminist circles and civil society in general as being responsible for furthering biases and stereotypes that already exist in society. Amidst these controversies, people lose sight of the actual movement such that the word “feminism” or “feminist” tends to become a killjoy. This is sad and unnecessary.

Despite the misreadings or misinterpretations of feminism, it is important to keep the essence of the movement alive. We can keep feminism from falling off the bandwagon by recognising the merits and virtues of such controversies and debates. Accepting the myriad paths feminism might take is essential for the sake of the movement itself.

There is more merit to controversy than is usually assumed. Historian and philosopher, Michel Foucault, argued how repression of sex in the seventeenth century eventually resulted in “a veritable discursive explosion” such that sexuality became widely discussed within institutions of family, schools, and the likes.

In a similar vein, we can argue that these newly developing strands of feminism might essentially function to strengthen the feminist movement (even from the criticisms they give rise to).

Feminism largely propagates equality of gender(s) in the spheres of politics, society, economy, and culture; freedom from discrimination and violence based on gender identity; and the right to be or exist independently. However, it is essential to maintain that the feminist movement or feminism is not unitary in nature.

We must, therefore, identify the differences and appreciate the feminist movement for its multiplicity rather than despite it. In fact, postcolonial feminist writer Chandra Talpade Mohanty questions the colonialist discourses of “white feminism” that paints victimising representations of women of the so-called “third-world”.

Therefore, it is particularly useful at this juncture to revisit some of the diverse feminist strands around the world that will imply a multiplicity with respect to feminism. in this regard, let us look into three diverse forms of feminism(s) – Islamic Feminism, Native American Feminism, and Dalit Feminism – especially for their use of dominant tropes and symbols to revert hegemonic patriarchal structures as well as the dominant feminist movement.

These counter-hegemonic women’s movements will open up the wider field for talking about “feminisms”, which will then allow us to further observe the productive potential of commercial or celebrity feminism that might eventually keep the movement in the public discourse in a constructive way.

Posing a challenge to Western feminism, most Islamic feminists adopt strategies that do not outrightly reject religion, but reinterpret the symbols and texts, to counter hegemonic male interpretations of Islam as well the secular feminists who give up religion for “freedom”.

In keeping with this, in recent years, Islamic feminists have turned to the religious texts and traditions to read them critically, reinterpret them from a woman-friendly position and displace the traditional, well-entrenched misogynist understandings that have long held sway.

Their attempts have ranged from contextualising hadiths (the collection of reported teachings, deeds, and sayings of the Prophet) and highlighting the woman-friendly aspects of the religion. Apart from such reinterpretation of symbols and texts, cultural production may also become a tool of resistance in a climate of social repression.

Neluka Silva, by taking up the case of We Sinful Women: Contemporary Urdu Feminist Poetry, which contains the works of women poets in Pakistan, has shown how poetry which is often regarded as a private, “emotional” genre, can and does become an enabling vehicle during political and social upheaval.

Afiya Zia, a feminist activist based in Pakistan, comments on the rise of a new kind of feminism that is rooted in Islamic discourse, and is non-confrontational, privatised, and personalised – whose objective is to ‘empower’ women within Islam.

Native American feminism is another such counter-hegemonic movement that runs its discourse apart from the mainstream feminist movement. It was a welcome change in my feminist history class that opened our eyes to the importance of diversity.

Annette Jaimes’s early 1990s article, American Indian Women: At the Center of Indigenous Resistance in North America, was one of the most prominent writings on Native American feminism. According to Jaimes, feminism is an imperial project for which several Native American activists reject the label “feminist”.

However, there are others embracing the phrase “feminism” who argue that feminist, far from being a “white” concept, is in fact an indigenous concept that white women borrowed from Native women. Both these groups nevertheless fight for land and decolonisation, making the binary between “feminist” and “non-feminist” almost redundant.

Charlene Teters, an artist who paints women of the Native American community to sort of reclaim and reassert their identity, is another example of a counter-hegemonic intervention. She uses popular culture as a medium to advance her politics.

A closer-to-home strand of feminism that often stood in contested terrains with “mainstream feminism” was Dalit feminism.

The early 1990s saw the assertion of autonomous Dalit women’s organisations at both regional and national levels. Noted feminist and sociologist, Sharmila Rege, had pointed out how Dalit women’s assertion challenged several crucial theoretical and political underpinnings of “Brahmanism” that existed within the wider feminist movement and Dalit policies.

Dalit women, while posing a challenge to upper caste, bourgeois, savarna women, have also reinterpreted hegemonic symbols and myths that are Brahmanical in character. For instance, many women try to retell the Ramayana from a woman’s perspective.

What of celebrity feminism?

These examples from diverse spatial and temporal contexts demonstrate how several varieties of feminism exist, which seek to move beyond any dominant feministic fervour. Celebrities, in the same way, might function as critical sites of impending feminist thoughts that can be mass circulated.

Emma Watson, championing the virtues of feminism at the United Nations, is a case in point. While celebrities like Kareena Kapoor and Tabu consciously eschew the label “feminist”, it is a welcome change to see others like Priyanka Chopra, Swara Bhaskar, and Kalki embrace feminism.

Albeit the problematic character with regards to this embracement, it still is a gateway to a collective conversation. This might also lead them in making better choices for the celluloid.

Janell Hobson, a feminist scholar, has argued how celebrity feminism can and should be placed alongside grassroots feminism, academic feminism, and other spheres of influence. She goes on to show how the rise of the internet and social media has democratised multiple voices, enabling celebrity feminism to exist as a dialogic interaction with everyday feminism.

Apart from celebrity feminism, commercial feminism has also many a time functioned to promote sex-positive images and practices.

For instance, the recent Ariel #sharetheload advertisement that raises pertinent questions on gendered socialisation practices or the Myntra advertisement that recognises the biases a pregnant woman face at work despite being equally good at her job, showcase how commercial feminism might have its own perks. Notwithstanding the pitfalls of “femvertising” (which are many), it is important to recognise their creative potential and hence, the different contingencies they might engender in toppling existing structures and processes.

This is not to say that criticism is inessential. Critical discussions pertaining to them are significant as well. For instance, Bollywood actor Kangana Ranaut’s self-proclaimed feminist image is highly problematic, given her direct attack on several marginalised groups online.

Nevertheless, it is also important to acknowledge that the discussions arising from them might essentially keep the feminist movement fresh and new.

is a Senior Research Fellow at Tata Institute of Social Sciences, Mumbai, where she is also pursuing her PhD from the Advanced Centre for Women’s Studies. She works in the area of gender and media studies, popular culture, ethnomusicology, and folklore studies, specifically with respect to music and performance studies in Assam.