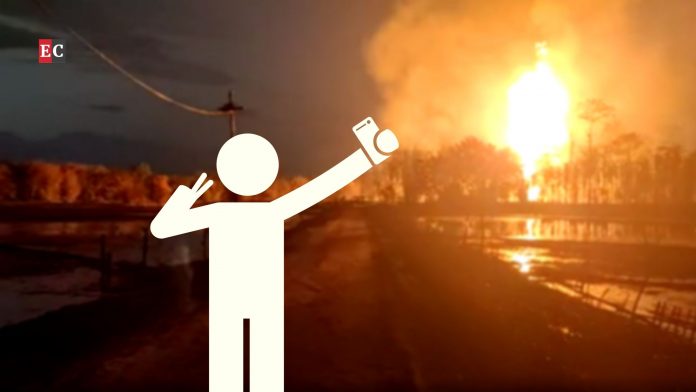 One summer afternoon in 2017, overhearing this conversation bewildered me. I was in Bokakhat, a town in central Assam, a state in the northeast of India. That year, floods had ravaged the state, including patches of the town. Small groups of people had crowded submerged streets.

Along with others in the crowd, the participants of the conversation were busy taking photographs and mostly selfies, with the submerged road for background. Two years later in another town, I witnessed health workers gleefully posing for selfies with submerged roads and paddy fields and sharing it among themselves.

Even a minimal conversation with the people reveals their excitement of sharing such images and videos on their social media groups and handles. In June 2020, when the Baghjan blowout unfolded in Upper Assam’s Tinsukia district, a similar trend was observed.

Devadeep Gupta, a visual artist from the district who conducted a preliminary, imagery-based investigation into the disaster, was disheartened to witness the conduct of local populations from neighbouring villages and towns at the disaster site. They were busy taking selfies with the fire as the background and most importantly, in a state of elan. These are the selfie-survivors of a disaster.

Who are they and what do they represent?

People in Assam and many parts of northeast India are well-versed with disasters – floods, earthquakes of various intensities, landslides, riverbank erosion, ethnic conflicts, oil spills and fires and so forth.

Notably today, directly, and indirectly disaster-affected populations appear to move beyond the binary of victims and survivors in Assam. It is becoming overwhelmingly evident that a third type of affected population exists within a disaster context, that is, the ‘selfie survivors’.

These are the well-meaning, not directly affected, curious onlookers, hanging around a disaster site – posing, posting, and sharing selfies and images from the disaster site on social media platforms. They form the island of people who have lived through generations, experiencing various disasters unharmed from a safe distance.

But they are experienced, nonetheless, witnessing the fate of people who have lost lives, livelihoods and homes in recurrent disasters and so, are indirect (generational) survivors themselves. For such unaffected populations living in geographical proximity to a low or medium-intensity disaster site, the latter becomes a photo op. Posting selfies with the ongoing disaster as the background appears to have become normal and an accepted norm of sorts.

Over the last decade or so, the world has watched and participated in the great advancements of technology. These advancements have spilled over into our personal and public lives via numerous social media platforms, providing us with news and making news out of us. By that measure, posing for a selfie must not surprise a soul in 2021, unless if and when a selfie is taken at a disaster’s site and more so, in a celebratory manner when it invites a conversation.

So, what does an army of selfie-survivors surrounding a flood or a fire caused by oil spill, reflect on the societies that go through recurrent disasters? What does that mean for the actual victim-survivors of that disaster?

This is the age is of trending hashtags and ‘1-minute reads’ of news of any kind. Disasters fit well into this corporatised, breaking news model of mainstream media and social media platforms due to a perceived ‘surprise’ element of the disaster event by the audience.

The surprise element is associated with an almost defunct, western construct of a disaster as “an unforeseen and often sudden event”. Global academic discourses and aid policy/humanitarian aid practices have moved beyond a simplistic, one-size-fits-all understanding of defining disasters. The Indian state too does not define disasters as sudden events in its core policy document.

Yet, disasters continue to have a colonial and cosmic perception in popular imagination in India. Add to that, a sudden disaster has a surprise value, making it an excellent case for the diminutive attention capacity of today’s audience, within the so-called mainstream, alternative (traditional media) and social media.

The contested approach of traditional media in covering disasters and other humanitarian crises throughout the globe is well-documented. Research indicates media being attracted towards the “biggest” stories in their coverage of disasters.

Noting the media coverage of disasters in 2014, the Inter-Agency Group of Humanitarian NGOs of Assam, observed “a relative lack of media reporting on the (disaster) situation in Assam and Meghalaya” (‘disaster of the poor’) as opposed to the wide coverage of the floods of Jammu and Kashmir (‘disaster of the middleclass’), as per the Global Estimates 2015 Report.

Social media too plays an inevitable part of everyday lives today. Citizen journalism, especially during humanitarian crises, like the migrant crisis in India in March 2020, is a beautiful elaboration. That said, contrasting research points towards risks of social media spreading misinformation during a crisis and with higher intensity, sometimes leading to misdirected actions for safety by survivors.

Social media has also been argued to have a bystander effect on common citizens, while documenting violent or disturbing events. Nevertheless, the underlying principle of our social media behaviour is a fierce competition for attention.

Similar to the giant social media and traditional media corporations or agencies that are fast becoming champions of attention economy, individual users (citizens) of social media too compete for attention from our audience, albeit unintentionally. It is the very nature of the colossal octopus called social media.

From that point of view, the phenomenon of selfie survivors makes perfect sense. Never mind that sharing selfies from a disaster site might contribute to a distorted idea of disaster tourism, while also strengthening the concept of bystander effect. What it most importantly does is this – a disaster selfie helps us in grabbing immediate attention from our followers, resulting in higher numbers of ‘hearts’ and ‘likes.’

Enablers of disaster normalisation and its aftermath

Any form of popular and public discursive practices, including traditional media and social media, help in constructing a collective perception and discourse about a given issue or event. Such practices epitomise, produce, and reinforce either the extraordinariness or the mundaneness of an issue or event.

Research indicates that “(traditional/social) media tends to devote a great attention and detail to unusual or violent accounts while giving much less or no attention to the mundane”. Reporting and perceiving of recurrent disasters in India in the manners noted above consequently epitomise the mundaneness of recurring and slow onset disasters (such as floods and riverbank erosion in Assam and Bihar, cyclones in Sundarbans, drought in Maharashtra and so forth).

This mundaneness then, is equated with a gullible ‘normalisation’ of the recurrent disasters in the perception of common citizenry and policymakers alike.

In Assam’s recurrent disaster context, especially for floods and riverbank erosion, the absence of a ‘surprise’ element due to the disasters’ recurring nature, aids in normalising disasters. This is then enabled by the absence of local and national media in post-disaster sites (for longer term coverage).

A recent case-in-point is the coverage and conversation around the ongoing peaceful protests of the indigenous Mising community of Laika-Dodhiya villages in Upper Assam’s Tinsukia district. The protesters have been surviving a perennial state of displacement since the last seven decades. They have faced multiple displacements that originally resulted from the 1950 earthquake, then from consequential floods and riverbank erosion.

Currently, threat of yet another displacement looms over them because of (in)actions of the policymakers. This threat is being emboldened indirectly by the conspicuous absence of media, both local and national, from adequate coverage of the protests and minimal conversations in social media.

The exception, of course, is a triggering event that could invite more eyeballs – ‘death of tribal women protestors’, ‘protestors clash with security’, or ‘residents step-up protests ahead of Prime Minister’s visit’ (when the protests have a national relevance).

Similarly, every monsoon, when the drowned houses dry up following a flood, and relief camps start emptying out, cameras, journalists and selfie-survivors become infrequent and gradually, become altogether absent. So, when a town or a village is flooded in Assam today, unaffected citizens from far and near come to “see the paani” with amusement and become selfie-survivors. Of course, until the next disaster knocks on their neighbour’s doors.

Why talk about a disaster during non-disaster times?

Informed conversations matter. So does silences by choice.

Remaining silent or engaging in ill-informed conversations around recurrent disaster victim-survivors further the invisibilisation of an already marginalised (affected) population. The (in)actions of policy-makers, the affected country’s media and common citizens collectively contribute towards this.

The production of such a narrative and its reinforcement, thus, enables the normalisation of disasters and its aftereffects as everyday realities in the society, with dire consequences for the actual victim-survivors. This latent process is evident in the case of recurring disasters in India in general and Assam in specific.

Issues related to recurrent disasters and disaster survivors have been so normalised in public and popular discourses or practices that discussing about the normalisation itself reads as ‘repeatitive and old news’.

Why talk about the July floods in January?

Because it is vital that we continue to highlight the issue of normalisation of recurrent disasters even during non-disaster periods, repeatedly and explicitly. The absence of flagging a disaster’s normalisation only feeds into its normalisation.

That, in turn, implicates an act of omission on our part as sentient citizens – of freeing the powers that be from any accountability of their (in)actions while also allowing them to weaponize the same issue for petty yet lasting political gains. Unintentionally though, in the case of recurrent disasters, our silences can aid the continued violence of basic human rights of our fellow citizens in Assam and elsewhere in the country, year after year, decade after decade.

Instead of becoming selfie survivors, let us make informed conversationalists out of ourselves.

is currently a PhD researcher at the International Institute of Social Studies, The Hague. Her research is part of the Erasmus Initiative, Vital Cities and Citizens (VCC). She works with families facing protracted disaster-displacement in Assam, India.