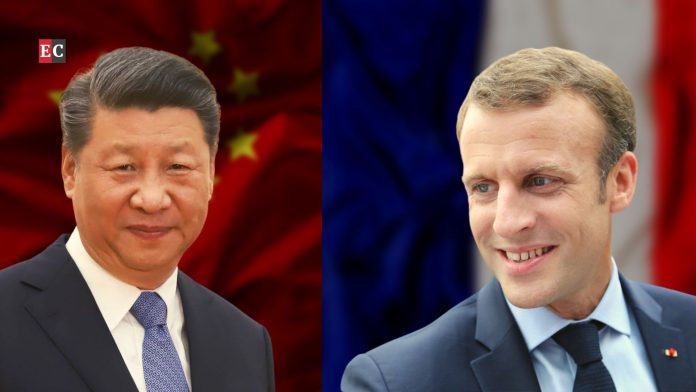 China’s relations with France, one of its largest trade partners from Europe, have been marked by cooperation and dialogue on global economic governance, climate change and regional crises. Though the COVID-19 pandemic has created some hiccups in their long-standing bilateral relationship, Paris remains committed to resolving issues of global concern and hence, has toned down on its anti-China rhetoric.

This is reflected in both soliciting Beijing’s support against US decision on the Paris Climate Treaty and open trade, as well as seeking Beijing’s complete assent to the norms of World Health Organization (WHO). Former French President François Hollande undertook his maiden visit to China in November 2013 and many reciprocal deals were signed, laying a strong foundation for business exchange between the two, including on nuclear power.

Besides the fact that France was historically one of the first nations to recognise China’s sovereignty in 1964, the Sino-French relationship has gradually evolved into a “global strategic partnership” since 2004. Luxury trade and tourism have been the two most beneficial areas of trade.

Looking at the overall contribution of France to China’s trade, Beijing is Paris’ seventh largest customer and second largest supplier. More than 1100 French companies are stationed in China and provide huge employment to locals. Yet, trade between the two countries is highly imbalanced. Therefore, rebalancing the same remains a high priority for both countries. Trade is not restricted to the mainland, but also thrives tremendously in the two Special Administrative Regions of Hong Kong and Macao.

Traditionally, France supplied a huge stream of H-175 helicopters to Hong Kong, and the French community in Hong Kong is the second largest in Asia. French exports have doubled over the last decade, with Paris being the fourteenth largest foreign investor in Hong Kong and the second-largest from Europe.

Besides the usual scientific, academic and research cooperation, the French Study Centre on Contemporary China (CEFC) established in 1991 remains the only European research centre in the country dedicated to studying contemporary China. France is Macao’s third largest supplier of goods as it occupies 8% of import market share as of 2015 (just behind continental China, Hong Kong and Switzerland).

Further, there is a huge presence of French population on Chinese soil. Before the COVID-19 pandemic unleashed global shutdown of business channels, trade exports to Macao itself totaled €823 million and essentially consisted of agri-food products (25% of our exports, mainly wines and spirits), leather goods and luggage (17% of our exports), perfumes and cosmetics (15% of our exports) and jewelry (15%) (till 2018).

In 2020, the trade volume exceeded 62 billion USD from just 11.5 billion USD in 2000. However, large parts of Sino-French relations are marred by acrimonious sentiments of racism, human rights issues, the ‘One China’ principle and French defence supplies to the Republic of Taiwan.

Chinese President Xi Jinping had made his first visit to France in 2014 and again in November 2015 at the time of the Paris Climate Conference, unrolling a welcome package for the French under his pet initiative of Belt and Road Initiative (BRI).

Being a strong supporter of multilateralism, France showed high amenability to get involved in the BRI. Trade relations further improved when Macron, during his 2019 trip, signed 40 agreements worth 15 billion USD, embracing the trade, tourism, health, aviation, energy, and digital technology sectors. He struck a whopping 34 billion USD contract for Airbus to supply 300 aircrafts for the Chinese aviation sector.

Despite these gains in trade, Macron did not stop himself from criticising China’s handling of the Hong Kong protests and called for a UN inquiry into alleged human rights infringement in China’s Xinjiang province. Macron also showed some acquiescence to Chinese efforts to firmly integrate Hong Kong into the nation with the new National Security Law.

With the expansion of the e-commerce market and increase in consumption power in China, more French brands are entering the Chinese market through cross-border e-commerce, especially luxury brands that have been the hallmark of French oligarchy. Reciprocally, the leadership also did not completely ban the Chinese firm Huawei, but rather let the local players silently avoid some of its products, thus skirting “decoupling.”

This exchange in trade as well as diplomacy can also be attributed to China’s overwhelming interest in investing in France under the BRI project and its huge consumption capacity, which was reflected in the 2nd China International Import Expo (CIIE) organised in 2019. Unlike the American ideological predisposition to neoliberal economics, the French have an alacrity for larger state role in production based on socialist organising principles, state-owned enterprises, and a thicker regulatory framework that are endorsed by the French under a China-like state-led developmental model. In fact, in 2020, China displaced the US as Europe’s largest trading partner.

The rapid pace of change can be attributed to the success of projects like the BRI’s Europe-China Railway, which has connected the Eurasian landmass with a vast freight network and cut the cost of journey dramatically, thus proving to be a faster and more competitive means of transport than traditional shipping routes. The BRI has offered low rates of interest on loans and construction assistance at cheaper rates, and the rail road proved more effective during the pandemic whereby medical supplies were transported at faster pace. Such projects under the BRI have, in fact, brought about stronger regional integration.

Thus, over the years, China and France have sustained a positive momentum in trade in various sectors. However, as mentioned before, a large part of this trade had been traditional luxury and tourism trade, including wines, perfumes and other products form the fashion industry. Therefore, bringing about regional integration has given more scope for cooperation with smaller players, like Mauritius, locate at the nub of this luxury and tourism trade.

Most of the luxury brands require articles, which are procured from African countries, and China in its effort towards cost-optimisation has kept all its options open. Just like the port cities of Hong Kong and Macao, Mauritius provides an easy transit point for Chinese and French goods.

China’s efforts to procure some of these essential trade items for luxury trade were enhanced after it entered into a Free Trade Agreement (FTA) with the Mauritian government in 2019, which would come into force in January 2021. The FTA pertains to trade in goods and services, investments, and economic cooperation where tariff lines will be phased out over a period of 5-6 years. Interestingly, the goods mentioned in the agreement pertain mostly to those originating or being manufacture in Mauritius, indicating a strong hunch for Chinese preference for primary sources of luxury trade.

However, the fact that the island is a former Dutch colony may be a cause for some concern in this trilateral trade. The French are accustomed to obtaining their primary resources from this island and also having free access to the island under its tutelage, since the island was developed into a harbour under the French Governor, Mahé de Labourdonnais. Hence, the impending social relations may cause some discomfort amongst the locals and the Chinese.

The island holds an extremely strategic position in the Indian Ocean and China’s forays here have again instigated a race for dominance as India also tried to woo Mauritius with a trade deal in February 2021.

The reason for concern is not just China’s growing presence in the nation’s trade, but also the political developments that may ensue. The nation has been witness to internal turmoil as the leadership has resigned and called for a fundamental change in the nation’s political set up. Notwithstanding, China and India have made some presence felt in this traditional French territory that has gained prominence due to its traditional strategic position.

The French seem to be relegating themselves to a secondary presence as the Chinese technology and infrastructure investment outpace their traditional role in the island. It is with due credibility that China’s economic dominance has gained traction in both Mauritius as well as France, as the country responded rapidly despite the COVID-19 outbreak and returned to growth in 2020, allowing it to export well as keep up the pace of domestic consumption. This benefited European exporters.

Sino-French relations, therefore, will continue to enjoy the benefits of mutual assistance and diplomatic endeavours bolstered by strong state inclinations.

is an independent analyst who works on Chinese nationalism and autonomous regions of China. She is the author of China’s Discursive Nationalism (2012) and has been associated since 2013 with V-Dem project, University of Gothenburg.