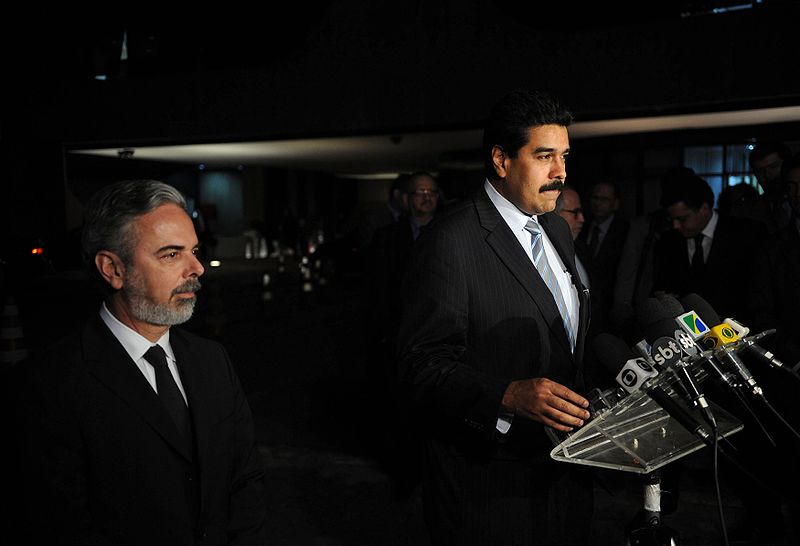 TEHRAN (Tasnim News Agency): “No item in international law allows the US to misuse its judicial procedures to meddle in the domestic affairs of other countries,” Iranian Foreign Ministry spokesperson Seyed Abbas Mousavi said on Friday.

Mousavi said the recent American accusations sought to “lay the groundwork for a coup d’état, regime change or an assault against a sovereign country”.

On Thursday, Washington announced that it had “indicted” Venezuelan President Nicolas Maduro and several top aides on Thursday for “narco-terrorism”.

The US State Department offered a reward of $15 million for information that could lead to the arrest or conviction of the senior Venezuelan figures.

Speaking on Friday, Mousavi said Washington’s “international application of its domestic laws” against Venezuela threatens the sovereignty of the United Nations and the international community.

He added that international inaction and silence regarding the matter assisted the US’ “illegal behavior”.

“We urge all members of the international community to take a united stance defending multilateralism and to loudly say ‘no’ to the US’ aggressive unilateral actions,” he added, Press TV reported.

Speaking during a televised speech from the presidential palace in Caracas late Thursday, Maduro rejected the “spurious and false” US accusations.

He said the claims were part of a plan organized by the US and Colombia to force him out of power.

“You are loathsome, Donald Trump!” said Maduro who was flanked by several officials also indicted by the US State Department.

Maduro, Venezuela’s president since 2013, has been the target of a fierce overthrow campaign by Washington over the past years.

Washington’s latest provocations against Caracas come as wide-spanning US sanctions have been targeting the country struggling to contain the coronavirus pandemic.

Tehran, which is the target of what many have described the most aggressive US sanctions campaign, has also faced obstacles in dealing with the COVID-19 outbreak due to American bans.

The US re-imposed sanctions on Iran after it withdrew from the 2015 Iran nuclear deal in 2018.

Various international leaders, figures and groups have singled out Washington’s anti-Iran sanctions for hampering Tehran’s efforts against the coronavirus outbreak.

The letter described COVID-19 as the “common enemy” of mankind and said unilateral sanctions imposed were complicating the fight against the coronavirus.

“It is necessary that Iran and Russia’s medical and clinical institutions cooperate and exchange experience in containing the coronavirus and curing victims of the disease,” he said.

He added that Iran “urges the suspension of all of Washington’s inhumane sanctions, which also ban medical supplies”.

He said that the US sanctions have “threatened the lives of thousands of innocent individuals around the world.”

For his part, Volodin welcomed cooperation between the two countries against the COVID-19 pandemic.

“Russia is opposed to US sanctions, which in such circumstances, hamper international efforts against the coronavirus,” he added.

Despite imposing crippling sanctions hampering anti-coronavirus efforts, US President Donald Trump has claimed to be ready to offer aid to certain countries affected by the disease, specifically naming Iran and North Korea.

The Trump administration’s offer of aid has, however, been firmly rejected by sanctioned countries as the widespread bans have effectively created major obstacles for anti-coronavirus efforts.

Speaking to the New York Times, Jarrett Blanc, a former State Department official who oversaw the 2015 nuclear deal’s enforcement, said US financial restrictions have effectively choked off any sort of permissible humanitarian to Iran.

Vali Nasr, a former Obama administration official in the State Department, said that Iran sees Washington’s aid offer as “a few crumbs on the table,” without any change in policy.

Washington’s European allies have also urged the country to loosen its sanctions as countries struggle against the coronavirus pandemic.

This report was republished without any changes from TNA under a CC BY 4.0 license.