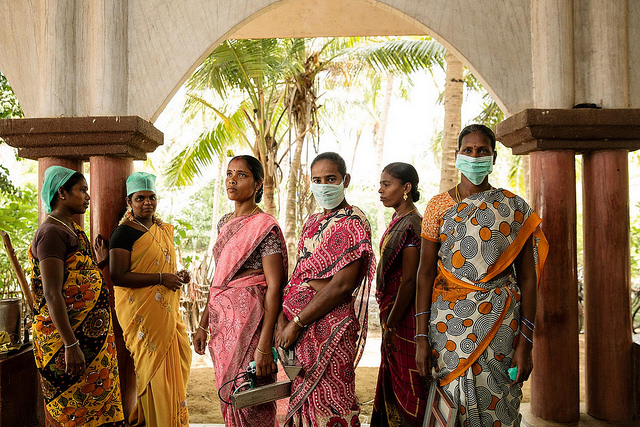 In a bid to undertake one of the largest tax reforms in the country, the Government of India successfully passed the required legislation for the Goods and Services Tax (GST) this year – a uniform tax structure that replaces the existing Value Added Tax (VAT) regime by subsuming a majority of the central and state level taxes.

To finalise the modalities of the tax reform, the government constituted a GST Council as a federal body, as announced under the budgetary provisions for FY 2017-18. The council has been mandated with the powers to decide on the rates of taxation for various items and services produced and traded across the country, and are categorised under five tax slabs of zero, 5, 12, 18 and 28 percent.

In its recent decision, the GST council has proposed a 12% tax bracket on “sanitary towels, sanitary napkins, and tampons” – all need-based menstrual hygiene products. However, items such as sindoor/kumkum (vermilion) – considered essential to the ‘identity’ of a married Hindu woman and bangles – have been fully exempted.

That, items associated with a specific cultural tradition have been kept out of the purview of taxation while products such as sanitary napkins (associated with the traditionally tabooised phenomenon of menstruation) are being taxed at significantly high rates, merits a serious review of the manner in which women-oriented policies are framed in India.

Months before the GST council announced the tax rates on various items, Sushmita Devi, a Member of Parliament had initiated a dedicated campaign demanding the removal of taxes on sanitary napkins. By the time the tax rates were announced, her petition already received close to 65,000 signatories. Prior to Ms. Devi’s campaign, Trisha Shetty, founder of SheSays, an NGO working on the issue of women’s rights in India, had tied up with the Global Citizen India foundation, in 2016, to petition for tax-free sanitary napkins. These were among the few prominent voices on the issue who laid bare the apathy of India’s economic policies towards menstruation. But, evidently, little heed was paid to their concerns by the GST council.

Clearly, this government feels that it is perfectly alright to tax the menstruating women for a phenomenon which is perfectly natural to their being, while exempting ‘culturally approved ways of life’ from taxation. One is almost immediately led to wonder whether this was a mere policy miss or a deliberate act.

No Panel for Women

A cursory glance at the composition of the GST council reveals that the gender ratio in the 32 member council, headed by union Finance Minister Arun Jaitley and comprising of state finance ministers, is highly skewed. Out of 32, the council has only one female member and 31 male members. For a powerful federal body delegated with the authority to make policies for a nation of 1.25 billion people, it is indeed surprising that almost half of the target population finds little or no representation in it.

GST rate list: 12% tax on sanitary napkins and tampons, but no tax on items like bindis and sindoor https://t.co/0aNY9cJtMh pic.twitter.com/SRd55o0Xfa

As an unfortunate consequence, the GST council has come up with taxation policies which are not are highly unsympathetic to the concerns of the minority gender in the panel. That the government was not mindful of the impact of an all-male council on the economic policies of the country is reflective of the general apathy in the policy-making circles towards the issue of women participation, gender equity, and the necessity of gender based budgeting. It also reflects the nature of gender-related policies in India, which are mostly exclusionary, adversely non-incorporative, and in many cases, fail to recognise specific policy needs. An observation in this regard, made by the United Nations Development Fund for Women (UNIFEM), noted that in India, the socio-economic policies and institutions including the budgetary provisions and the trade regimes still fail to give a due consideration to the issue of gender disparities.

Exemplative of the observations, this case highlights how the macroeconomics of centre-state relations has evidently trumped the micro-economics of a gender-balanced panel. The reformation of tax structures underlines how the mindset of decision-makers shapes the socio-political economy of the country. The manipulation of economic policies to usher in a socio-cultural re-engineering has made itself strongly evident in the case of GST decisions. The 12% is essentially the price that a menstruating woman is paying for simply being a woman. That she does not have a choice or a say in this matter, has been completely dismissed by the policy-makers.

Some figures are helpful in revealing the condition of menstruating women in India. One report puts the figure of menstruating women in India without any access to sanitary products during their periods at a staggering 88%, as a consequence of which they end up using unsafe and unhygienic alternatives such as rags, husk, ash and sand. As a result almost 23% of girls drop out of school when they start menstruating. Besides, the lack of access to hygienic sanitary products including napkins and ‘environment-friendly cups’ is responsible for 70% of reproductive diseases In India.

A major obstacle to the use of such products is their affordability. Sanitary napkins are priced between Rs 10 and 15 per pad, which adds up to anywhere between Rs 100-150 as the ‘cost’ for one cycle. Menstrual cups which are introduced as the new age alternative to sanitary napkins are priced around Rs 400-600, but are not commonly available. Under the previous tax structure, the VAT on such products ranged between 10-14.5 percent for different states. In the new tax regime, the tax burden has been pegged at a constant rate of 12%. Given the socio-economic importance of good sanitation practices, women’s reproductive health and related issues such as literacy and other social freedoms, it should have been the primary responsibility of the government to target a 100% access to sanitary products, making them both affordable and easily available.

Policies that promote safe sanitary practices among menstruating women are also critically important in eliminating the taboo associated with the phenomenon and the practice. The existing restraints with menstrual hygiene have a lot to do with the fact that there is general reluctance in holding a public discussion on menstruation. Even within families, menstruating women are subjected to discriminatory practices that are rooted in traditional beliefs, and are expected to suffer in silence. One simple economic policy could have signalled a radical social shift for the society, at least at the institutional level. It could have provided an appropriate rationale for de-tabooising the phenomenon, more so because the entire GST agenda has already received much traction in the public discourse. But, unfortunately, we are yet to see this happen in India.

To put the use of sindoor and bangles, a practice which is usually based on individual choice, over the use of sanitary pads – hardly a matter of choice – falls in line with the concept of ‘developmental hindutva’, an economic ideology propagated by the BJP government, which also encompasses wide-ranging cultural objectives. Feminism has often clashed with the hindutva ideology in latent yet decisive ways: emphasis on women’s right over their bodies, their quest for equal participation in traditionally patriarchal spaces (including marriages and families), and their push for greater role in socio-economic activities, often come at loggerheads with the rigid, top-down social structures under the Hindu belief system. The process of reformation and codification of Hindu personal laws through the introduction of the Hindu code bills, the fight over the right of menstruating women to enter temples, or the demand for an inclusion of marital rape as a criminal offence under section 375 of the Indian Penal Code (IPC) are reflective of this ideological clash.

For those making the argument that the decision has nothing to do with ideology, it becomes important to point out that every economic decision made by the policy-makers of a country hinges on a socially-derived rationale and is therefore both social and political in nature. To argue that economics of the decision should be put over its ethical, social and moral implications is to argue that the ultimate end of governance should not be the amelioration of human condition but the maximisation of economic profits for narrow, vested interests.

Besides, the idea that women’s reproductive health has no implications for the economy is a grossly short-sighted argument. With women forming the backbone of an economy supporting both paid and unpaid labour, entrusted with the additional responsibilities of household and childcare, the notion that their health concerns can be sidelined or overlooked for greater good of greater numbers is both misguided and entrenched in blissful ignorance.

The promotion of discriminatory and exclusionary policies by the ruling government helps in promoting and subsequently normalizing an otherwise regressive mindset. While the jargon on national television on the government’s concerns for women’s rights might suggest otherwise, the policy proposals being passed by the parliament merit a closer look at what is being promised and what is being delivered. While the push for more inclusive, and gender sensitive policies will come from the bottom, the mindset at the top is suggestive of a general apathy towards such concerns.

The broader idea being: If you can’t beat them, tax them!

Niharika Tagotra is a Researcher at the Institute of Peace and Conflict Studies, New Delhi, and currently looks into India’s nuclear energy policies. She is also pursuing M.Phil from The Centre for International Politics, Organisation and Disarmament at Jawaharlal Nehru University, New Delhi.