There are many ways to remember a protest. Although fundamentally ephemeral, a protest leaves its assembly with memories, vocabularies, and visions of alternative politics. As the Not In My Name protest concluded at Jantar Mantar, besides 16 other cities where it found belongingness, one is compelled to take memory and ephemerality together to remember this time only months ago when azaadi (freedom) became the euphemism of radical futures.

The matter with protests is not only their ephemerality but their resonant hope of using the precarity of lives to create a public – if the public so created transforms precarity, it also transforms its subjects. The other matter with protests, however, is that they do not change us. We remain the same individuals even after the force of protest, just as we were before we gathered. In desiring the annihilation of structures that make us, we fear being annihilated ourselves. This is why both azaadi and Not in My Name appear to many in many guises. For the hopeful, it is an aborted revolution. For the critical, it is perfunctory resistance.

The figurative call of Not in My Name came under similar attack, for its psychic dispassion, its comfortable politics, its incomplete sense of disavowal. But as hundreds, if not thousands, of people reached Jantar Mantar on Wednesday, the public and the counterpublic became one. This is another matter with protests. We will disagree, but we will dream.

The initial modus of the ‘protest’ was to be a silent one. Just enough to mark solidarity, it was argued, but to do nothing that unsettles. The call to silence in a protest that critiqued silence faltered promptly as music became the fulcrum of the protest, a palpable presence from encountering the gathering to dispersing towards the end. The rambunctious character of the protest was interrupted only for moments when a conscious silence was observed to mourn, before organiser and filmmaker Saba Dewan introduced the protest to the gathering. In her brief address, Dewan spoke of crying when she heard about Junaid, of being unable to sleep in the shadow of such a tragedy.

Although she also spoke of the need to protest, our positions as the citizenry of an egalitarian Constitution, and the incessant threatening that Junaid’s family has had to sustain for the mere act of speaking, the resonance was in her grief as she created a personhood for Junaid – he is someone who could be my son, he is someone who is our son. That she preferred first to grieve and then to rage spoke to those of us who gathered in protest to mourn the murder of a person beyond narratives of lynching, fascism, and suchlike. She remembered Junaid as a person who could be hers, not only as a headline of primetime television. That this is difficult and profoundly significant work dissipated in the energy of poetry and protest, reappearing only when an individual from Junaid’s village, Khandawali, recited a poem in Junaid’s memory, weeping frequently while doing so. I wish such expression were not so ephemeral, as I do for the protest.

If the expression of grief is difficult work, crafting a collective in the protest is the labour of the dissuaded. Yet, the performance of poetry accomplished this impossibility. Gauhar Raza, Padmavati Dua, Akhil Katyal, Sabika Abbas Naqvi, Prakhar Kumar, Rabbi Shergill, Vinod Dua, and Maya Rao drew on a galaxy of the rebellious – Faiz Ahmad Faiz, Sahir Ludhianvi, and others to attempt their own. In music, stories, dance, satire, poetry, and art, there was a rejection of the nefariousness of a political world and one’s identification to its modalities, its ideas of community, of who is allowed to be ours and who cannot be. The assembly of this rejection cradled all political groupings, and to that end, transcended their hollow solidarities.

I spoke to a professed fan of the BJP who claimed to have voted so in 2014 and intended to repeat it in two years. He was appalled that their commitment to development could accommodate the tragedies of lynching; he saw his participation in the protest as against the silence of his kind, while refusing to collude with those who are now anti-national. That the protest did not make him feel unwelcome or make itself coherent to parlances of organisation is testimony to its wide-ranging impression. Such a vision of resistance in our vitiated times is a vision of courage, possible only towards the intelligible and for those whose conception of the public does not make unconditional ideological agreement requisite.

It is this idea of the democratic that informs our celebration of Prime Minister Narendra Modi’s timely condemnation of murder in the name of the cow precisely a day after the protest, but it is also this that should be the impediment of our apparent triumph. Power may concede nothing without struggle, but struggles, like protests, are fleeting in their performance, even if not in their purpose. To make what is said celebration, laudable as it may indeed be, should tell us how little we do and how little changes. The final matter with protests is that in coming together, the public creates a political being greater than itself – a conception of the radical that may seem to dissipate in momentary dispersal, but can never otherwise be diffused, almost an elemental force to be gathered in gatherings.

It is the nervous energy of protests, the grief that injustice does to us, the indignation that you can never express sufficiently, and the unwilling togetherness that the loneliness of precarity forces on us. In the life of this inexplicable political being is the life of a democracy – a protest that does not cling to its sustenance with a kind of passion that only the will of power can rival fails its public, their precarity, and the psyche of democracy.

This article was first published in Firstpost on 29 June 2017, under the title “#NotInMyName protests: A convergence of poetics and politics at Jantar Mantar“, and has been reproduced here with permission. 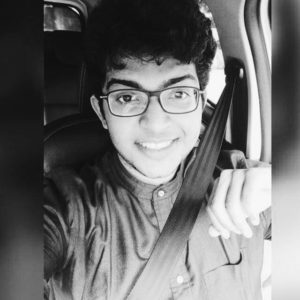 Kartik Maini is an undergraduate student of history in St. Stephen’s College, University of Delhi. He is interested in ancient history, contemporary politics, and writing.