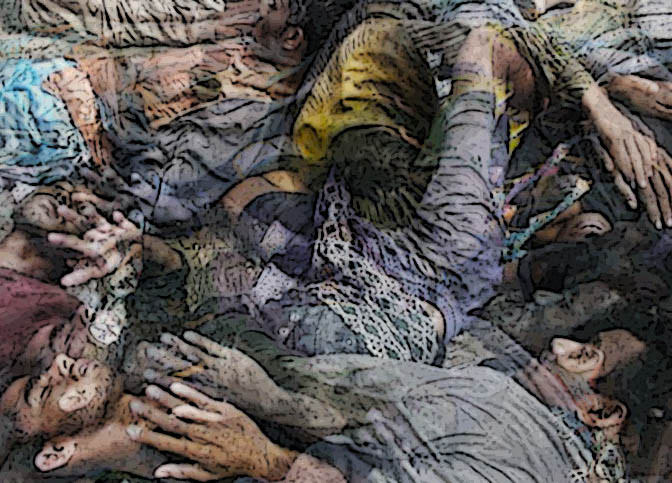 On 15 November, the Bangladesh Border Guards (BGB), at the seventh central level meeting between border security forces of Myanmar and Bangladesh, urged the government of Myanmar to repatriate the 600,000 Rohingyas who have recently fled into southeastern Bangladesh in the aftermath of the aggravated violence in Northern Rakhine.

Ever since the fresh exodus reached an unprecedented peak sometime in mid-September, the Sheikh Hasina government has been constantly hammering the point of repatriation across to Myanmar, both at home, bilateral level, and at multilateral forums like the United Nations General Assembly and the recently-concluded Commonwealth Parliamentary Conference in Dhaka.

[…] over the past four decades, the Rohingya community has remained largely invisible as far as Myanmar’s social and political mainstream is concerned.

This is understandable given the lofty economic, social, and environmental costs of hosting close to 800,000 (including figures of pre-existing refugees) refugees in a country that falls in the lower middle-income slab.

Myanmar too has reciprocated in its own politically measured tone by stating that it would certainly take back the Rohingyas, but only according to the 1993 rules of bilateral repatriation and in line with its ‘national verification process’.

At the outset, it does seem like both Dhaka and Naypyidaw are serious about undertaking corrective measures to reverse the unprecedented humanitarian crisis. But, on closer scrutiny, the current framework of resolution appears deeply problematic and rather, unsustainable.

The Rush to Repatriate

Over the past three months, the discourse around the Rohingyas has rapidly titled from humanitarian relief and rehabilitation to repatriation. Early October, Dhaka and Naypyidaw reached consensus on a certain 10-point agreement over the refugee situation, ostensibly guaranteeing “repatriation of refugees at the earliest date”.

Thereafter, Myanmar announced that it is already in the process of signing a memorandum of understanding with Bangladesh, post which, according to State Counsellor Aung San Suu Kyi, the repatriation process would be completed within three weeks.

Clearly, both the countries seem to be in a rush to repatriate the Rohingyas. This is despite the continued influx of refugees into Bangladesh and the lingering insecurity on the ground in ground zero ie Northern Rakhine.

[…] even if safety and voluntarism are ensured, can a Rohingya refugee ever be truly repatriated? Myanmar’s institutional subversion of the Rohingya identity impedes any sustainability in this process.

On 10 November itself, according to a Reuters report, around 750 Rohingyas made their way across the Naf river using flimsy boats and rafts and reached Teknaf in Bangladesh’s Cox’s Bazar district. Some of them recounted tales of continued attacks by Buddhist extremists back home and desperate Rohingyas waiting to flee. Moreover, if local Rohingya community media is to be believed, then the situation on the ground in Myanmar continues to remain dismal with widespread arson and arbitrary killings still on.

In such a situation, sending half a million refugees back to Northern Rakhine would be compounding the crisis and perhaps even, firing up a fresh cycle of violence. In other words, it would be no less than throwing a large set of vulnerable people from the pot into the fire. There also seems to be no way of verifying the nature of the security situation in and around Maungdaw, Buthidaung, and Rathedaung – from where most of the refugees originated – given the near-total lockdown currently in place in Northern Rakhine.

What would ‘repatriation’ even mean in this case then? Theoretically, it denotes the voluntary, safe, and sustainable return of refugees to their countries of origin, as enshrined in various international instruments, most prominently the 1951 UN Convention on the Status of Refugees. But, if the Rohingyas currently in Bangladesh are to be sent back, the conditions of return would hardly fall fit with the established mandate: there is neither any guarantee of safety nor any attestation of solid voluntarism.

However, even if safety and voluntarism are ensured, can a Rohingya refugee ever be truly repatriated? Myanmar’s institutional subversion of the Rohingya identity impedes any sustainability in this process.

For the stateless Rohingya, there is almost no legal reference point to look to, in terms of ‘returning’. Without full political reintegration into Myanmar’s mainstream, repatriation would be reduced to an oft-repeated process of sending a lump of bodies back to where they came from.

The tragedy of the Rohingya condition lies in the obscurity of their collective existence. As pointed out by the recently-released report of the Kofi Annan-led Advisory Commission on Rakhine State, “the majority of Muslims in Rakhine” were left stateless after 1982 when they were forced to surrender their existing citizenship cards, in exchange for no alternative document in return as promised by the government.

For the stateless Rohingya, there is almost no legal reference point to look to, in terms of ‘returning’.

The military administration did begin issuing Temporary Residency Cards (TRCs) to Rohingyas in 1995. But, the Thein Sein government invalidated those as well in 2015, just prior to the national elections. Since then, the government has been forcing the Rohingyas living in Northern Rakhine to accept what is known as ‘National Verification Cards’ (NVCs) – a temporary ID given to foreigners who take up Burmese quasi-citizenship for two years without full civil and political rights.

The one common feature in these special cards is the non-recognition of the ‘Rohingya’ label and its replacement by the ‘Bengali’ tag. The immediate meaning implicit in this is the forced denial of the existence of an entire community through legal means, by systematically and sustainably subverting the very core of the ‘Rohingya identity’.

Further, the 1993 agreement, which as Suu Kyi stated in her 19 September diplomatic address, is Naypyidaw’s preferred framework for repatriation, was premised on the controversial citizenship verification norms that the erstwhile military government established pursuant to the 1982 citizenship law. These norms operate along express racial parameters, wherein by-birth citizenship is granted to only the “national ethnic races” of the country – a loose set of ethnicities that does not include the Rohingyas.

The alternative ‘naturalised citizen’ category too is manifestly discriminatory against the Rohingyas: it demands certain qualifications – like the ability to speak one of the national languages well – that make it impossible for a large section of the Muslim minority (who speak a non-scheduled Arakanese dialect) to gain and sustain its citizenship.

[…] pro-military and nationalist quarters in Myanmar have been coercively excluding the Rohingya from the Burmese sociopolitical mainstream since a long time now through a mix of subtle institutional measures – like keeping them in camps and creating structural conditions for deprivation – and abrasive rhetoric.

Hence, over the past four decades, the Rohingya community has remained largely invisible as far as Myanmar’s social and political mainstream is concerned.

This is not really an organic kind of invisibility, but one that was imposed through institutional coercion. The Suu Kyi administration, by harking back to the 1993 agreement rules of verification for repatriation, simply wants to preserve this toxic state practice, and in turn, the overwhelming invisibility of the community.

Add to this the longstanding anti-Rohingya pathologies of the Myanmar military and its political affiliates and allies, like the erstwhile ruling party, Union Solidarity and Development Party (USDP), and the Rakhine State’s ruling party Arakan National Party (ANP). Recently, Snr Gen Hlaing Ming – the Tatmadaw’s commander-in-chief – wrote on his Facebook page that Rohingyas will be accepted back only when the “real Myanmar citizens” (read: Rakhine Buddhists) accept the process.

A senior USDP member also recently stated that the party would closely monitor the repatriation and verification process, urging the government to be “particularly careful of facts that can be harmful to the sovereignty and national interests.”

Thus, the pro-military and nationalist quarters in Myanmar have been coercively excluding the Rohingya from the Burmese sociopolitical mainstream since a long time now through a mix of subtle institutional measures – like keeping them in camps and creating structural conditions for deprivation – and abrasive rhetoric. These tendencies still exist in full measure and now seem to come in the way of any true ‘Rohingya repatriation’ that could be.

Truth is that entitlement of full citizenship rights remains a long shot for the Rohingyas, given the extraordinary sociopolitical sensitivities around the issue and the continued dominance of the military’s nationalistic agenda within public discourse. Under such harrowing circumstances, one is ultimately compelled to wonder as to where does the Rohingya even return to, if at all. Perhaps to a homeland that does not even exist.

This article originally appeared in Firstpost on 20 November 2017 under the title ‘Myanmar’s institutional subversion of the Rohingya identity makes repatriation problematic.’