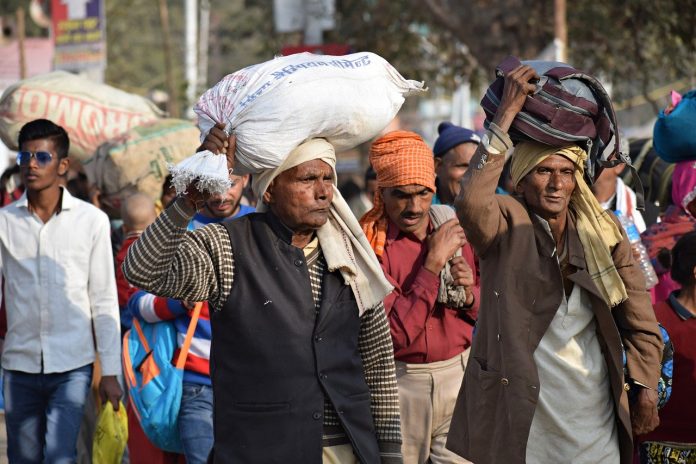 The recent announcement of a six-day lockdown by the Delhi Government on 19 April immediately triggered an exodus of migrants from Delhi to their native states.

The thronging of people at bus terminals and railway stations in Delhi on 20 April right after the announcement of lockdown by Chief Minister Arvind Kejriwal brought back painful memories of last year’s migrant worker exodus that followed the union government’s declaration of a complete nationwide lockdown on 23 March 2020. Back then, thousands were seen heading for their native places, many walking barefoot on highways and along railway tracks, due to an abrupt loss of livelihood, desperation and hopelessness owing to their status as informal workers.

A similar situation is visible with the current exodus of migrant workers where thousands of workers lined up for public transport with their families, including children, as they could not afford to bear the brunt of livelihood loss all over again. Some of them reported that they would never like to come back again as there is so much uncertainty.

The informal sector workers, particularly those working in certain sectors, have been worst affected due to lockdowns induced by the COVID-19 pandemic. A rapid assessment conducted by the International Labour Organisation (ILO) in June 2020 had reported that sectors like wholesale and retail, manufacturing, construction, transport and agriculture were worst affected due to closure of economic activity. Many of these sectors are small and micro enterprises with limited access to social security.

Another study conducted by Azim Premji University in 2020, based on a rapid assessment survey on the impact of COVID-19 on households, had revealed that around 92 percent of migrant workers from the surveyed population were consuming less food than before and 70 percent of migrant households did not get ration cards.

Such surveys are a testimony to the enduring migrant crisis and increasing vulnerability of migrant workers in India. Is the state apathetic to these problems? Is there a much greater role that the state needs to play in terms of public policy on migrant workers?

The government had initiated several emergency measures to tackle the situation, such as the Garib Kalyan Rozgar Abhiyan launched by the Ministry of Rural Development on 20 June 2020 to boost employment and livelihood opportunities and skill mapping for migrants who had moved to their home villages. Under this scheme, Rs 27.21 crore worth of employment was provided.

Financial packages under the Atmanirbhar Bharat Scheme aimed to create employment opportunities as well. The Ministry of Labour and Employment had provided advisory guidelines to State governments for the welfare of migrant workers returning to destination states during the crisis. Further, 20 new control rooms have been established by the Labour Ministry in April 2021 to mitigate the problems of migrant workers through co-ordination with State governments under the leadership of the Chief Labour Commissioner (Central).

But the concern that arises here is – how far such approaches contribute in ensuring job security, health security, dignity at work and access to social protection for migrant workers? Are there any emergency responses for dealing with health emergencies and assessment mechanisms?

The need to revisit the list of occupational diseases and include those caused by virus and bacteria was informed in one of the ILO reports on COVID-19 in 2020. The report suggested that there is a need to consider COVID-19 infection as work or employment injury if contracted as a result of work and workers need to be provided with adequate health care and compensation.

The inclusion of migrant workers in the new OSHWC Code 2020 opens several possibilities to revise the present list of 29 occupational diseases and include diseases caused by virus and bacteria (such as COVID-19) at workplaces.

The last nationwide survey on migration was carried out by the National Sample Survey Office, Ministry of Statistics and Programme Implementation, in 2008. Since then, there has been no updated database on migrant workers. The Office of the Chief Labour Commissioner in New Delhi had issued a letter on 18 April 2020 to the Regional Labour Commissioners to provide data on migrant workers in co-ordination with States from relief camps and shelter homes, employers whose workers were working on the sites, and local areas where migrants were generally clustered.

Notwithstanding such efforts, there is a need to evolve a long-term strategy for better collection of statistics. India’s commitment to the global Sustainable Development Goals (SDG), particularly Target 8.8 on protecting labour rights and promoting safe and secure working environment for all workers, including migrant workers, in particular women, and those in precarious employment, requires a concerted policy action.

Furthermore, rapid assessment surveys on migrant workers with an emphasis on mitigation of occupational risks based on discussions with relevant stakeholders is extremely essential. Such rapid assessment surveys by several organisations have uncovered the agonies of informal sector workers during the lockdowns imposed in the country. Some of the studies have also reflected on the gendered vulnerabilities of migration, like in the case of domestic workers who were inter-state migrant workers and were less likely to have access to social security.

A study conducted by the Indian Social Studies Trust in 2021 had uncovered the plight of informal women workers, including migrant workers, who had lost their livelihoods and faced innumerable challenges, including mental stress caused due to COVID-19. A study conducted by WIEGO in November 2020 on migrant domestic workers in Delhi highlighted issues of low wages, lack of leave, lack of access to occupational safety and health, stigmatisation, discrimination and violence and harassment as major challenges faced by women migrant workers. There is no denying that the pandemic has disproportionately affected women migrants and exacerbated their pre-existing vulnerabilities.

Also, lockdown measures have been more traumatic for migrant workers as most of them are informal workers. These workers get severely affected – economically, socially and psychologically – due to sudden announcements of lockdown measures and lack of measures on employment protection. The risk assessment due to lockdowns and preparedness with adequate policy intervention becomes critical to protecting the well-being of migrant workers in line with SDG Target 8.8.

With the resurgence of COVID-19 in the form of a more vicious second wave and its adverse impact on migrant workers in India, the need for a long-term migration policy is extremely essential. This includes an assessment of the overall socio-economic situation of migrant workers with an understanding of the impact of the pandemic on their work.

The psycho-social impact of the pandemic and associated incidents of discrimination on migrant workers while returning to their villages need to be analysed through proper co-ordination with the States. Such an effort will not only provide a deeper understanding of the situation, but also enable policy formulation towards providing psycho-social support to migrant workers.

A sector-specific policy for migrant workers with boost to employment, skilling and social protection in sectors hit by COVID-19 is essential. The launch of the All India Migrant Workers Survey by the Ministry of Labour and Employment last month is a significant step towards procuring data on migrant workers. The survey would provide an insight into the socio-economic and working conditions of the migrant workers and also assess the impact of COVID-19 on migrant workers in India.

Although the survey would highlight several issues pertaining to the lives of migrant workers, the regularity of such surveys is extremely important, not only to understand the trends on migration, but also to assess the challenges in the labour market due to the pandemic situation for a better-informed policy formulation in this direction. Further, the gendered vulnerabilities associated with women migrants need to be identified through such surveys, analysed and protected through legal and social protection policies.

Featured image: Migrant workers outside New Delhi leave for their hometowns during the first wave of the COVID-19 pandemic in India in 2020 | Image by Rajesh Balouria from Pixabay

is a Fellow at the V. V. Giri National Labour Institute, Noida. She has a PhD in Sociology from Jawaharlal Nehru University, New Delhi, and works extensively in the field of gender and labour issues, international labour standards, labour regulations and child labour. She can be contacted at ellinasamantroy@gmail.com.