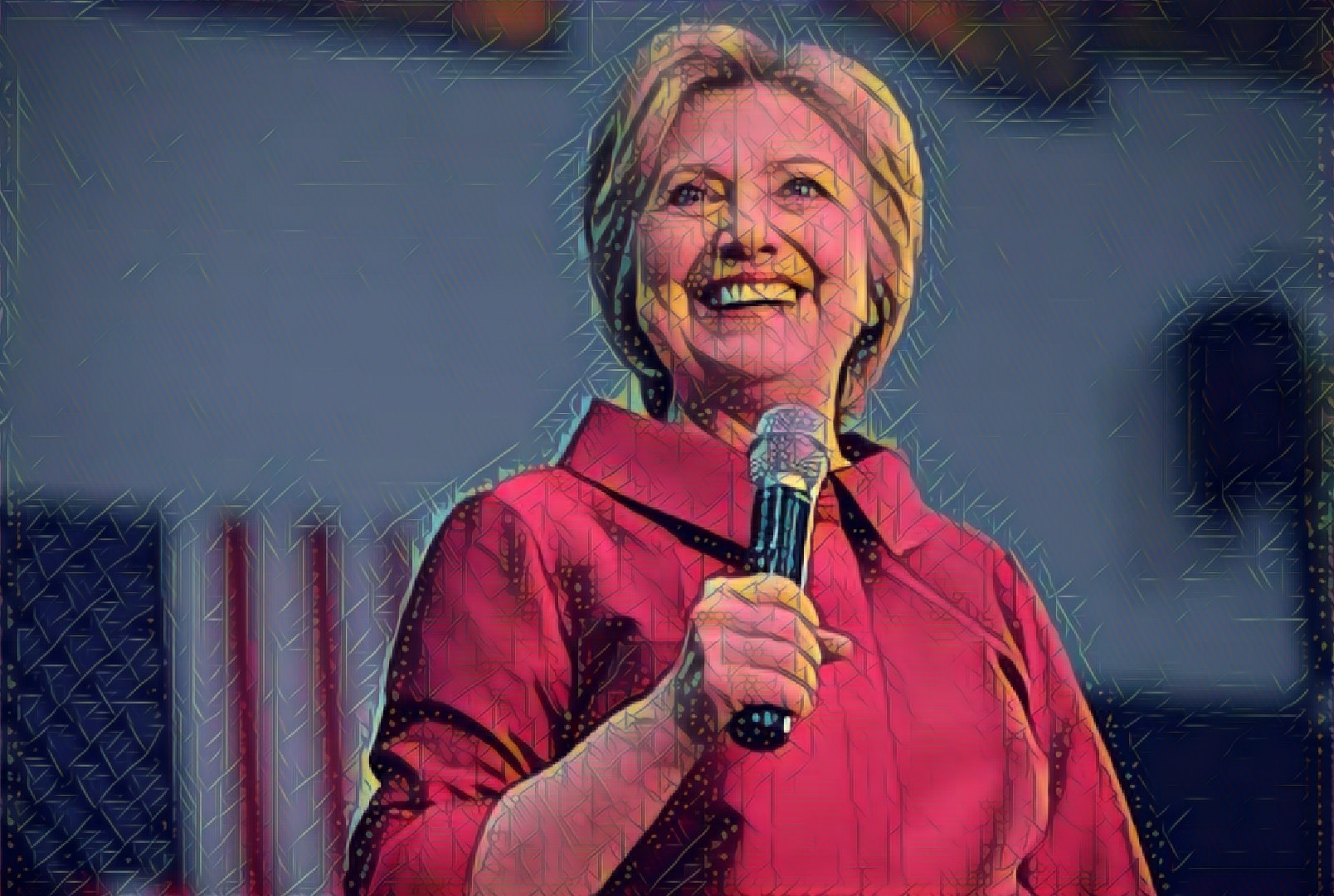 It has now been some time since multiple allegations of sexual harassment and rape came out against Hollywood mega-producer Harvey Weinstein, with most politicians, journalists and celebrities expressing shock and disgust.

His proximity to Democratic Party elites shines a light on how some leading feminist politicians, most notably Hillary Clinton, have been counterproductive to the cause of feminism, gender justice, sexual freedom and eradicating sexual harassment.

An interesting point to note is how it took nearly four days for Democrats, including Hillary Clinton and former President Barack Obama, to react on the issue.

After denouncing Weinstein in a few sentences, Hillary used the occasion to speak against Trump and harassers in general, rather than ask women in her own party to speak up about sexism or harassment they may have faced within the party, or escalate the issue nationwide. This contradiction continued in her later social media posts.

It is indeed impossible to fathom how Hillary can jump on the #MeToo train (which she did) – without standing with Bill Clinton’s accusers, all of whom gave detailed accounts and none of whom are anonymous.

Why did the delay occur? Political proximity

Weinstein has personally donated $1.3 million since 2000 to Democrats, including $300,000 to the Democratic National Committee (DNC). In addition, he donated a similar total sum of $300,000 to the Clinton Foundation. Records show that he was a top-tier donor and bundler for Hillary Clinton’s campaign, including the 2008 primary against Obama. Being a bundler meant procuring exponentially higher amounts of money every election cycle, making him a major financial asset. Progressive ‘champions,’ Senators Elizabeth Warren, Al Franken, Cory Booker, and Kirsten Gillibrand have all been beneficiaries of his donations, as have centrists such as Senators Chuck Schumer, Martin Heinrich, Patrick Leahy, and Richard Blumenthal.

Many Democrats have attempted to wash their hands off the matter by donating similar amounts as they had received, to ‘charitable’ causes. The DNC followed suit but like many candidates, it handed the money to political organisations such as Emily’s List, which finances the same candidates that the DNC endorses and finances. In short, the dirty money was funneled back into the same purposes. The Clinton Foundation, on the other hand, did nothing — it claimed it has already spent that money on charitable activities. The original sin remains — wining, dining and gladly taking money from a person who was a known harasser in elite circles.

Emails show that he frequently sought and was granted meetings with Hillary Clinton, and was on friendly enough terms to recommend her movies and share opinions on trivial matters. He also willingly used Clinton talking points and attack lines in the 2008 and 2016 primaries. One email shows his alarm at Bernie Sanders’ growing popularity among African-American and Latino youth, suggesting to smear him by linking one of his senate votes to the Sandy Hook issue. In interviews, he suggested that Sanders was unqualified for the post of President and that he was deluding voters.

As recently as July, he met with prospective Democratic establishment candidate for President in 2020 Kamala Harris. One of Barack Obama’s daughters, Malia, interned with him in 2017, a few months after Barack Obama left office.

Historically, Clinton acted as both an enabler and apologist for the system that oppressed countless women for decades.

The Crime Bill that the Clintons campaigned for and got passed in the 1990s led to extremely high levels of criminal incarceration, disproportionately affecting minorities and devastating countless of families from communities of color. Last year, Hillary refused to condemn Chicago mayor Rahm Emmanuel for not resigning in the aftermath of mayoral interference in the Laquan McDonald shooting case or for shutting down schools in Chicago’s poorer and more minority-inhabited districts.

Welfare Reform, which Hillary campaigned for in the ’90s, led to the removal of single and divorced mothers from Social Security, something the Children’s Defence Fund disowned her for (Hillary’s work with them form her only credentials of having “worked for women and children,” as she often touted during her 2008 and 2016 campaigns).

The 1996 Clinton Defense of Marriage Act derecognised and postponed LGBTQIA rights by nearly two decades until Obama and the Supreme Court obliged the queer community. The bottom line is — if you do not stand up for the rights of lesbian, bisexual and transgender women — you are not a feminist at all.

More recently, the moment the results were out, Hillary appropriated the victories of Democrats in the various state elections that occurred a few weeks ago, even though she had spent most of the past year promoting her last book What Happened, and her group Onwards Together had done little to help most of the victorious transgender candidates in the primaries (for whom so many feminists and progressive groups had fought for).

Further, one cannot actively push for the bombing of civilian populations as Secretary of State, denying immigration to children from Haiti and Honduras — and go on to claim to be a champion of women’s and children’s rights.

Gender issues today are intersectional but the delegates from the Clinton camp voted against a $15 minimum wage with future cost of living adjustments, against a blanket ban on fracking, against free public healthcare (single-payer), against free tuition in public colleges and universities, against the pipelines that displaced thousands of families — when the time came for drafting the Party Platform for the 2016 election.

The era of taking minority and women voters for granted is over, and the current Democratic leadership, both women and men, who often sided against workers, women and minorities under Democratic rule, are unfit for representing the aspirations of most voters.

Hijacking feminism for a presidential campaign

Clinton is guilty of appropriating and monopolising feminism for her personal Presidential campaign for one and a half year, co-opting struggles, getting the Democratic Party coffers reallocated to the Hillary Victory Fund rather than to women’s groups and affiliates, or for local election races. This proved tactically disastrous.

Instead of focusing on protecting women’s rights in each state and ensuring no regressive candidates at the local level are able to erode the gains made over the decades by women, it became a one-seat war against a sexist, racist businessman running for President — which evidently required the money of many more racist, sexist businessmen to wage.

The DNC and the Clinton campaign disenfranchised millions of women in New York, California and other states from voting in the primary. Superdelegate after superdelegate pledged to Clinton before the primary and during the Democratic National Convention despite the polls predicting her loss to Trump in those states. Further, the rigging of the Democratic primary only served to elect Donald Trump. Democrats lost most state and local electoral races too.

The ‘feminist’ campaign proved rather skilled at insulting and disrespecting women voters. Gloria Steinem, already notorious for how she, along with Hillary Clinton, shamed Bill Clinton’s accusers in the 1990s despite the credible evidence they procured, characterised female supporters of Senator Bernie Sanders as backing him simply because the men were. Madeline Albright, during the primary, asked women voters to vote Hillary as there was a “special place in hell for women who don’t help each other.” I have written elsewhere that “there is nothing more regressive or sexist than asking women to vote blindly en masse, not based on individual choice or thinking or the issues, for a female candidate just based on gender”.

Clinton also employed the man who smeared Anita Hill in the 1990s when she accused to-be Supreme Court Justice Clarence Thomas of sexual harassment, David Brock, as the head of her propaganda team, in addition to taking money from SuperPACs run by known misogynists and sexual offenders.

During her campaign, she lined up women accusers of Trump for a press conference, declaring her belief in the principle of supporting complainants in good faith. The same good faith was not displayed in the 1990s when several women came with accusations of sexual harassment and rape against Bill Clinton. Further, since then, neither did Hillary follow up on the issue of Trump’s accusers, nor did she assist the survivors in pursuing legal action against him.

Why did harassers get away with it for so long? Not just industry connections but political connections made men such as Weinstein too powerful for victims to take on individually. Decades-long sexual harassment under political cover is a damning indictment of the complacency in the Democratic Party on gender issues.

Bill Cosby, Donald Trump, Weinstein, Anthony Weiner, Kevin Spacey, Jeffrey Epstein, Howard Gutman, Mel Reynolds are only some of the people who had close proximity to Democratic Party leaders. Many of these were known harassers in their own professional or social circles or donor networks. Some are lawmakers or prospective (or former) lawmakers like Roy Moore, Al Franken and Weiner.

Further, some of the powerful offenders employ tactics previously used in the 1990s by Bill Clinton’s coterie including Hillary, when cases began to spill out. A report states that “The Observer has gained access to a secret hitlist of almost 100 prominent individuals targeted by Harvey Weinstein in an extraordinary attempt to discover what they knew about sexual misconduct claims against him and whether they were intending to go public.” Similar strategies were used by ex-Fox News CEO Roger Ailes.

In many of the accounts coming out today, a common refrain is the survivor being told by a co-worker that “he’s just like that”, as is often being warned about the accused’s ‘tendencies’ beforehand — normalising such behavior and offering only caution. That such ‘tendencies’ are allowed to exist unpunished for years and decades, only to encourage serial offenders — tells us a lot about the scope of knowledge and abetment in elite circles. It happens in the Republican Party (Trump, Roger Ailes, and Bill O’Reilly are just a few examples), and in the Democratic Party as well, though the former never claimed to stand for feminism (only for family values).

A few women are in power in the world today — Hillary was one of the early ones. When those few, who broke the glass ceiling and gave women the first foothold in the corridors of power, end up being “behind the times” (as Clintonian apologists put it) rather than with or ahead of them – the feminist movement and the urgency of gender justice stand betrayed.

Today, the last presidential nominee of the Democratic Party was a woman, as were the last two DNC Chairs, as is the current House Minority Leader, as are the main ‘progressive’ Democrat senators. The main feminists in the party are hardly stepping up. It is indeed difficult to credibly switch sides once the tide has turned the other way when you were an enabler of the previous system. Co-opting feminism and feminists can never be a solution. Outrageous levels of sexual violence still occur in modern society today — the floodgates must be held open by these vanguards for authentic progressive gender rights activists to occupy legislative positions.

This article originally appeared in Firstpost under the title ‘Harvey Weinstein case shows how Hillary Clinton is feminism’s worst nightmare‘.

Saib Bilaval is a PhD Scholar in Modern and Contemporary History at the Centre for Historical Studies, Jawaharlal Nehru University, New Delhi, India.