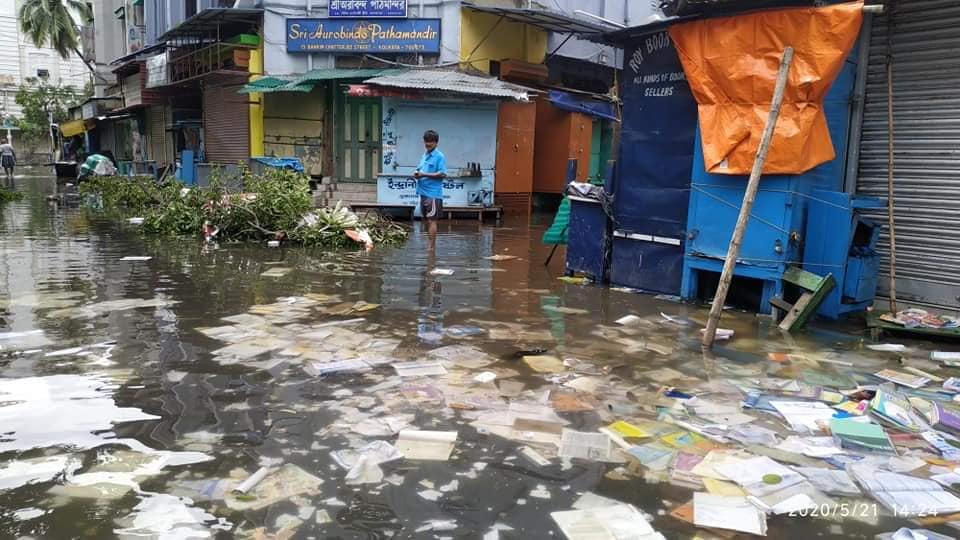 Severe cyclonic storm Amphan’s landfall at Digha in West Bengal on Wednesday has left behind a trail of destruction with at least 72 deaths confirmed by the state’s Chief Minister, Mamata Banerjee, on Thursday. In Bangladesh, there were reports of 16 confirmed deaths.

One of the worst storms over the Bay of Bengal in recent years, Amphan pounded Bengal and Odisha on Wednesday, destroying thousands of houses, damaging buildings, uprooting trees, electricity poles and killing dozens.

Chief Minister Mamata Banerjee said the impact of Amphan was worse than the COVID-19 pandemic and said the damages due to the cyclone could go up to Rs 1 lakh crore. The cyclone, whose eye was about 30 kilometre in diameter, made landfall with gusting winds of up to 185 kmph and waves about 15 feet tall. Over ve lakh people had to take shelters in West Bengal and over one lakh in Odisha.

Chief Minister Banerjee, addressing a press conference in Kolkata on Wednesday, said the number of deaths may rise from the current 12. On Thursday, she confirmed 72 casualties. She said North and South 24 Parganas districts were the worst hit and that Bengal “will have to rebuild everything”.

A man and a woman died in 24 North Parganas after trees fell on them due to the strong winds. In nearby Howrah district, a 13-year-old girl also died when a tree fell on her.

Power supply had been cut in both North and South 24 Parganas. In Calcutta , howling winds – easily above 100 kmph – could be heard throughout Wednesday evening and many buildings were damaged.

Parts of the city plunged into darkness with no electricity for most of the evening. The streets were waterlogged and trees uprooted. There was no power and no internet at the time of writing this report in most parts of Calcutta.

Videos on social media showed how parked cars bumped into each other at a south Calcutta highrise, trees ripped out of the ground, and a blast in an electrical transformer.

Amphan crossed the Bengal-Bangladesh coasts on Wednesday evening with the speed of 155-160 kmph gusting to 185 kmph across the Sunderbans, the Met department said.

National Disaster Response Force (NDRF) chief SN Pradhan said the storm is “a double challenge” for the country amid the fight against coronavirus.

“Forty-one teams of NDRF are on duty. Evacuating people is a double challenge. We have to ensure social distancing during these operations,” Mr Pradhan told mediapersons.

In Kolkata, the airport has been shut till 5 pm Thursday after the city, close to the coast, was put on alert.

Visuals showed strong winds and winds battering coastal parts including Paradip in Odisha and South 24 Paraganas in Bengal. Seven districts in Bengal faced the direct impact of the cyclone.

Amphan, pronounced as “Um-pun”, means sky. The name was given by Thailand in 2004, years ago. The storm is being constantly tracked by Doppler Weather Radar at Vishakhapatnam.

Two women were killed in Howrah district and Minakhan area of North 24 Parganas district due to uprooting of trees, an official said. A third death was later reported from North 24 Parganas. The landfall continued for four hours, with heavy rain and triggering three-five metres of tidal waves, the MeT department said. In Calcutta, high rise buildings shook as winds battered the city.

At least 6.58 lakh people were evacuated in West Bengal and Odisha before the cyclone struck. NDRF said that 20 teams of the federal disaster response force had already begun road clearing operations in Odisha, while the 19 units deployed in West Bengal were shifting people to safety.

In Bangladesh, officials on Wednesday evening confirmed 16 deaths, including a five-year-old boy and a 75-year-old man, both hit by falling trees, and a cyclone emergency volunteer who was drowned.

In Bangladesh, at least sixteen people were reported dead until Wednesday night in Patuakhali, Satkhira, Pirojpur, Bhola and Barguna as Cyclone Amphan.

Fierce winds up to 160 kph ravaged the coastal districts, reminding many old timers of the 1970 super cyclone that killed millions.

Among the confirmed fatalities reported, a woman died in Satkhira when ferocious winds brought a tree crushing down on her, according to local Awami League leader Ajay Sarkar.

He said the wind gusts led to several wall collapses while a boat of volunteers sank leading to the deaths.

By late Tuesday, “super cyclone” Amphan had slightly weakened and was reclassified as “an extremely severe cyclonic storm”. Still, by Wednesday evening, it was wreaking havoc over the vast stretches of Bangladesh, West Bengal and Odisha, flattening fragile dwellings, swamping homes, bringing heavy showers, snapping utility poles and wires and knocking down trees.

In Bangladesh, authorities had shifted around 2.4 million people to more than 15,000 storm shelters this week. Officials also said they had moved hundreds of Rohingya refugees from Myanmar, living on a flood-prone island in the Bay of Bengal, to shelter.

But officials said they feared that standing crops could be damaged and large tracts of fertile land in the densely-populated country washed away.

“Fortunately, the harvesting of the rice crop has almost been completed. Still it could leave a trail of destruction,” Mizanur Rahman Khan, a senior official in the Bangladesh agriculture ministry, told Reuters.

Fierce wind gusts and rains snapped power supply, plunging much of the coastal zone in Bangladesh into darkness on Wednesday.

More than one million consumers in at least 17 associations of the Rural Electrification Board have lost electricity. Apart from this, almost 40,000 customers of West Zone Power Distribution Company have been left with no electricity supply.

Cyclones frequently batter parts of eastern India and Bangladesh between April and December, often forcing the evacuations of tens of thousands and causing widespread damage.

Forecasts showed that the Rohingya camps in Cox’s Bazar were not in the cyclone’s direct path, but aid workers said the storm still posed enormous risks for the refugees.

Residents were stocking up on food and wrapping personal documents in plastic while humanitarian groups were placing inflatable boats in the camps to prepare for storm surges of several feet, according to the report.

“We could avoid casualties as people were moved to cyclone centres earlier,” Karim said. Embankments were also breached in West Bengal’s Sundarbans delta, where weather authorities had said the surge whipped up by the cyclone could inundate up to 15km inland.

The ecologically-fragile region straddling the Indian-Bangladesh border is best known for thick mangrove forests that are a critical tiger habitat, and is home to around 4 million people in India.

On the Sundarbans’ Ghoramara island, resident Sanjib Sagar said several embankments surrounding settlements had been damaged, and some flooding had started.

“A lot of houses have been damaged,” he said by phone.

Anamitra Anurag Danda, a senior fellow at the Observer Research Foundation think-tank who has extensively studied the Sundarbans, said embankments across the area may have been breached.

“The cyclone surge coincided with the new moon high tides. It is devastation in the coastal belt,” he said.

Md Mohsin, the director general of the Department of Disaster Management, said the coastal districts experienced tide of 4 to 5 feet higher than normal level due to the storm. Dams were breached in Shyamnagar and Ashashuni, he said.

The authorities were yet to collect all the data on casualties and damage. Mohsin said they will be able to give an initial picture on Thursday after the officials at the storm centres finish their job.

The cyclone crossed Satkhira district and was lying over Jhenaidah at midnight, Bangladesh Meteorological Department said in a special bulletin.

Maximum sustained wind speed within 74km of the cyclone centre was about 160kph rising to 180 kph in gusts or squalls. It was likely to move in a north-northeasterly direction further and weaken gradually.

Meteorologist Monwar Hossain said the great danger signals in the maritime ports and coastal districts will remain at place overnight.

This report has been republished from The Eastern Link under a collaboration. The casualty figures have been updated in this version, as per latest government submissions.

With Trump in the White House, the Fight for Racial Justice Gets Nastier

View from Kathmandu: India and Nepal Should Resolve Kalapani Dispute Once and For All

For India, Non-Alignment Is the Best Response to ‘Cold War 2.0’

Soumyadeep Guha - September 22, 2018
India, by falling back to its traditional non-alignment policy, can serve as a mediator between an increasingly assertive China and the West.