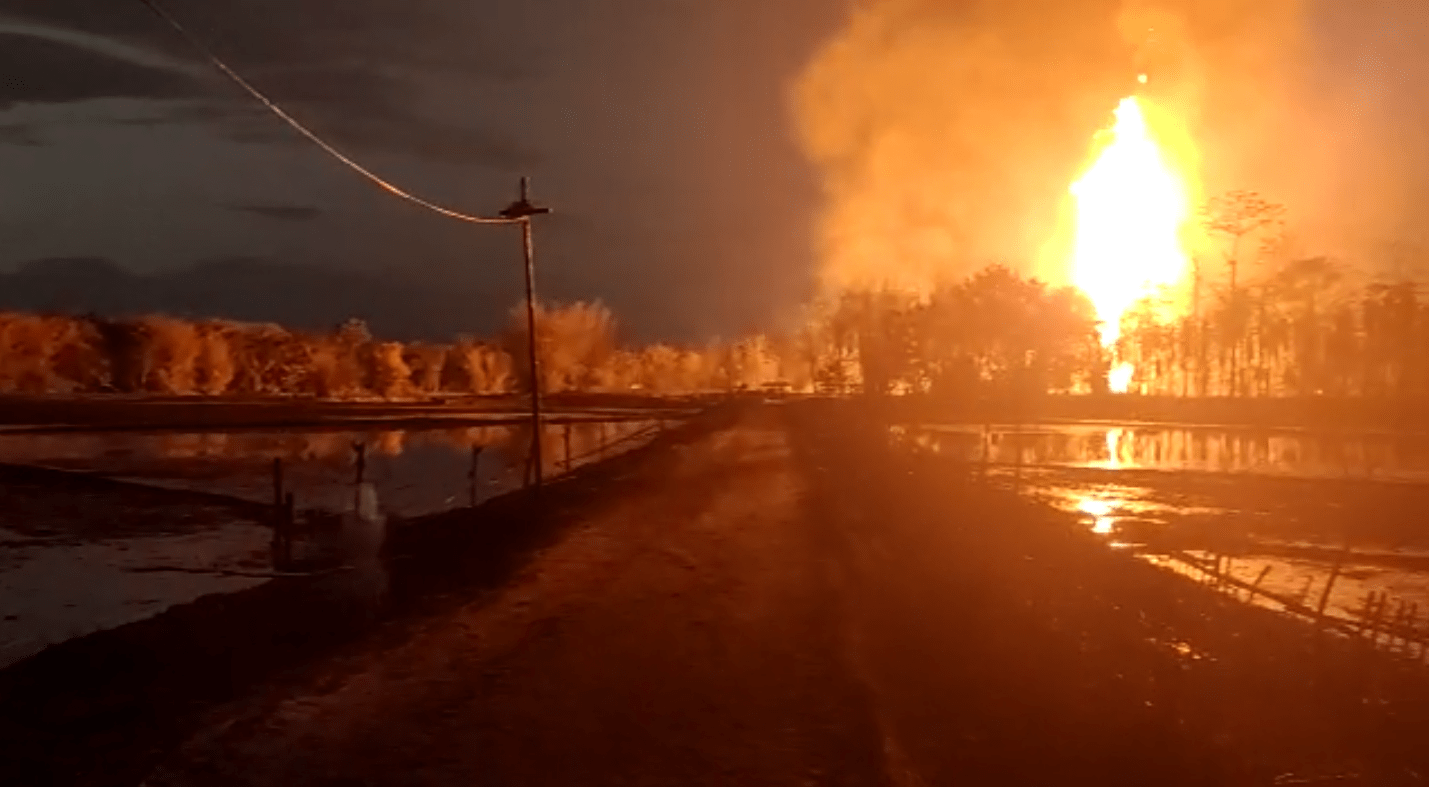 What began as a thought within a group of friends went on to become a concerted attempt to stand by the side of the victims of the Baghjan oil well disaster to provide relief to the displaced people whose lives are more uncertain than ever now.

On 9 June, an oil drilling site managed by Oil India Limited (OIL) in Baghjan in Upper Assam’s Tinsukia district erupted in flames after spewing gas and condensate for two weeks.

The oilfield inferno and the catastrophe that followed compelled us to head towards those in the campsites whose lives are more uncertain than ever, simply because the authorities from the hallowed halls of Oil India Limited (OIL), with plans only for staple meals, have done little to ensure the minimum dignity of the survivors.

Over the last three days, we visited the campsites and managed to distribute essentials to the displaced and stranded families. In the process, we came up with some observations and appeals.

12 June: a catastrophe without adequate stocktaking

On arriving at the Guijan High School relief camp, we got to know that the people there were inhabitants of Notun Gaon area. Notun Gaon, which falls within a radius of 1.5 kilometre from the blowout site, continues shake with small quakes.

This area also fringes the Maguri Motapung beel (lake), a rich biodiversity hotspot. Following the spill and the full-fledged blowout, countless flora and fauna have been affected, and the effects appear irreversible. It came as a shock to many that there had been no survey or stock taking of the damage on the part of authorities till 18 June, more than a week after the blowout.

We appeal to the government authorities to conduct a thorough study of the affected regions, and the concerned departments (geology, geography, chemistry, and other) of the universities in Assam and other states of the Northeast to engage with the authorities to arrive at a solution swiftly.

Needless to say, the number of displaced is large, our funds are limited and we are faced with the setback of not finding a proper record of the victims. There are fourteen camps scattered across areas with varying distances from Tinsukia township. A proper headcount of the stranded people is not yet available in the public domain.

Also, we could not locate the details of the camp-managing bodies. We urge the concerned authorities in the Tinsukia District Administration to fix these issues. We also urge the groups willing to come towards the campsites to take a proper survey beforehand in order not to let their efforts go in vain.

One person from Bandarkhati campsite grieved before us.

“We were frightened by the Coronavirus first, then came the flood, and this blast. The farms were our only means of survival. All our soil got charred in fire, Maguri Beel, the Dangori River, we lost everything we were living on. Now they are saying that the government will allot money. But we lost everything. We have no documents or papers whatsoever. How are we to avail the sum then?”

The fear that the lack of documents might disenfranchise them of the rights is a legitimate one. This issue has not yet received any attention from the administrative authorities.

14 June: a pandemic and a stranded populace

With the Chief Minister’s visit, arrived a bouquet of announcements that included the prospect of a higher secondary school proposed in the region, among others. We came to know that sheltered in the camps are students appearing in the finals, both HSLC and HS.

In this part of the country, a considerable number of higher education institutions have already scheduled their admission procedures for the months of June and July. This needs attention on our part, for it is very likely that the current state of affairs of the displaced and their children would nip their dreams and aspirations in the bud.

We would like to draw attention of the concerned authorities at the Ministry of Education regarding this arrangement which, as of now, remains unaddressed. The youth forums and unions of the locality may also serve a significant purpose in this context by facilitating the online admission procedures for the stranded students.

While distributing mosquito repellents as part of our outreach drive, we were intercepted by a woman with the concern that those products may have harmful consequences for the kids in the Baghjan campsite. While talking about the enormous damage she suffered with her livestock and farmland, she drew our attention to the prospect of child healthcare while choosing to remain unnamed:

“Have you seen these kids? They have all gone pale from the night this land went up in flames. How long do we need to stay in the camps like this? Our children are suffering and are in want of proper protection.”

In the same camp, we noticed a number of stranded individuals aged sixty and above. In trying times of the COVID-19 pandemic sweeping across continents, children and the senior citizens need special medical attention as they are more vulnerable to the contagion.

Corralled in reasonably smaller spaces (schoolrooms), aspects of sanitisation and social distancing too demand attention more than ever before. The competent authorities need to take an urgent call on this, which, for the most part, appears to have escaped their attention till now.

A team of two visited families sheltered in Baghjan High School, which received additional people from the Kordoiguri relief camp on 12 June. Behind the two people who went, was the immense empathy and concern of many. We distributed 70 supply packages amongst around 100 stranded families. Each package contained a set of essentials.

We were also armed with a few miscellaneous items to be distributed as deemed necessary. On our first-day itself, we came to know that the camps near the township had been receiving a fair bit of attention of the people for which we chose to consider the ones with a relatively limited concentration of relief materials. Such is the plight that the people in the Baghjan High School camp, along with those earlier sheltered in Kordoiguri, had to go on a strike picket with placards to make both ends meet.

What appears to be a need of the hour is the prospect of proper rehabilitation and a reframing of livelihood possibilities for the stranded families. So far, we have seen the concerns remain largely centred on the people of Baghjan. But those of the fringe settlements – Notun Gaon or Barekuri areas, for instance – have not yet come to the fore of the relief campaigns.

Further, the fact that those in close proximity to the site of the fire are vulnerable to imminent health risks as a result of prolonged exposure to leaking condensate and gas must be noted too. The displaced are already complaining of skin rashes. What’s more, some have even showed confirmed symptoms, such as itchy eyes.

One person from the nearby village panicked before us with the thought of an impending health crisis:

“The whole plot of land, air, water – all went into a sinister turn of events. Everything happened right in front of our eyes, and it all transformed into something we had never foreseen. We fear that the very air we are breathing and the watercourses we are accustomed to using have been contaminated. If you go asking around here, everyone would say they have an irritation in the skin or itchiness in their eyes”.

It was clear to us that the ensuing health crisis had not yet been properly addressed or diagnosed. OIL cannot continue to beat around the bush, or fence it by the façade of Corporate Social Responsibility (CSR). It must be held accountable for the sufferings of the Baghjan victims.

The stakeholders need to make their way towards the sufferers and take inventory of the ground realities in order to draw out tangible solutions for the stranded families, while taking into account critical live-saving aspects, like health insurance, to ensure long-term care.

Our work is not yet over. The displaced are in situations worse than we ever imagined. And their woes may just worsen if no one makes sustained efforts to rehabilitate them. It is time that everyone involved in the crisis and the aftermath from different walks of life – academics, ecologists, activists and so on – must take cognisance of the “polluter pays” principle enshrined in the 1992 UN Rio declaration. So must the patrons of OIL, at whose behest developmental strategies go sky-high and pierce through the earth’s crust, defying the catastrophic consequences.

We would like to make an appeal to the organisations carrying out various outreach drives in the region to think and work beyond the boundaries of their respective domains in order to achieve a collective impetus and urge everyone to keep showing their cooperation and support for the victims of the Baghjan disaster whose problems won’t just vanish overnight.

Bornil Jonak Phukan is a Research Scholar at the Department of Cultural Studies, Tezpur University.

Ajitabh Hazarika is a Research Scholar at the Department of English, Tezpur University.