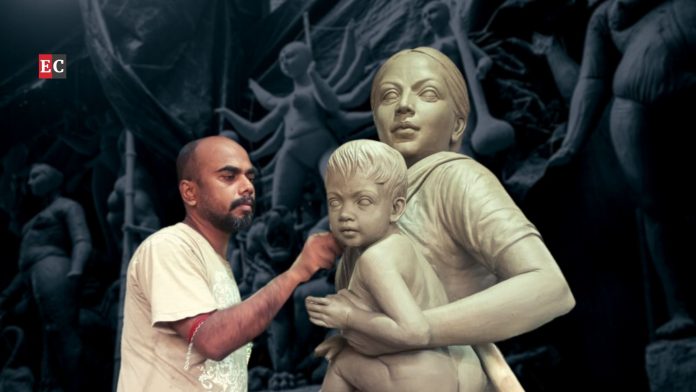 From a migrant worker struggling to reach home in pandemic-stricken India to a doctor killing COVID-19, idols of Goddess Durga during this year’s Durga Puja have demonstrated the extraordinary potential of arts and aesthetics in bringing social change.

Artisans have a powerful acumen to conceptualise ideas and transform realities into visually appealing art. In a country devastated by COVID-19, art can be a powerful tool to sensitise the mass about critical issues, such as the unprecedented migrant crisis triggered by the sudden countrywide lockdown imposed on 23 March and the plight of health workers.

Contradictory to the powerful potential of artisans to spread awareness and sensitisation is the fact that artisans are one of the most underpaid segments of the Indian economy whose welfare is hardly taken care of.

Another paradox is the representation of crisis by artisans who are victims of the very same crisis. Bengali artisans have been unable to travel to other cities outside West Bengal to craft Puja pandals this year due to the travel restrictions necessitated by the pandemic.

The artisans who came up with creative manifestations of Goddess Durga, such as a migrant worker mother in Behala’s Barisha Club, belong to the informal class. These workers are unable to migrate to other parts of India to carve idols at Durga Puja pandals.

Some artisans have also come up with sustainability-promoting ideas, case-in-point the idol of Goddess Durga in Assam made of medical waste, expired capsules and syringes. The very class that is standing in long queues at medical stores and is unable to access medical facilities is the inspiration for this Assam-based Durga idol conceptualised by Sanjib Basak, an award-winning artist.

An interesting parallel to the waste stock of medicines observed by Basak during his COVID-19 duty is the remaining stock of clay idols built by Kumartuli artisans in Kolkata’s famed potters’ neighbourhood. Interestingly, while medicines are in demand, clay idols of Durga are not in demand in the mellowed-down festive season. Artisans, especially potters in West Bengal, have faced immense losses as the orders for their idols were cancelled due to the COVID-19 pandemic.

Theme-based pandals have a history of representing political, economic and social issues. In 2019, a Kolkata-based Durga Puja pandal captured the refugee crisis amidst fears of implementation of the National Register of Citizens (NRC). In 2018, Kolkata’s Deshapriya Park hosted a Durga idol based on the ‘Gujarat model’, the developmental framework that led to the rise of current Prime Minister, Narendra Modi.

Puja in times of pandemic

Many artisans depend on festivals such as Durga Puja for their livelihood. Most artisans belong to the informal sector of the economy whose work is seasonal and revolve around religious and cultural celebrations. Understandably, to curb the further spread of COVID-19, state governments have banned mass gatherings this year. Considering that Durga Puja celebrations attract mass gatherings, especially in West Bengal, the ban has meant dim economic prospects for artisans.

“Today, violence and hatred are increasing and an all-round collapse of the moral fabric is evident. In such a situation, the Government of Delhi is formulating a comprehensive cultural policy to ensure the meaningful contribution of art and culture towards transforming the mindset of society,” Sisodia said.

This Durga Puja, artisans have shown commitment, grit and endurance through firing up their imagination and creating path-breaking idols despite a limited budget. As we bid adieu to Goddess Durga this year, we can hope to have a new normal by next year where welfare of artisans forms a part of the policy-making narrative.

is the author of Unapologetically Mad and Indian Feminine Fury. She has studied English Literature at the University of Delhi.