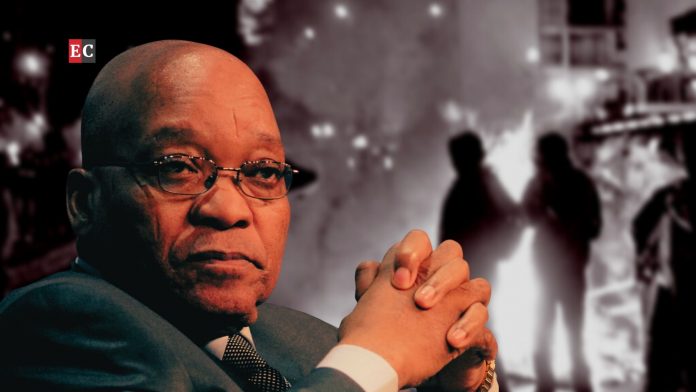 From time to time, South Africa is rudely reminded that its past continues to make its present and future difficult. It does not always recognise this reality when it sees it.

The latest – and most shocking – reminder is the violence which followed the imprisonment of former president Jacob Zuma. The mayhem devastated KwaZulu-Natal, the home of Zuma and his faction of the governing African National Congress (ANC), and damaged Gauteng, the economic heartland which also houses hostels in which working migrants from KwaZulu-Natal live.

The violence was seen as a new threat to the democracy established in 1994. But, while it was severe, it was a symptom of a past the country has yet to face, not a future it did not see coming. Even the one aspect which was new – the scale of violence in KwaZulu-Natal – was a product of realities which have been evident for years.

Destructive violence is frightening. In South Africa, it is even more alarming because its middle class, which monopolises the debate, assumes that it is only a matter of time before the country is engulfed in conflict. This makes it important to point out that, as severe as the violence was, it does not mean that the country’s democracy is in deep danger.

The South African mainstream, which expected democracy to usher in a perfect country and is repeatedly angered that it didn’t, ignores a core reality – that democracies are tested all the time. For people who like power – who exist in all societies and at all times – there is nothing natural or necessary about democracy. It forces them to obey rules they would rather ignore, listen to voices they would rather not hear, and allow others to take decisions they would prefer to take.

This means that there is nothing fatal about democracy being tested – it always is. The question is whether it passes the test. The violence did test democracy. Whether President Cyril Ramaphosa is right that it was a failed insurrection is open to debate. But the violence was aimed at ensuring that democracy did not work. Democracy survived the assault. Whether this test strengthens it depends on whether the issues which caused the violence are addressed. And that depends on understanding what the test was.

The violence has been widely seen as an expression of anger and frustration by people living in poverty, which has been much worsened in South Africa by the impact of COVID-19. But there was no revolt of the poor – it was an assault on democracy by elites.

The KwaZulu-Natal violence was frighteningly new because much of it did not follow the familiar pattern of conflict in South Africa and other countries. While there was looting, a common response to conflict by people living in poverty, there was also an assault on infrastructure, destruction of businesses and the “disappearance” of large stocks of bullets. None of this squares with what we might expect people fighting poverty to do during a conflict.

Nor was the violence a popular uprising. There were no large public demonstrations. The scale of the KwaZulu-Natal violence was huge but you don’t need many people to set fire to electricity installations or factories. The damage could have been done with minimal public support and almost certainly was. This was an uprising of elites, not of the people, although some joined the looting as we would expect people in poverty to do.

Ironically, the claims that this was about poverty or the COVID-19 lockdown blame the people for something the elites did.

But which elites? It will take a while before we know exactly what happened. But there are two elements in reports of the violence which suggest that it was a product of realities which have been evident to researchers for years.

First, although South Africa’s democracy is the product of a negotiated settlement, it followed armed conflict between the minority government and the forces fighting for majority rule. This makes the country another example of what some academics call “war transitions”: change from one political system to another where there are armed people on both sides of the divide.

In these cases, the textbook idea that only the state uses violence and does this within rules which are clear to all does not apply. Some people still have weapons and armed networks, whether they are inside or outside the government, and are not necessarily bound by the rules.

This has been a South African reality since 1994. It shows in constant factional battles between state intelligence operatives, in divisions between ex-combatants in the fight against apartheid, in security companies and criminal gangs whose members bore arms before 1994.

Their political loyalties may lie with members of the faction, not the governing party, let alone the state. Their networks may be devoted not only to a common political goal but also to gaining wealth and economic influence. This has made keeping order far more difficult. It can also make creating disorder easier.

The second is that local councillors allegedly played an important role in the violence. This too would reflect a long-standing reality. Attention to corruption in South Africa focuses on national government, but local and regional networks devoted to getting richer at public expense are far more deep-rooted. There is a clear link between them and violence – KwaZulu-Natal in particular has seen repeated killings of councillors or local officials who tried to resist corruption.

Both the people under arms and the local networks had ample reason to mobilise their power for harm – Zuma’s imprisonment may well have signalled that power had shifted in ways which threatened the survival of the networks. They may not have been trying an insurrection, which means they were trying to seize power. But they were doing whatever they could to ensure that their networks survived.

So, while the scale of the violence may have been new, its origins are not. They are deeply embedded in South Africa’s unfinished business, its inability to create a single source of public order or to change an economic balance of power which ensures that ambitious people with the means to destroy see their networks as the only route to wealth.

The violence wreaked its damage because South Africa’s journey to democracy remains incomplete. It sends a sharp message that the country must look its past far more squarely in the eye and find ways to change it before it can be confident about avoiding more of what happened in KwaZulu-Natal.

is Director of the Centre for the Study of Democracy at Rhodes University and the University of Johannesburg.