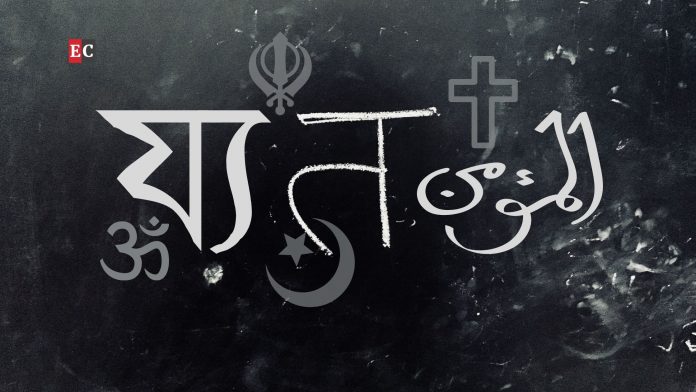 The study of religion – or “theology” – has always been a very complicated and controversial subject. According to the Oxford Dictionary, “religion” is the “belief in or worship of a ‘superhuman’ (or divine) force that controls the Universe, especially one’s God/Gods.” This belief or worship has always been governed by one’s birth; however, in present times, religion is also considered to be individualistic.

Even the Constitution of India presents “Right to Religion” as a fundamental right. India has been a democratic and “secular” country since its independence. Every individual had the freedom to practice their religion in public; dress and accessorise oneself according to a particular religion with a public display of their religious signs and symbols. Now, as far as, religion is concerned, it is restricted mainly to one’s way of dressing or worshipping.

On the other hand, language (or speech) is always viewed as an entity that has no influence of one’s religion. It is something that is primarily governed my one’s domicile and by parentage. It is true that in India, a particular language is always used as the medium in religious scriptures, chants, and the likes. Yet, that may not be not the language in which one speaks.

In India, the most common language, from Kashmir to Kanyakumari, is Hindi – which is written in Devanagari. However, most people do not converse or write in “pure” Hindi – it is peppered by other linguistic influences, such as those of Urdu. For instance, the Hindi word for “use” is “bhyavhar”; but, most people use its Urdu counterpart “istamal”. Yet, nobody really pays attention to it. In this regard, I recall a personal experience from my doctorate days.

In a central government institution, one may not really expect discrimination of any kind to exist. However, as we all know, since 2014, there has been a pervasive attempt in India to provoke individuals on supposed “religious issues”. Spoken Hindi (as opposed to its literary form) is the most common language in any central government institution in India, and I was no exception to this, although I am an Assamese by domicile and birth.

I was sipping tea in a crowded tea shop near my department, when I saw one of my batchmates. Smiling at him, I asked the most general question – “Kaise ho yaar?” or “How are you?”

As the shop was packed with students, I heard his reply but not very clearly. I knew he said he was fine, but I wanted to confirm the decorations he used in his reply, as “Thik hu” (I am fine) wasn’t the only thing he replied with.

I curiously asked, “Kya bola? Aapki ‘dua’ se thik hu?” (What did you say? I am fine with your blessings?)

He replied, slightly haughtily, “Main ‘dua’ kyu bolunga? Mai ‘mullah’ nahi hoon. ‘Dua’ muslim word hai, mai Hindu hu. Toh mai kaise ‘dua’ bol sakta hoon? Maine bola tha ‘Aapke aashirwaad se thik hu.’ Yaad rakhna ok?” (Why would I say ‘dua’? I am not Muslim. ‘Dua’ is a Muslim word, and I am a Hindu. So how can I say ‘dua’? I said “I am fine by your aashirvad.” Remember that, okay?)

And he left with his tea, as I flashed a thumbs-up. Though I didn’t think of this incident too much at that time, I couldn’t help feeling a little flustered.

If that is the case, we would lose most of our Bollywood songs. This incident that occurred nearly two years ago might have been insignificant, but it left me with a question – “What is the religion of my mother tongue (Assamese)?”

Assamese originated as the court language of the Ahom kingdom in the 17th century, though an ancient form of this language – Brojawali – existed in the 15th century with the popularity of Srimanta Shankardev’s Vaishnava sect. As a practice of this saint’s Eksharana Dharma, several songs and prayers were composed in Assamese, which is still used in the “Naam-Kirtans” sang at Namghars (neo-Vaishnavite monasteries in Assam) and other places.

Similarly, a number of Jikirs, which originate from the word ‘Dhikr’ (remembrance of Allah), exist and continue to be sung in Assamese even today. Except for the name of the Almighty used in both, no specific words of Assamese are used in these songs, in terms of religion. Thus, one may convincingly argue that Assamese is not a language based on any particular religion. Chaitanyadev, another Vaishnavite saint who started preaching with “Haribol”, composed many such Kirtans in Bengali.

Does this religion-neutrality apply to all languages, and it is just as human beings, who colour language with a coat of religion on it? Certainly something to ponder on during a time of cultural revival through politics.