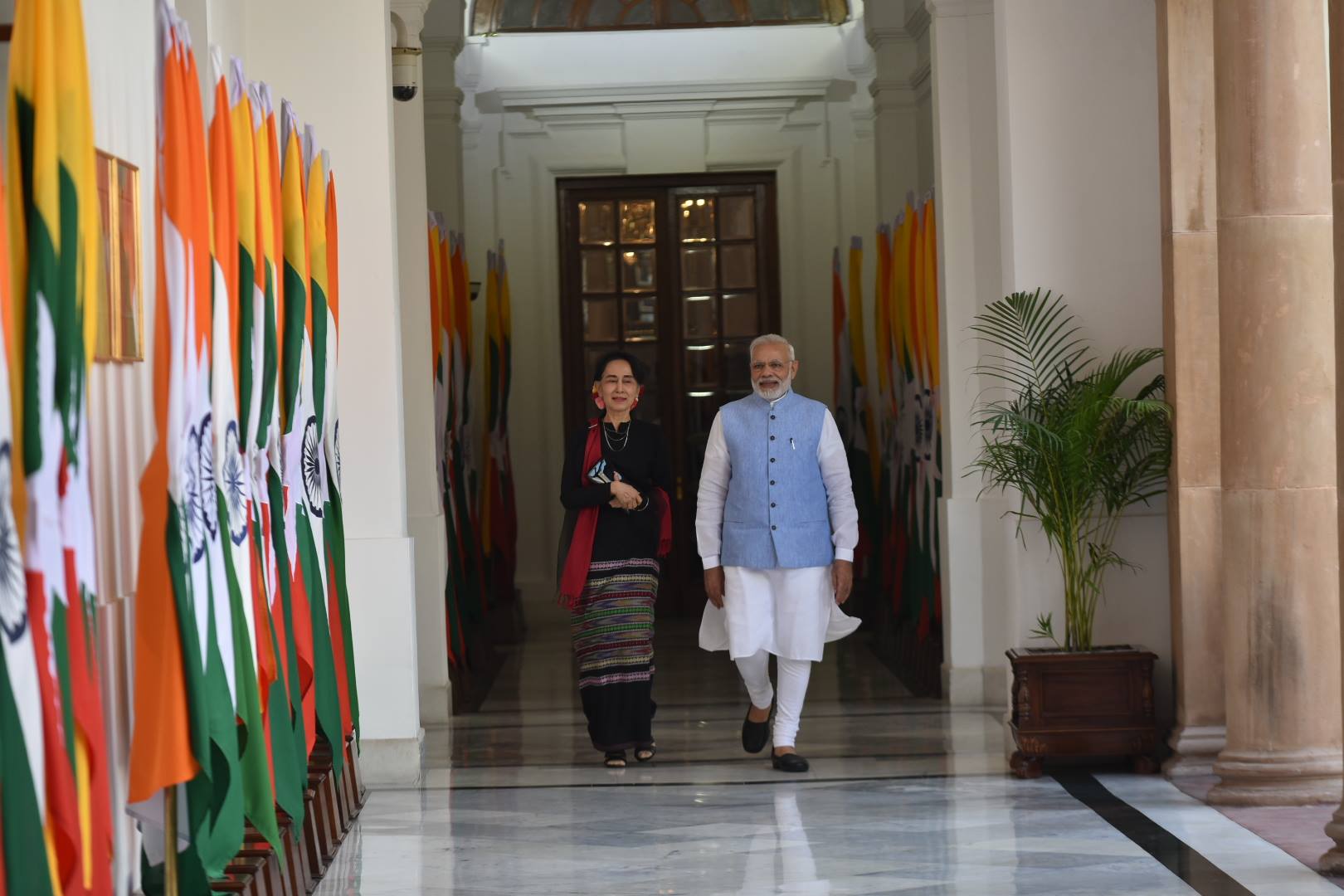 The tour comes amidst heightened violence in the north of Myanmar’s restive Rakhine State, triggered by a coordinated insurgent attack by local Rohingya militants on security installations on 25 August. The assault was claimed by a newly-formed local armed group known as the Arakan Rohingya Salvation Army (ARSA).

The ensuing violence, including the aggressive response by Myanmar’s security forces, allegations of human rights violations, and the mass exodus of Rohingyas to neighbouring Bangladesh, has drawn the attention of the international community like never before. With the United Nations predicting that the number of refugees could soon cross a staggering 3 lakhs, human rights activists, international organisations, and foreign governments have equivocally expressed serious concern about the sharpening humanitarian crisis and more crucially, the apparent inaction of Myanmar’s Nobel Peace Prize-winning State Counsellor, Aung San Suu Kyi.

An estimated 164,000 Rohingya refugees have fled violence in Myanmar’s northern Rakhine state in the past 2 weeks. https://t.co/WiITONb7yQ pic.twitter.com/OfAAc2oPzq

However, Modi categorically avoided pinning any blame on the Suu Kyi administration, Myanmar’s first popularly-elected government in six decades, for the continuing violence and displacement. Back home, the low talk of the town is that the prime minister only reaffirmed his anti-Muslim pathologies by not condemning the alleged state-sponsored violence against the Muslim minority community in Rakhine that identifies itself as Rohingyas.

What did Modi really say and not say while in Myanmar? Is New Delhi’s diplomacy with Myanmar devoid of moral concerns?

With respect to the crisis in Rakhine, Modi in his official press statement said the following:

“We are partners in your concerns over the loss of lives of security forces and innocent people due to the extremist violence in Rakhine State. Be it a large peace process or be it to resolve a specific problem, we hope that all the stakeholders can work together in the direction to find such a solution that will ensure peace, justice, and dignity for all by respecting the unity and territorial integrity of Myanmar.”

While the language of the above statement appears neutral, it is hardly so. The prime minister only alluded to the ‘extremist violence in Rakhine State’ — an indistinct yet obvious reference to Rohingya extremists who attacked security forces on 25 August — without talking about the violent disruption caused due to the disproportionate response by state security forces, the steady military build-up in northern Rakhine since a similar attack last year in October 2016 or the longstanding persecution of the Rohingya community by Myanmar state. Modi also skirted the direct political context of the violence, that is, the issue of providing citizenship to the Rohingya community.

Truth remains that extremism in Rakhine exists on both sides of the communal divide — majority Buddhists and minority Muslims. However, any extremism from the Muslims seems to draw far greater attention from foreign governments as compared to extremism from Buddhists. This is despite the fact that several first-hand accounts have accused ethnic Rakhine Buddhist extremists of attacking Rohingya villages from time to time, just as Buddhists (and the government) have accused Rohingya extremists of assaulting them.

Does Modi’s understanding of ‘extremist violence’ include Buddhist extremists too?

The answer remains unclear, or rather, nonexistent. That’s because New Delhi has cautiously postured itself on the diplomatic front over the Rakhine issue, with a clear intent of not fanning the flames on Myanmar’s Buddhist majoritarian sentiments. Noting crucial exceptions, of course, it would be fair to say that a large section of the Buddhist majority in Myanmar remains suspicious of its Rohingya Muslim population.

This communally-driven sensibility is even more pronounced in Rakhine State where the two communities live contiguously. What more? The ruling party in Rakhine State — Arakan National Party (ANP) — is dominated by staunch pro-Buddhist political figures who have continually hammered anti-Rohingya sentiments on to the public discourse. At the national level, things are not quite different, with the union ruling party — National League for Democracy (NLD) — enjoying a strong support of the Buddhist majority.

Thus, one finds a strong political logic in the Suu Kyi administration’s repeated emphasis on Rohingya extremism with zilch reference to Buddhist militancy. Does this then fall perfectly in line with New Delhi’s obsession with extremism of only a particular kind, that is Islamist extremism? At the very least, the incidental congruence of institutional sentiments is a comfortable marriage of convenience for New Delhi and Naypyidaw, if nothing else.

Further, a part of the joint press statement by Modi and Suu Kyi reads as follows:

“Myanmar condemned the recent barbaric terror attacks during the Amarnath Yatra in India as also various acts of terror perpetrated by terrorists from across the borders. India condemned the recent terrorist attacks in northern Rakhine State, wherein several members of the Myanmar security forces lost their lives. Both sides agreed that terrorism violates human rights and there should, therefore, be no glorification of terrorists as martyrs.”

There’s stark reciprocity in the above statement. Clearly, the statement — talking about “no glorification of terrorists as martyrs” — makes a not-so-implicit reference to former Hizbul Mujahideen leader Burhan Wani who was gunned down by Indian security forces in Kashmir last year and was later hailed as a martyr by local separatists.

The whole narrative appears to be a smooth quid pro quo between the two leaders whose understandings of terrorism converge on a common politico-communal standpoint. Intriguingly, this exchange of condemnations of Islamist extremism generally augured well with the majority populations of both Myanmar and India.

PM @narendramodi at the Puja at Yangon's Kalibari Temple. pic.twitter.com/S9X3aP8rBM

Furthermore, Modi pointedly referred to the 25 August incident as a “terrorist attack”. On deeper assessment, the assault does not look like a typical peacetime terror attack, but rather a classic insurgent offensive that took place in an already-active conflict zone. This is even more so given the non-religious narrative of ARSA. While labeling any violent attack by non-state actors, it is important to distinguish the context and the targets, which in this case were hard (military) and not soft (civilian) targets. New Delhi seems to have completely bypassed this crucial nuance, something that it has always done while also making policies for Kashmir.

The Importance of Suu Kyi’s Myanmar

The prime reason behind this is that the Modi government considers Myanmar a crucial geopolitical, strategic, and economic partner in its flagship ‘Act East’ agenda unlike the previous UPA government that did not really prioritise the country.

Under Modi, New Delhi has drawn up an elaborate plan to proactively reach out to the ASEAN region with the hope of linking Indian markets to the tiger economies of Southeast Asia. Thanks to the endemic geography of the region, Myanmar — as India’s ‘land bridge’ to the southeast — automatically stands out as a pivotal partner.

PM @narendramodi : Deepening relationship with Myanmar is a priority for India, as a neighbour and also in the context of 'Act East Policy'. pic.twitter.com/1O5tNzedpd

This is even more so given the newly-synthesised space for broader bilateral engagement in Myanmar after the coming of a popularly-elected government in April 2016.

The Modi government has already put pending infrastructure projects in Myanmar on a fast track with the unmistakable intent of finishing the incomplete work of its predecessors. Incidentally, the most prominent of all Indian infrastructure projects in Myanmar is the recently-completed port in Sittwe, the capital city of Rakhine State. Hence, the politically restless Rakhine is a key component in India’s economic blueprint in Myanmar. New Delhi has also begun to forward an overt agenda of modernising the Tatmadaw (Myanmar’s defence services), having already transferred advanced military hardware, including attack helicopters, to the latter. Recently, India also hosted Myanmar’s commander-in-chief on a rare eight day-long visit.

Moreover, India is also concerned about its 1,640 km-long overland border with Myanmar, straddling the former’s northeast and the latter’s northwest. New Delhi seeks the active partnership and willingness of the Suu Kyi administration to secure the jungles of Myanmar’s Sagaing Division that have provided safe haven to a bunch of North East Indian insurgent groups like the Myanmar-based National Socialist Council of Nagaland — Khaplang (NSCN-K).

While the government of Myanmar continues to maintain a conciliatory status quo with NSCN-K, courtesy of a 2012 ceasefire, India remains edgy about the threat. A large part of the military-to-military intimacy between the two countries is rooted in precisely this: securing the volatile border.

Under its ambitious Belt and Road Initiative (BRI), Beijing has made significant inroads into Myanmar over the past two years, taking advantage of the newfound openness of engagement. It has already operationalised a full-fledged deep sea port in Kyauk Phyu, located in southern Rakhine State, to transport crude oil to the Yunnan Province in southern China. The two countries have also finalised several other critical infrastructure projects and public goods deals with Beijing, thanks to the latter’s unending supply of cheap goods.

India, clearly, is quite anxious about China’s growing clout in Myanmar, including the possibility of a permanent Chinese strategic presence in the country and resultant dominance over the Bay of Bengal region. Thus, today, the Land of Jade is far more important to India than ever before.

In such a situation, New Delhi would not want to stoke the hearth by cornering Naypyidaw over a highly sensitive topic like the Rohingya crisis. If it does so, New Delhi stands to instantly lose all the diplomatic capital accrued over the past three years and ultimately, cede significant geostrategic space to China. A potential Islamist extremism is perhaps the only common agenda that Modi and Suu Kyi are willing to publicly talk about with respect to Rakhine.

Thus, there is little doubt Modi’s bespoke and perhaps, morally strained, stance on the Rohingya is deeply rooted in a realist state-centric politics, ridden by an objective transactional logic. To expect some sort of morality in this narrative would be ideal but naïve.

This piece originally appeared in Firstpost on 12 September 2017 under the title ‘By not calling out Aung San Suu Kyi over Rohingya crisis, Narendra Modi has chosen logic over morals.’