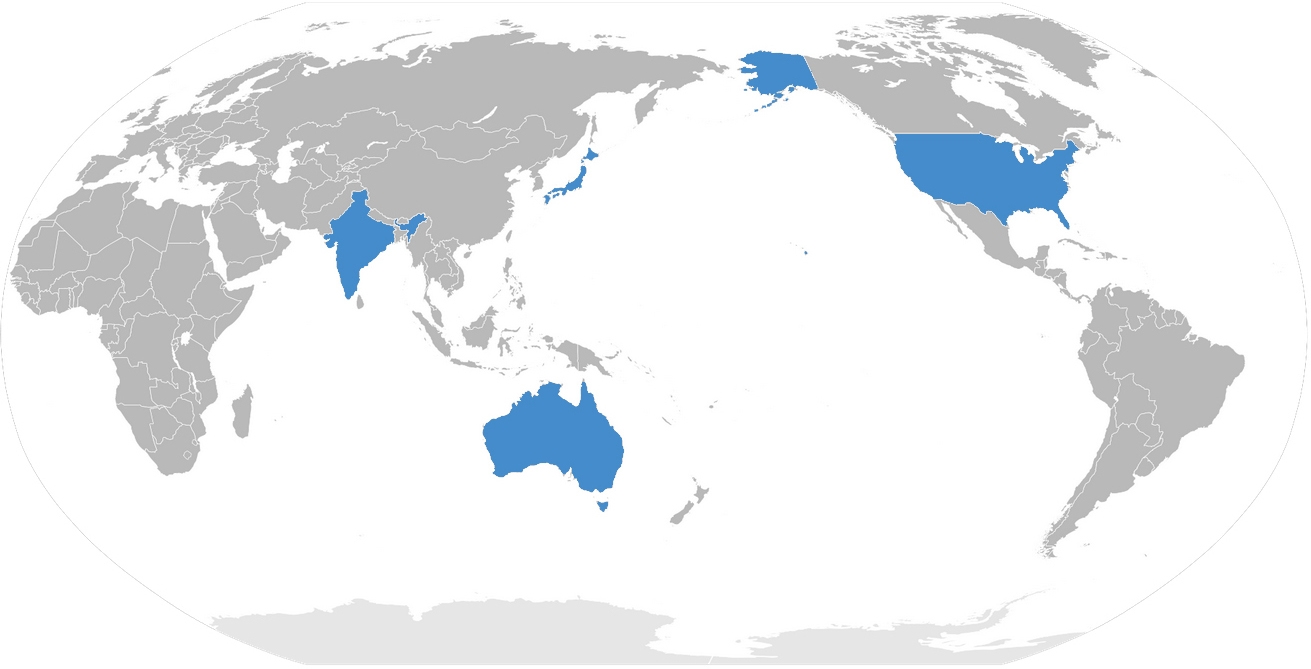 The term ‘Indo-Pacific’ has understandably gained currency over the past one year.

The usage of the term, as opposed to ‘Asia-Pacific’ (which China prefers) by US President Donald Trump during his trip to Asia in November 2017, the re-emergence of the India-US-Australia-Japan Quadrilateral Grouping after a decade, and the repeated usage of the expression ‘Free and Fair Indo-Pacific’ on several occasions by top officials of the Trump administration (including former Secretary of State, Rex Tillerson,) have amplified the international narrative around the idea of the ‘Indo-Pacific’.

The term ‘Indo-Pacific’ has featured in prime news cycles over the past few weeks.

First, on 31 May, the US Pacific Command or ‘Pacom’ was renamed as the ‘Indo-Pacific Command’. Speaking on the occasion of the change of command, US Defence Secretary, James Mattis put forth the reasons for the renaming:

“In recognition of the increasing connectivity between the Indian and Pacific oceans, today we rename the U.S. Pacific Command to the U.S. Indo-Pacific Command […] over many decades, this command has repeatedly adapted to changing circumstance and today carries that legacy forward as America focuses west.”

Second, at the annual Shangri-La Dialogue in Singapore in early June, the US Defence Secretary pulled no punches while speaking of China in context of the South China Sea dispute. Mattis remarked:

“There are consequences that will continue to come home to roost.”

Mattis also referred to some steps which the US has taken recently, such as exclusion of China from the Rim of the Pacific (RIMPAC exercises), as well as two US ships sailing in Spratly Islands. He warned of more such consequences, if Beijing did not change its approach towards the SCS dispute.”

During the Shangri La Summit, the Indian PM referred to ‘stable, secure and prosperous Indo-Pacific Region” as an “important pillar of strategic ties with the US. He did manage to strike a fine balance, and was not aggressive.

Finally, senior-level officials from the Quad countries met in Singapore on 7 June for the second time since last year. India was represented by the Ministry of External Affairs’ (MEA) Joint Secretary for East Asia. A statement released by the MEA stated that while recognising the centrality of the ASEAN to the Indo-Pacific architecture, Quad members also “reaffirmed their support for a free, open, prosperous and inclusive Indo-Pacific region.”

If one were to look beyond Mattis’ remarks and Modi’s South East Asia visit, it is important to take note of two new stakeholders in the Indo-Pacific narrative – Indonesia and Sri Lanka. So far, the emphasis has largely been on the Quad grouping.

Sri Lanka and Indonesia are both strategically important in the context of the Indo-Pacific, what also makes their participation relevant is the fact that both also share close economic ties with China, although the former is certainly wary of China’s increasing strangehold.

A delegation of US officials visiting Sri Lanka spoke about the importance of the island country in context of the Indian Ocean. Congressman Mac Thornberry, Chairman of the House Armed Services Committee, stated:

“The American relationship with Sri Lanka goes back to hundreds of years, and Congress is committed to deepening it going forward. Sri Lanka is a vital hub in the Indian Ocean, one that is key to keeping the lanes of commerce and security free and open.”

Off late, Sri Lanka has expressed its discomfort with China’s increasing presence, and has sought investments from other countries like Japan and India.

The Hambantota Project (of which China has gained lease for 99 years) is often cited as an important instance of China’s ‘Debt Trap Diplomacy’. A report by the Centre for Global Development describes this best and states that Beijing, by pushing ahead certain projects, “introduces new debt vulnerabilities in developing countries and risks growth setbacks.” The US delegation also took note of this aspect.

The Indo-Pacific narrative can draw greater resonance if there is an emphasis on connectivity and providing an alternative to China’s infrastructural projects, some of which are economically unfeasible. Apart from this, there needs to be more stakeholders in the Indo-Pacific endeavour – like, Indonesia, Sri Lanka and Bangladesh – so as to have a vision, which surpasses the China factor in the South China Sea.

It is also important now for countries, which are part of the Indo-Pacific grouping, to define their geographical scope and formulate a clearer economic vision to accelerate projects like the Indo-Pacific Economic Corridor. These can complement India’s neighborhood outreach in South Asia, ties with South East Asia, besides Japan’s projects in the two regions.

While the US has spoken about a Free and Fair Indo-Pacific, Trump’s fickle-mindedness towards his own allies on key economic and strategic issues is doing no favors to anyone. A strategic vision has to be matched by a concrete and cohesive long-term view of robust economic linkages.

It is also important to realise that in the longer term, the economic vision of the ‘Indo-Pacific’ cannot ignore China, which with all its constraints, has taken a lead in pushing for connectivity and economic linkages in this pivotal region.