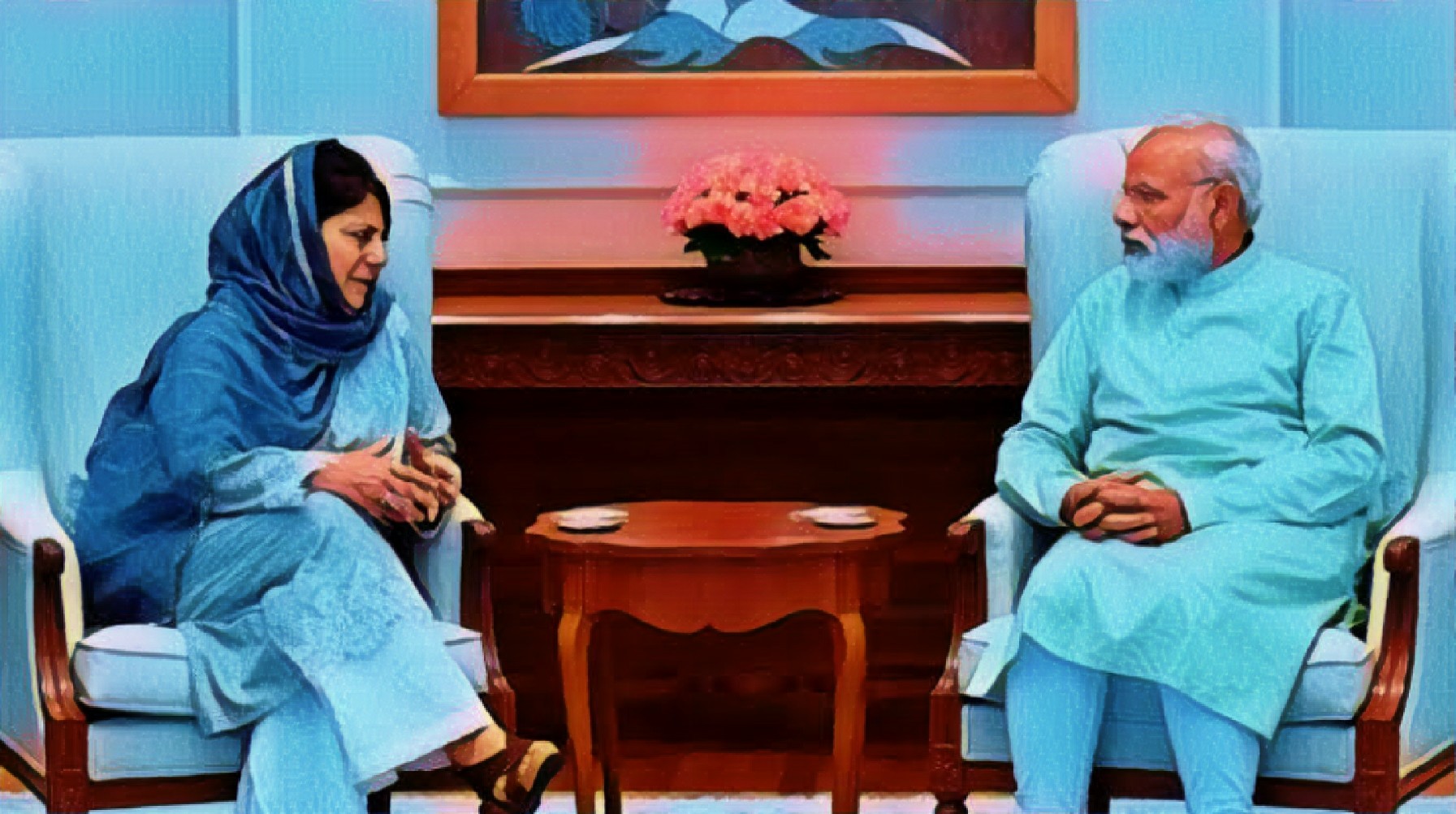 The Bharatiya Janata Party has over the past weeks termed its pulling support from its own PDP-BJP coalition, its dismissal of the Chief Minister Mehbooba Mufti, and the beginning of a prolonged Governor’s Rule as a move of patriotic conscience. The parties opposing the BJP have described the moves as selfish backstabbing. Few realise that this was a series of well-calculated steps to checkmate the local parties in Jammu and Kashmir.

BJP Pulls Out Of The PDP Coalition Govt In Jammu And Kashmir, Calls For Governor's Rule #BJPDumpsPDP@rammadhavbjp @BJP4India @jkpdp https://t.co/KgFdzBFw1V

Coalition politics are a useful tool for understanding the PR-narratives created by parties in order to delude the voter regarding the actual vested, partisan interests behind the capture, consolidation and sharing of political power.

Pre-poll narratives have often helped to politically and electorally empower the BJP, turning it into an actual tiger from a paper one, due to a polarised vote – ala Bihar or UP. Post-poll alliances need not do so for the next election, necessarily.

None of this would have happened, had the National Conference (NC) and People’s Democratic Party (PDP) decided to join hands after the declaration of results of the past election in 2014-15, to form a coalition narrative of local parties seeking local advancement (regardless of whether genuine) meant 28 seats + 15 seats, versus mainland parties (seeking to advance the historical interests of the Indian state) 25 seats + 12 seats. 1 CPI(M), 2 JKPC, 1 PDF or 3 independent MLAs would have taken the 43-member coalition over the top (44 were needed out of 87 total members in the assembly). It would have been politically damaging for the independents (all locals) to not side with the local alliance in an “us or them” milieu. Today, all those who took part in the experiment with the BJP lie deeply damaged.

Newly dismissed J&K CM Mehbooba Mufti went to the extent of blaming the BJP-PDP alliance on her father – in an effort to do damage control to the reputation of her party in light of the disastrous result of that tie-up.

“I have submitted my resignation to the Governor. Mufti Mohammad Sayeed had entered into this alliance, thinking that BJP is a big party which had got a big mandate,” Mehbooba Mufti said.

“It took a lot of months to come to an agenda, whose main objective was reconciliation and dialogue in Jammu and Kashmir. We wanted confidence-building measures in Kashmir,” she said.

“The biggest apprehension was Article 370, about our special status. In the last three years, we defended Article 370 in courts. We also withdrew cases against over 11,000 youths,” she added.

The BJP has achieved in the state nearly everything it sought to accomplish, save for law and order. It successfully sabotaged as well as moulded a state government. It extended the status quo on conflict. Further, a law and order crisis and projections of heightened militancy only serve to help the mainland Hindu voter seek a heavier-handed policy and a more assertive Indian state in J&K – currently, the natural choice in that regard tends to be the BJP. No matter how much the PDP tries to point out that it safeguarded local interests, it is clear that it did not do much in the face of brutality by the forces under the Central government’s command. Extending the status-quo can only be seen as a BJP-Congress victory, as it means zero progress for the Kashmiri people in terms of safety, human rights and standard of living.

Unresponsive state governments are also seen as responsible in the eyes of locals for allowing Army excesses despite being Union government jurisdiction and implementation.

Today, both major local parties lie discredited, the BJP remains politically unscathed – it is unlikely to do worse – because a few years ago, for the NC and PDP, outwitting a local rival was more important than defeating a national fascist. The NC cannot sincerely claim to be the solution to BJP, when it did not oppose the BJP adequately. Mufti Muhammad Sayeed brought in AFSPA to the Valley and Farooq Abdullah formerly allied with the BJP. An alliance back then would have had credibility – and would have been a historic moment. An alliance now would reek of opportunism and delegitimised apathy in the eyes of voters – and surely lead BJP to emerge next as the single largest party.

The BJP has achieved in the state nearly everything it sought to accomplish, save for law and order.

As can be seen, keeping the BJP at bay and safeguarding Valley interests is the main, desperate talking point of the post-dismissal PDP, of its performance in government.

Governor’s Rule is unlikely to end any time soon, given government concerns regarding the security situation, according to a report in News18.

Given the scenario after the killing of journalist and editor Shujaat Bukhari (of Rising Kashmir), Governor’s Rule allows the Union Government and the mainstream media to stamp down on local regional media in Jammu and Kashmir – a longtime aim of the Indian State. Since the local government was dismissed, the only narrative out on the mainstream media has been that of the BJP.

This monopoly over information and communication (and indeed, news) also became important in light of the UN OHCHR Report on Kashmir which attacks the interventionist role of both India and Pakistan, and condemns the Armed Forces Special Powers Act (AFSPA).

The report cites the disturbingly high number of civilian deaths at the hands of security personnel in a mere two years of rule by the Modi government at the Centre and the BJP-PDP coalition at the state level – particularly damning for the parties in power:

Indian security forces used excessive force that led to unlawful killings and a very high number of injuries, the report says, citing civil society estimates that up to 145 civilians were killed by the security forces between mid-July 2016 and the end of March 2018, with up to 20 other civilians killed by armed groups in the same period.

It highlights the violationary aspects of AFSPA and the impossibility of getting justice for civilian victims:

The report demands legal repeals of draconian laws, investigations and inquiries, as well as reparations on a mass scale.

India should urgently repeal the AFSPA; establish independent, impartial and credible investigations to probe all civilian killings since July 2016 and all abuses committed by armed groups; and provide reparations and rehabilitation to all injured individuals and to the families of those killed in the context of security operations. Similarly, the PSA should be amended to ensure its compliance with international human rights law, and all those held under administrative detention should either be charged or immediately released.

Pre-poll narratives have often helped to politically and electorally empower the BJP, turning it into an actual tiger from a paper one

The Congress, of course, leapt to the defence of its own legacy (as it also recently did in the case of the Delhi statehood demand) –  sabotaging local agendas by supporting President’s Rule and discrediting the state government on security issues, arguing for a stronger clampdown in the state.

“The BJP and PDP have devastated the state government. They have had the maximum number of ceasefire violations in this period,” said Ghulam Nabi Azad.

“I think we should trust the wisdom of Governor NN Vohra to take decisions in favour of the state. We have to understand that he is a very senior man and has completed 10 years in the state. He knows how to rule the state.”

After Governor Vohra put the Assembly in suspended animation, the prospect of Assembly elections taking place within the next six months have dimmed. The National Conference has, since the beginning of the last regime, been sitting back and expecting to benefit from a swing vote next time round. However, it has not done much to defend Kashmiri interests either – a ruler in waiting.

Both local parties have ruled in J&K in alliance with national parties, and the lacklustre performances in power have only led to disenchantment.

Dismissing governments leads to lack of faith in electoral politics and state institutions among voters – consequently the likelihood of lower future turnouts becomes imminent. Historically speaking, successive by-elections have witnessed miniscule turnouts and apathy towards all parties – incumbent and insurgent both. But the “nation under attack” narrative of the BJP would ensure a high participation of its own support base – in Jammu, and in mainland India.

India should urgently repeal the AFSPA; establish independent, impartial and credible investigations to probe all civilian killings since July 2016

This would help in the next Assembly elections as the BJP seeks to expand its seats in Jammu and in Ladakh. A clean sweep would make it a local big brother beyond its current capacity. If the NC, PDP and even the Congress were to ally, post-poll, the seats in the Valley (46)would be too divided between the NC and PDP for either of them to snatch the single largest party spot over the BJP were the latter to consolidate its hold in Jammu and Ladakh (37+4 seats, respectively). Pre-poll alliances would require a division of seats in the Valley between the NC and PDP too – again disadvantageous for any party but the BJP.

Currently, the state and central governments under BJP have not yet overstepped the boundaries of authoritarianism, misrule and military excesses, historically set by the Indian state in Kashmir – but with the BJP set on becoming the single largest party in J&K through consolidation in non-Valley region, darker days are now within the realm of possibility. Amit Shah’s recent speeches and their contents show that the BJP is clearly not interested in mobilising or wooing the Valley voter.

Beyond that, saffron voter mobilisation and lower opposing turnout in J&K would aid the BJP in offsetting expected losses in MPs from other states (particularly the Hindi belt) in the 2019 Lok Sabha elections. Amit Shah and PM Modi’s aim is to maintain the brute majority of the BJP in Lok Sabha and replicate it in the Rajya Sabha – every state election counts.

One can suppose the CM post (whether NC or PDP was one-up) had been important in 2014 important too. Many progressives are seeing this as some sort of blunder that the BJP will pay heavily for – but the blame squarely lies with the two Uncle Toms who played into the hands of the saffron brigade.

Today, a PDP-NC alliance would look opportunistic, rather than worthy. The PDP itself looks toothless, and has been seen as spineless since the beginning of the alliance with the BJP. The Congress, would gain nothing, being seen as historically against Kashmiri interests. The only party that stands to gain, locally and nationally, in this polarised political stalemate, remains the ruling Bharatiya Janata Party.

This article first appeared on Films For Action. Read the original version here.