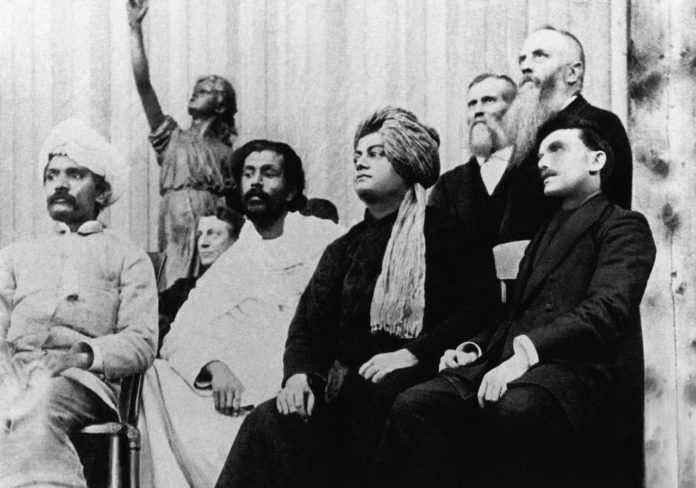 11 September 2018 marks the 125th year of Swamy Vivekananda’s epochal speech at the World Congress of Religions in Chicago, US – a bulletin hit in America and a sombre symbol of India’s ‘soft power’ even before the term was coined.

A spiritual guru for some and a religious teacher for others, he was in most parts a modern, thinking, and rational individual. Vivekananda has appealed, for decades, to people across ages, castes, genders, and even religions. Generations of young people have seen him as their forthright icon, one who dared to call a spade a spade. Today, his teachings seem much more relevant than ever before.

For him, however bitter a truth is, it must be revealed regardless of the opponent’s might. He considered fear to be the biggest enemy of any individual.

“Those who live under fear are not alive but like one’s who are dead.”

He challenged the caste system vehemently at a time when it was the common social denominator. This distinguished Vivekananda in a society that has always been discursively dominated by religious leaders and monks. People related to him almost instantaneously.

Vivekananda was a religious man, but hardly conservative or traditionalist. He preferred playing football over reading the Bhagwad Gita. “You will be nearer to heaven through football than through the study of Gita,” he said, at the certain risk of provocation. Vivekananda was not someone who would chant shlokas (sacred Hindu scriptural verses) and do tantra-mantra (shamanistic chantings and wizardry) to attract disciples. Instead, he focused on leading a healthy life.

Of many other things, Vivekananda was an all-weather critical thinker and a constant inquirer. For him, seniority and experience were no measures for not questioning established norms and values. The constituency for this trait has only shrunk over the ages, and even remains starkly absent in some of Vivekananda’s own followers today. Many of them who use Vivekananda’s name deride others for raising hard-hitting and unsettling questions.

Those who have been pushing the Hindu belief system towards a more conservative and traditionalistic tenor remain in dire contravention to what Vivekananda staunchly believed – a liberal practice of faith. Vivekananda defined religion as the realisation of God that must come from one’s within. The corollary is that none has any business shoving one’s religion down the other’s throat.

Many argue that Vivekanda has been hijacked by politically-vested entities. But, it is indeed not an easy task to sabotage his legacy. Today, his ideology is remains alive and in practice, thanks to the institutionalised efforts by the Ramakrishna Mission.

Vivekananda was almost a natural agnostic, from the very start. He ardently questioned the very idea of God, dismissing it until he would receive a visual cue. His pursuit for a convincing answer ended at Ramakrisna Paramhansa, who, when asked by Vivekananda whether he had seen God, said without blinking an eye that he had indeed seen God. Vivekananda later became Paramhansa’s foremost disciple when ultimately, he himself felt the presence of God.

But, his attainment of a theological climax did not drive him towards the quintessential solitary, monk-like existence. Instead, he devoted the rest of his life to reforming everything that he thought was wrong with the contemporary Indian society. This was directly rooted to his early diagnosis of India’s lagging developmental curve, which he thought owed much to the social ills and evils at large. ‘Work’ remained the Swami’s lifelong subject of worship.

He died young at the age of 39 in 1902 at his Belur Math residence in the then Bengal Province.

Vivekananda wasn’t a monk or a guru who demanded respect by evocative coercion. Popular reverence came naturally for him. But, if there is one big takeaway from his fearless and rational existence, it is this: being religious does not conflate with being communal.

This article was first published on 12 January 2018, the 155th birth anniversary of Swami Vivekananda.