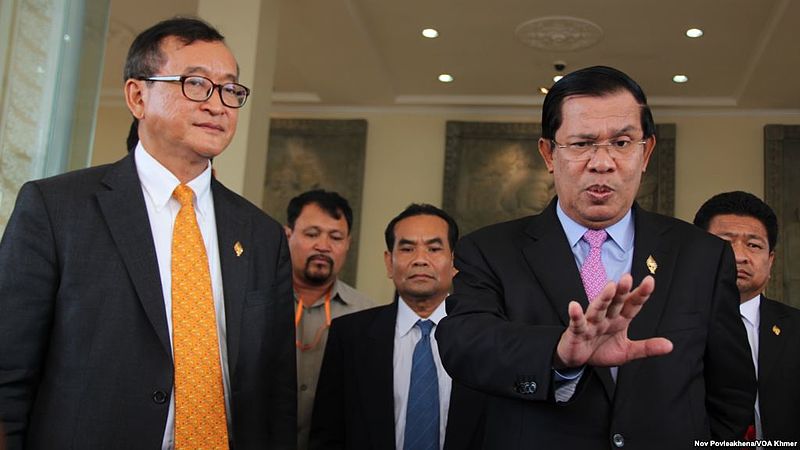 After outlawing the main opposition party that challenged the ruling CPP, Hun Sen secured more than 80 per cent of the popular vote and well over 100 of the 125 contested seats in the National Assembly. Despite calls to boycott the election, voter turnout was around 82 per cent, or about 6.88 million people.

The response from the international community has been split.

Australia, Canada, the European Union and the United States have expressed “profound disappointment” with the lack of opposition participation. Regional countries and populist European leaders, on the other hand, have endorsed the result.

The re-election of Prime Minister Hun Sen and his CPP contributes to the growing global democratic crisis. The government has taken advantage of the retreat of leading democracies to use blatant repression to suppress opponents, stifle media freedom and compromise rules-based institutions.

With the advent of digital technology and increased social media use in Cambodia, the government has also turned to “sharp power” to manipulate information, target crucial democratic institutions to exert control and change public opinion.

What went wrong this election?

Pulled out all the stops

In the last competitive elections in 2013, the opposition Cambodia National Rescue Party (CNRP) gained significant ground with 44 per cent of the popular vote, shaving the CPP’s vote share to 48 per cent. In this election, Hun Sen and the CPP were determined to pull out all the stops to prevent a replay of 2013’s humiliating results.

In 2016, a prominent political commentator and activist Kem Ley was assassinated.

The following year, the main opposition party, the CNRP, was dissolved and banned from contesting the election. The CNRP’s leader, Kem Sokha, was arrested on trumped-up charges of “treason.” This move followed weeks of tensions involving the expulsion of the National Democratic Institute from the country and the shuttering of 32 radio stations critical of the government, including the U.S.-funded Radio Free Asia and Voice of America.

A key assault on independent media included the imposition of back taxes on the leading newspaper, the Cambodia Daily, resulting in its bankruptcy. Meantime, the Phnom Penh Post was sold to a Malaysian businessman from a public relations company that worked for the Cambodian government.

Journalists were also constrained by a list of arbitrary, controversial rules regarding how they cover elections. They were prohibited from having their “own ideas to make conclusions,” asking detailed questions about the election result or from “interfering” at the voting booths by talking to voters. Cambodian journalists also routinely deal with phone-tapping and death threats, and are forced to self-censor.

What’s more, high-ranking members of the armed and police forces campaigned for the CPP prior to the election, while others threatened to take away public services to residents in certain provinces unless they voted. The government also threatened people who wanted to boycott elections. Additionally, vote-buying was reported in which envelopes filled with 20,000 riel (approximately US$5) were handed out to voters at campaign rallies.

Aside from stifling the mainstream media, the government also cracked down on digital media to prevent the opposition from making any headway. To prevent digital technology from becoming a liberalizing or mobilizing tool, the government ramped up its surveillance of online activities.

In 2015, the controversial Law on Telecommunications was passed to authorize the government’s eavesdropping on all telecommunications. Every phone conversation, text message, email or post on Facebook, if deemed to have violated “national security” clauses, could result in a 15-year prison sentence.

Weary of the spread of online “fake news” — also known as negative media coverage — staff from three government ministries were tasked to control news content, writing, audio, pictures, videos and any other media with “the intention to cause instability” prior to the July 29 election.

Internet service providers were also required to have software and equipment to filter or block websites, accounts or social media pages that “broadcast in violation of the law.”

The government is now drafting “fake news” legislation similar to Malaysia’s “Anti-Fake News Act” to punish those found guilty of creating or distributing supposedly false information with up to two years imprisonment and fines of up to US$1,000.

Many of Cambodia’s government-approved media outlets, with their links to China, are looking more like China’s authoritarian model, which should be cause for concern for proponents of democracy.

While internet penetration has increased in Cambodia, internet freedom has declined. Cambodia was ranked as having the worst environment for clean elections and for freedom of political parties from 2000 to 2015 in Southeast Asia. Once a thriving and open media hub, Cambodia now sits at 142 in the World Press Freedom Index.

The international community’s response to Cambodia’s sham election is divided. The U.S. and the EU, who provided aid to Cambodia after its first UN-administered election in 1993, cut electoral assistance and suspended funding prior to the vote. On the other hand, Russia, South Korea, Japan and China have remained loyal donors.

While Russia provided election monitors, China and Japan supplied election ballot boxes and booths. China also promised US$100 million in military aid to boost ties with Cambodia prior to the election.

Despite calls from local election watchdogs not to send observers, Cambodia’s National Election Committee (NEC) reported there were more than 50,000 observers, including some from China, Myanmar and Singapore, who participated in election monitoring. And a group of European populist and nationalist politicians from the UK Independence Party (UKIP), the Bulgarian Socialist Party, the Czech Freedom and Direct Democracy Party, the Austrian Freedom Party and other right-wing party leaders also descended on Cambodia to observe and endorse the national election.

The CPP’s victory does not bode well for Cambodian democracy. Given the failure of international sanctions to have any effect, it is likely Cambodia will slide further into electoral authoritarianism in the coming years.