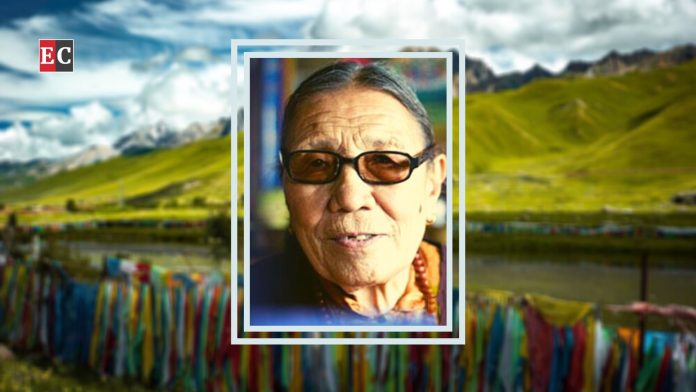 On 3 August, Ama Adhe, the iconic Tibetan freedom fighter, former political prisoner, and human rights activist passed away in Dharamsala. She was 92.

Ama Adhe – or Adhe Tapontsang – was born in 1928 to a Tibetan nomadic family in Kham Nyarong in east Tibet.

‘Ama’ means mother in Tibetan. Over the years, armed with her extraordinary story of grit and survival, she inspired and nurtured many young Tibetans and non-Tibetans to join the Tibetan freedom movement. Her loving personality and motherly warmth won many young hearts – who now see themselves as her adopted children.

As someone from a nomadic Tibetan family myself, Ama’s recollections about the pristine beauty of her childhood village, the snow mountains, and the valleys teeming with trees and flowers always made me homesick.

But as fate would have it, she could not live a normal life in her beautiful village, unlike her forefathers. Some dark forces were to upend not just her life, but also the life of her nation.

After their victory in the Chinese Civil War in 1949, the communist regime under Mao Zedong began to occupy Tibet in the east and north. Ama Adhe was to experience and witness the horrible transformation of her country under a ruthless colonial regime. As Chinese expansion was met with fierce Tibetan resistance in the east, violence and bloodshed ensued.

Initially, Ama Adhe and her husband planned to escape to Lhasa and then to India. However, her husband was poisoned by Chinese agents and died, leaving her with a little boy and another baby in her womb. This changed the course of her life.

Along with 300 women from her village and other villages in the surrounding area, Ama Adhe joined the Tibetan resistance movement. As the male members from her region went on the mountains to hold strategic positions to fight against the invading enemy, the women shouldered the responsibility of providing supplies like foods and other provisions.

After the Chinese army outnumbered and crushed the ill-equipped Tibetan resistance, Ama Adhe and her group were arrested. What followed next were 27 years of unimaginable torture, exploitation and humiliation at the hands of Chinese authorities.

After they were rounded up, a Chinese soldier killed her brother in-law in front of her with a point blank shot on his head. His blood and brain splattered out, and some of it fell on her. The solider then turned to her and asked sardonically:

Also read ‘Dragon on the Roof: Behind Xi Jinping’s Quest for Loyalty in Tibet’

The Chinese imprisoned Ama Adhe and others in a jail inside China for three years. Among the 300 women, only four survived. As they were denied food and forced to work, rest of them either starved or tired to death within three years.

When they died, some of them moved their lips said, “Please give me some food. Please give me water”, while others cried for their family. Ama Adhe survived this death by starvation as a primary witness to the inhuman ordeal of her people.

Then the Chinese transferred her to a Laogai (labour camp) in Tibet where she spent 24 years until her release in 1985, when Deng Xiaoping pardoned some political prisoners at the same time China began to open its market to the outside world.

When she returned to her village, the mountains stood barren, with the forests gone due to excessive deforestation. The monasteries were gone too. Even worse, her son had died in her absence. Luckily, her daughter who was barely few months at the time of her arrest had survived and grown up into a young woman.

But they could not recognise each other as she never had a chance to see or even know about her during the entire period of her incarceration.

With her freedom from Chinese labour camp, Ama Adhe could have settled in her village with her daughter. However, her moral urge and determination to tell the truth about what had happened to her country and people during the critical years of Chinese occupation compelled her to flee from Chinese control.

Ama Adhe escaped into exile in India in 1987 and settled in Dharamsala. Since then, she made every effort to tell the harsh reality of Tibetan lives under Chinese colonial rule through her own experiences, and also as a witness to the inhuman treatment of Tibetan political prisoners.

Through her book Ama Adhe: The Voice that Remembers – The Heroic Story of a Woman’s Fight to Free Tibet, published in 1997, and numerous talks and interviews, she countered Chinese propaganda on Tibet that was couched in the typical colonial vocabulary of ‘liberation, emancipation and development’.

Moreover, her heroic story of survival with dignity and courage inspired thousands. It revealed the immense ability of the human spirit to endure the unthinkable and still find the grace to smile. Her life and story symbolise the indomitable spirit of the Tibetan nation and its people, and the courage to dream for a better future despite all odds.

Though the flow of her life was terribly disturbed by the toxic combination of communist revolution and colonial politics of violence, oppression and suspicion, she had never lost her sense of humanity. And that was a great victory.

Ama Adhe is now survived by the fight for a free Tibet.