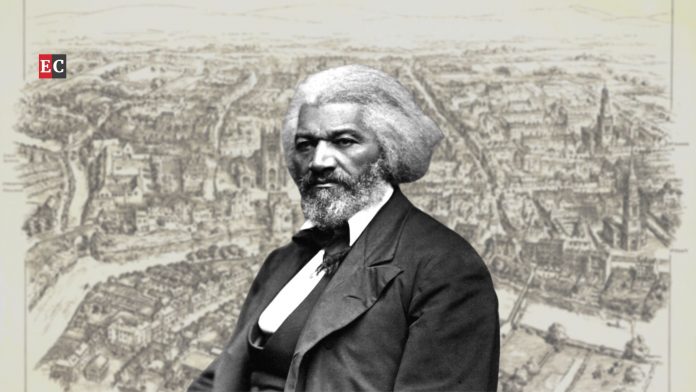 It is only down to the doggedness of the campaign to commemorate the Peterloo Massacre of 1819 that this shorthand for violent state suppression has become so widely recognised. I’ve lived most of my life in Manchester and yet was in my late teens before I ever heard the term. And I can say from experience that I’m far from being the only one.

We have the recent Emeline Pankhurst Statue in St Peter’s Square, across the tramlines from the new Peterloo memorial. We do have some much older memorials to radicals, of course. In St Ann’s Square, Richard Cobden stands triumphant in bronze. A few hundred yards from Cobden, we have the solemn figure of Abraham Lincoln – Lincoln, the emancipator.

This statue of the former US President was donated by Ohio philanthropists in 1919, ostensibly to commemorate the self-sacrifice of the Lancashire cotton workers during the American Civil War who, in a letter, urged Lincoln to continue his blockade of Southern ports, starving both the economy of the American South and the workers of the English North West. Lincoln replied with a public letter of his own.

There is a contemporary who links these two men, and whose absence, and their presence, is the passive erasure of black people from the history of the United Kingdom in a nutshell. If the bronze Cobden was to step down from his plinth, he would look to his left and make his way to Holland and Barrett, 22 St Ann’s Square.

This is the address, which his friend – the orator, civil rights activist, abolitionist, diplomat, proponent of universal suffrage, ship’s caulker and autodidact – called home from 1846-7. His name was Frederick Douglass, and he had escaped from slavery in Baltimore, Maryland, a little over ten years before his residence in Manchester.

Frederick Douglass was born into slavery in, by his own reckoning, 1818 (the birth of human chattel not being considered worth recording precisely), in Tuckahoe, Maryland. He made his escape on the third of September 1838; this date he chose as his birthday.

It is an impossible task to convey here the extraordinary nature of this person. We are fortunate that he took the time, whilst an enslaved child, to steal an education in the fundamentals of literacy from some of the neighbouring free (read: white) children, tricking them into teaching him letters of the alphabet he didn’t know.

He used this to study his first, illicit, book – The Columbian Orator. He wrote his first autobiography, Narrative of the Life of Frederick Douglass, an American Slave, in early 1845, shortly before coming to Britain as an agent of the American Antislavery Society. Several updated editions were produced in Douglass’ long life, the last in his 70s.

When Douglass came to the North West of England, he was already known in abolitionist circles, of which Cobden was member – the tall young fugitive who had determined one day to fight back against a ‘negro breaker’ by the name of Covey and never submitted to be whipped again without fighting back. An extraordinarily brave position to take.

But he was known best for his mind and his tongue, the things he himself prized above all else. In England, Cobden, along with John Bright, were his first contacts. He wrote of staying with Bright at his home in Rochdale, and seems to have stayed with Cobden although it’s not clear exactly where.

Considering his eventual residence in St Ann’s Square, it is probable that Douglass will have spent time with Cobden at his town house on the corner or Byrom Street and Quay Street. This house still stands and is commemorated with a plaque.

Douglass attended Parliament with Cobden. Cobden was one of the founders of the Manchester Athenaeum (now part of the Manchester Art Gallery) at which Douglass gave at least one lecture. He was also in attendance at the final meeting of the Anti-Corn Law League in company with Cobden and Bright on 2 July 1846.

Douglass remained in Britain for nineteen months on this first visit. The only addresses we have for him in this period are in Edinburgh, Glasgow, Manchester and London. Only London is commemorated in any way.

During his stay in Britain, Douglass was still a slave under American law. He had received word from Boston that agents of Thomas Auld, the man who claimed him as property, had been seen in the state. Some of his friends in Scotland paid the money to purchase and emancipate him – a contentious issue that we can read about in this letter, written, as the return address shows, at ‘22, St Ann’s Square, Manchester (England), 22nd December, 1846’.

The letter from Manchester

When Lincoln eventually decided to make the Civil War a war to end slavery (this was not his intention at the start), he called on Douglass specifically for advice and assistance, in particular on the enrollment of black Americans in the US military. Douglass was wholly in favour of this provided they were admitted on equal terms in all respects.

The assurance was given and Douglass issued a call to arms for the first two ‘colored regiments’ (in which his two sons enlisted). The men who signed up, many of them fugitives, were put on commissary and ditch-digging duties, unarmed, in different uniform, on lower pay.

Lincoln then requested his help in filling up further regiments and Douglass refused. He refused in writing, and he also travelled to Washington to state his grievances in person to the President of the Union.

Also read ‘The Poetics of Abolition: From Female Suffrage in the US to Social Reformation in India‘

It was shortly after that meeting in the White House that the men, women and children who worked in the cotton mills of North West England took the collective decision to refuse to weave any Confederate cotton that managed to run the blockade.

They did so knowing this meant greatly reduced work, pay and probable destitution and starvation. Still, they sent a letter to Lincoln from ‘The Working Men and Women of Manchester’ urging him to continue the blockade and crush the slave power. It’s worth noting that the reply, although sincere and grateful, was addressed ‘To the Working Men of Manchester.’

Just prior to Douglass’ death in 1895, Ida B. Wells, an often publicly overlooked civil rights worker and recorder of lynching in America from the post-reconstruction era onward, was on a speaking tour of Britain. This woman, possessed of truly incredible levels of bravery and resilience, was absolutely dedicated to fighting for the civil rights of African Americans and especially for the voting rights of African American women after Susan B Anthony abandoned their cause.

Wells toured the same places in the North West – Manchester, Rochdale, Bury, Salford, Stockport, Ashton, Moss Side, as had Douglass, Henry Brown, George Washington Williams, William and Elizabeth Craft, and many others before her.

Beyond the Lincoln statue

This isn’t intended as a proposal for who should and shouldn’t be remembered publicly. But now that this absurdly overdue conversation is finally happening, we could start, in Manchester, by placing a statue of Frederick Douglass next to Lincoln, and renaming it Douglass Square.

This space could including memorials to Ida B Wells, Henry Brown and others who fled slavery or oppression and sought out Manchester, not uniquely, but specifically. It could also be a space to recognise Robert Rose, a 19th century Manchester poet from the West Indies, as well as Sylvia Pankhurst, Ellen Wilkinson, Lemn Sissay, amongst many others with whom Manchester ought to take public pride in, that future generations will take pride in, if given the chance to do so.

This would not be a repudiation of Anglo-American relations, but a recognition of these relations being between all of us, and not restricted to heads of state.

Also read ‘#BlackLivesMatter: What the French Revolution Tells Us About Destruction of Statues’

We should also bear in mind the date of that Lincoln statue – 1919. This statue embodied the version of America which America wanted to project: slavery and racial divisions were over, and Honest Abe ended it. This was in the same period in which the majority of confederate monuments in America were erected, and in which American imperialism began to expand.

The Lincoln statue should remain, but not as a commemoration of Manchester’s support of Lincoln’s cause. That statue is there because the working men and women of Manchester chose to risk their own survival rather than aid an economy dedicated specifically to maintaining the enslavement of men, women, and children like Frederick Douglass, Ida B Wells, Henry Brown, George Washington Williams, William and Elizabeth Craft, Booker T Washington, W E B DeBois, and, at the time of Douglass’s residence in Manchester, 4,000,000 other human beings held in chains.

The statue should remain as Lincoln is a crucial part of how slavery was ended in law, if not in fact. But he did not free the slaves, they freed themselves, and some of them sought out Manchester.

The physical manifestations of a city’s soul matter. The recent commemorative additions to Manchester’s social history – the Turing memorial, the statue of Emeline Pankhurst and the Peterloo memorial – stand out in their isolation against the more rapid expansion of glass-clad cathedrals to capitalism, although the latter at least offer more shade to the city’s expansive homeless population.

Frederick Douglass became one of the most famous and celebrated men of the 19th century, and the most photographed person of the century. There are more lithographs, daguerreotypes and photographs of Douglass than there are of Queen Victoria. This is a lesson in the history we’ve chosen not to remember as a city, and as a society.

To begin the process of relearning this history, let us start with commemorating Frederick Douglass.

is a historian based in Manchester, United Kingdom.