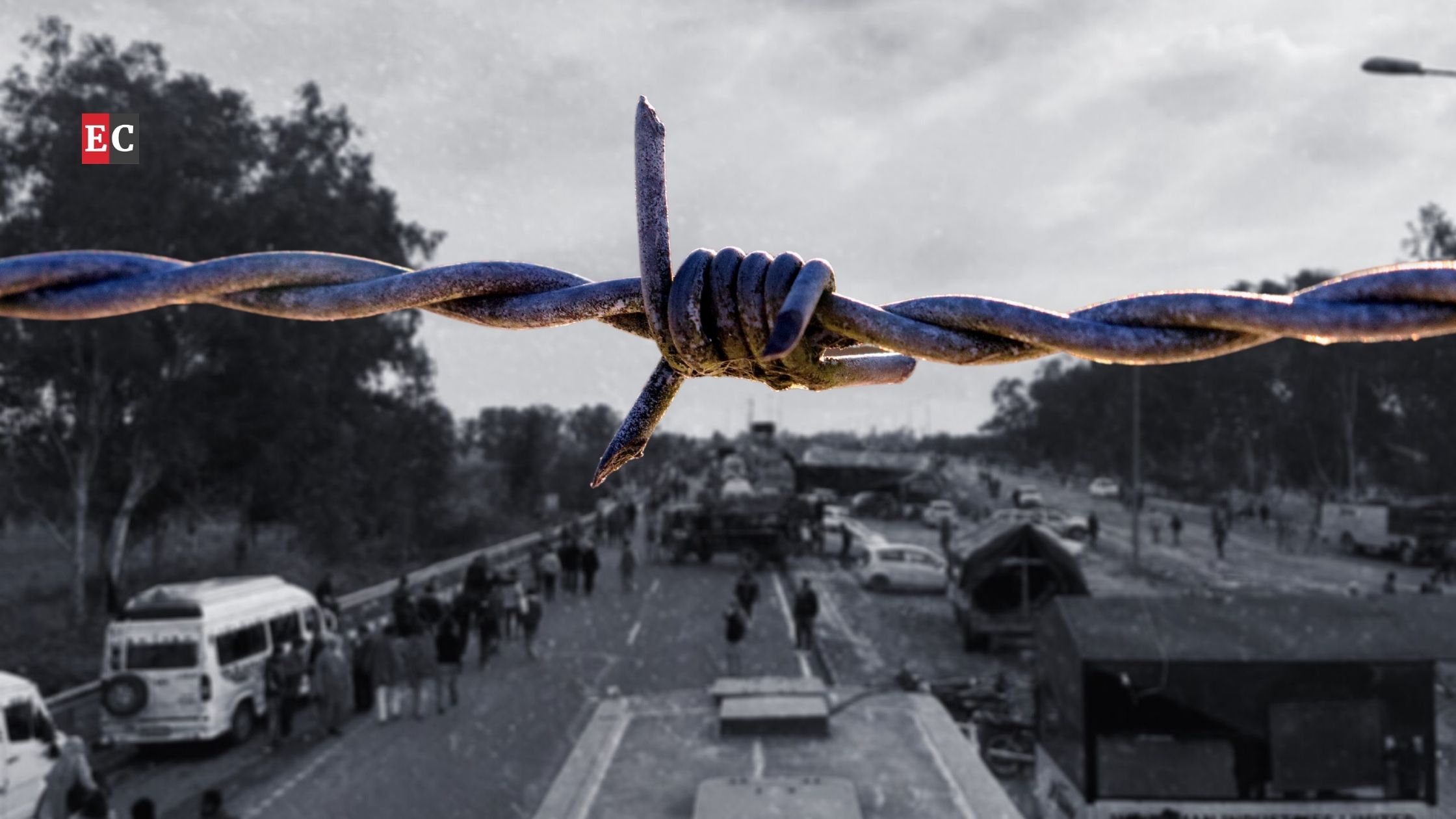 Earlier this year, as the unsparing Indian summers singed the North Indian plains, Indian troops faced their Chinese counterparts along the highly volatile Line of Actual Control (LAC) high up in the cold deserts of Ladakh. The nation, at least its loudest newsrooms, too singed in the heat of the escalation, as a tepid standoff soon transformed into violent hand-to-hand melees, leading to the death of 20 Indian soldiers. For a while, the infamous India-China border was all that Indian channels could go on about, as a pandemic continued to kill hundreds a day.

Then came the equally unsparing North Indian winter, and with it, another border war.

Except this time, there were no foreign troops inching towards sovereign territory – only a sea of the country’s own farmers who wanted to march to the national capital and register their protest against a set of new agrarian laws that could change their lives forever. Most of them had a singular demand: repeal the three farm bills passed without wider consultation by the Indian parliament in September.

One would have perhaps expected the Bharatiya Janata Party (BJP)-led governments at the centre and Haryana (a state that farmers from Punjab need to cross to get to Delhi) to at least allow the farmers to reach New Delhi and listen to what they have to say, if not repeal the laws. But the belligerence with which the marching contingent was treated would perhaps even turn heads at the LAC. For a moment, protesting farmers were made to look like invading enemies who are to be kept away from His Majesty’s court in the nation’s capital at any cost.

From armoured trucks spraying cold water on the protestors to bulldozers digging up trenches on a national highway, the Manohar Lal Khattar government in Haryana gave it all to stop the farmers from Punjab from entering the state and reaching New Delhi. This is while Khattar sparred with his Punjab counterpart, Captain Amarinder Singh, on Twitter, accusing him of not responding to his calls and playing “cheap politics.”

Despite the brute force with which the administration sough to hold them back, the protesting farmers managed to breach literally everything on their way. They not only faced water cannons and tear gas from the front, but also shoved aside, in a starkly herculean fashion, a whole range of usual and unusual deadweights and hurdles that the Haryana police had put up along different points of the Punjab-Haryana-Delhi highway – freight containers, metal barricades, barbed wires and concrete roadblocks.

A large mob of protestors were also seen flinging barricades put up by Ambala Police over a bridge into the river below.

To bypass the barricades, some on modified tractors, buses and trucks even veered off road into farmlands flanking the highway and made their way ahead. Activist Anand Mangnale did a Twitter thread documentation of how the protesting farmers first deliberately provoked the police to spray water and then used the slurry of wet mud to slide the freight containers and concrete barricades away.

As the agitating juggernaut then hurtled towards the national capital, another confrontation was waiting for them. Soon enough, violent clashes erupted as the protestors hit the Delhi-Haryana border in Singhu and Delhi Police tried to stop them using tear gas and lathicharge.

The capital’s police, which comes under the union government, even sought permission from the Delhi government to use nine stadiums to temporarily detain protestors, a request that the Arvind Kejriwal-led administration later turned down.

Eventually, however, the Delhi Police changed tact and allowed the farmers to enter Delhi, but only on the condition that they head to a large park in Burari, a suburban locality in Northwest Delhi, not far from the Delhi-Haryana border. The state often does this to de-mobilise large disruptive protests and confine them to areas that it can actively control.

While some farmer groups relented and headed towards the designated protest site, several others weren’t buying it. They have refused to go to Burari, staying put at the Singhu and Tikri borders since. Both sit-ins have now become the focus of the agitation.

Also read ‘Not Just Agriculture, the Farmers’ Protests in India Are Also About a Weakening Federal Structure‘

On Sunday, turning down the Home Minister Amit Shah’s conditional offer for talks, 30 farmer groups made it clear that they won’t go to the “open jail” in Burari and would block all the five entry points to Delhi. They want a high-level Cabinet panel, not a bunch of ministerial secretaries, to speak to them.

Surjeet S Phul, President of BKU Krantikari (Punjab), even said that the protestors have stocked up four months worth of ration. Clearly, they are in this for the long haul now.

The manner in which the whole thing unfolded had a very warlike tenor to it, not just in the state’s use of force against the unarmed farmers, but also the way the ‘Delhi Chalo’ contingent created a full-fledged travelling convoy from Punjab to Delhi, complete with supply lines for ration and fuel.

In their signature style, Sikh groups, such as Khalsa Aid India, pitched tents to set up ‘langars’ (community kitchens) along border crossings and along the highway to ensure that protestors don’t have to go hungry in the biting cold.

Even existing establishments, like the famous Amrik Sukhdev Dhaba in Murthal, opened their doors to the farmers. Some of the langars also offered food to the cops. In a notable mark of solidarity, Muslim groups set up langars at various places to feed the protestors.

An ‘all-hands-on-deck’ ecosystem emerged where various members of the farmers’ community pitched in to make sure the cross-border agitation can be sustained. We have seen many protests in the past few years since the Narendra Modi government came to power, but few agitations have throw up such striking examples of community participation and collective resource mobilisation.

There is little doubt that without such large-scale, systematic and targeted organisation, the contingent would have struggled to reach the national capital or maintain tactical pressure on the state. The fact that the farmers had the wherewithal to face the state’s attrition for days allowed them to push through state lines. Their steely resolve only added more warmth to the flame.

Make no mistake, whatever the conclusion of this agitation is, the vehemence and fury with which the farmers resisted the Hindutva regime’s violent crackdown is remarkable.

Surely, the Khattar government in Haryana, backed by the centre, must have thought that the marching contingent would retreat when sprayed with cold water and blocked off with all kinds of barricading. But, both the central and Haryana administrations were always held back by a natural constraint that the protestors cleverly exploited to push through – the inability to go all out against the farmers (read: use lethal force).

So when the state exhausted all viable options of stopping the protestors, it relented and offered talks. The farmers also have a captive national audience now. Overall, it has been a tactical victory for the agitators so far.

This is a fitting redux of last year’s winter of discontent at Delhi’s Shaheen Bagh where a sit-in protest against the Citinzenship Amendment Act (CAA), led by Muslim women, forced the government to offer talks. Punjabi writer, Amandeep Sandhu recently wrote in a piece about the ongoing agitation:

“I believe this #DilliChalo march has shattered the miasma of Hindutva‘s power and arrogance. This miasma was first punctured by the Nanis and Dadis of Shaheen Bagh and its hundreds of models across Indian cities and towns last winter anti-CAA/NPR/NCR.”

Despite the initial victory, this is hardly the end of the road for the farmers. Right-wing media, and even ‘liberal’ commentators such as Barkha Dutt, have begun to associate the protests with the Khalistan movement. Dutt, for instance, in an interview, was seen heckling Punjabi actor and protestor, Deep Sidhu, over the Khalistan issue.

In a completely un-journalistic show of presumptuous reporting, Dutt concluded that Sidhu had “hurt the farmers’ cause” by refusing to call JS Bhindranwale, former leader of the Khalistan movement, a ‘terrorist.’

The protest leaders, if there are any, have to reckon with this other war, besides the one being fought on national highways and border crossings. The police lines will eventually retreat and the barricades removed. But the discursive criminalisation of Sikh agitators as terrorists and holding them hostage to their own bloody history will linger on in the popular psyche. There is no dearth of public media voices who would water this narrative day in and day out.

Protestors also need to think about how far they are willing to push the line before a logical conclusion is reached. This is not a regime that will easily repeal a law it introduced, as the anti-CAA protests showed. Yet, this moment should not be under-read or dismissed. The farmers, purely through their pinpoint organisation and relentless posturing, have made it very difficult for the Modi-Shah regime to ignore or dismiss them.

They have reminded us, once again, that the Hindutva political project, with all its ideological grandstanding and hubris, isn’t bullet-proof. But whether this moment of resistance irreversibly discredits the Modi government in the eyes of the larger national electorate is yet another matter, and remains to be seen.