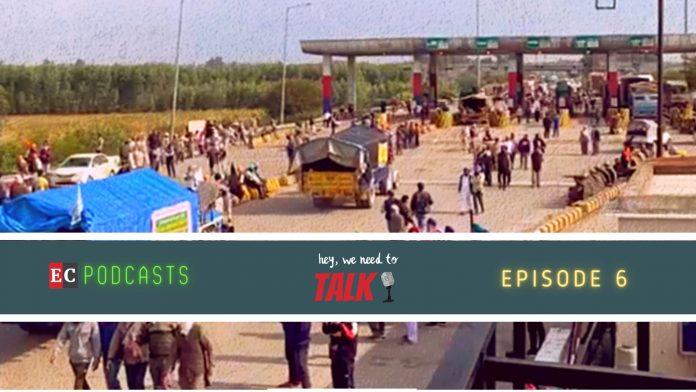 Over the last few days, lakhs of farmers, mostly from Punjab but also from other states of North India, have descended upon the doorsteps of New Delhi to protest against a newly-enacted set of agrarian laws.

Amongst other things, the three controversial laws threaten to dilute the Minimum Support Price (MSP) regime, get ride o the state government-regulated APMC/Mandi system, and encourage greater corporatisation of the agrarian market. To know more about these, tune in to Episode 4 of this podcast series.

As the marching contingent of farmers attempted to reach Delhi via Haryana, the Manohar Lal Khattar government in the state deployed all means at its disposal to stop them from reaching the national capital – from spraying cold water through water cannons to digging up trenches on the highway.

But, the farmers managed to breach everything and reach the Delhi-Haryana border on 27 November. They are currently camping at the Singhu and Tikri borders, after turning down the Bharatiya Janata Party (BJP)-led union government’s offer of moving them to a ground in Burari. So far, farmer representatives have spoken to the government on two occasions.

In this episode, Punjabi writer and freelance journalist, Amandeep Sandhu, unravels the agitation, which has already turned out to be one of the biggest and most finely organised movements of its kind in recent years. He talks about the broader structural grievances driving them, the gaze with which the urban middle class is looking at them and what they mean in times of Hindutva politics.

Listen to all our podcasts here.