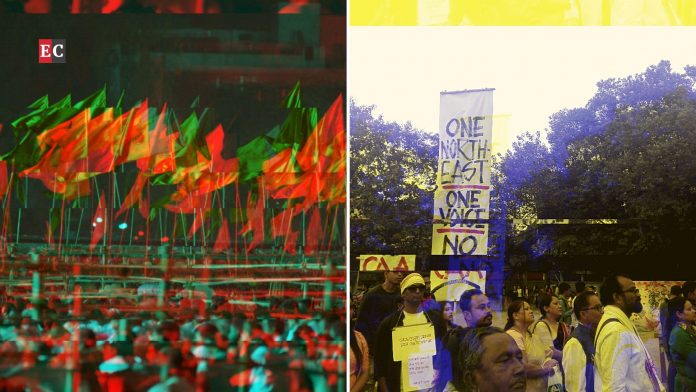 From the ashes of the anti-Citizenship Amendment Act (CAA) and pro-National Register of Citizens (NRC) protests that gripped the Northeast Indian state of Assam at the end of 2019 and early 2020, numerous political coalitions have emerged in light of upcoming state election.

A bunch of new Jatiyotabaadi (ethnonationalist) or subnationalist or regionalist political parties, such Raijor Dal and Assam Jatiya Parishad (AJP), have been formed. But, all of them have similar discriminatory and anti-humanitarian roots, undemocratic distribution of leadership and vague or absurd understanding of how a society works (or should work).

Subnationalism is just small or ‘little’ nationalism – one that attaches itself to a limited geographical area in the context of a larger national territory, such as India. It is often dedicated to one cultural, linguistic, religious or racial identity. Besides Assamese subnationalism, Marathi subnationalism led by the Shiv Sena is another case-in-point. Despite functioning is a smaller area, more often than not, such smaller nationalism shows similar tendencies as their larger counterparts.

George Orwell in Notes on Nationalism aptly described nationalism and its nature:

“Nationalism is power hunger tempered by self-deception. Every nationalist is capable of the most flagrant dishonesty, but he is also – since he is conscious of serving something bigger than himself – unshakeably certain of being in the right.”

The same can be said for subnationalists. ‘Patriotism’ is different from subnationalism. One is devotion to the lifestyle and culture of a kind or land, while the other, like Orwell says, is a lust for more power and prestige.

The commonalities between nationalism and subnationalism are a cause for concern. We have seen how nationalism has destroyed certain European countries in the past and is doing so in the present. Though nationalists and subnationalists may oppose each other in basic functioning and agendas, there is a common line that they share, which divides people into pockets or asks them to sacrifice their consciousness.

In this regard, following are 13 points that show the similarity between the pan-Indian Hindutva nationalism of the ruling Bharatiya Janata Party (BJP) and various forms subnationalism, particularly Assamese subnationalism: