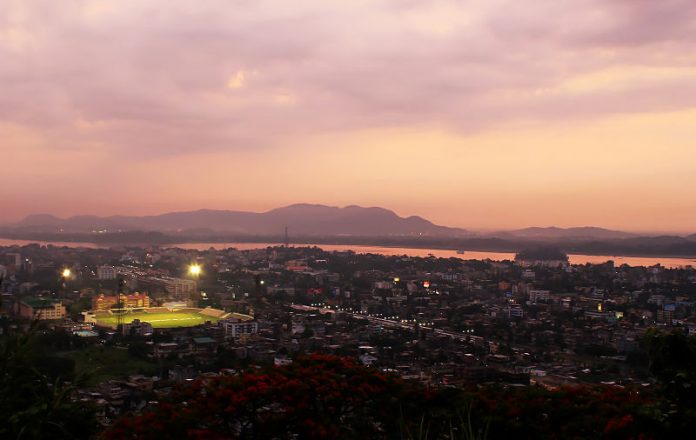 Assam, in India’s northeast, is one of the most naturally endowed regions in the country. The state receives abundant rainfall, so much that flood relief schemes need to designed and upgraded each year, shelter camps need to be built, and so on. Yet, ironically, the state’s largest city, Guwahati, is facing an unprecedented water crisis, despite lying on the southern bank of the mighty Brahmaputra river.

The city receives an average rainfall of 1,722 mm per year, which is equivalent to 5,64,816 million litres of water – enough to meet the daily requirements of 37,65,440 people. I live in one of the most crowded residential regions in this city and has been forced to buy water through private channels, despite having a well and municipal water connection since two years. This is not for a large family, but just four people.

The reason why I choose to write about this issue now is because I have seen a water tanker come to every house in my locality every fortnight. Not just that, the salon located in this posh locality of Guwahati also buys water. These water tankers charge around Rs 500 for a thousand litres. Even digging a borewell costs hundreds of thousands of rupees, which not every Guwahati resident can afford.

In the rainy season, if Guwahati experiences a heavy downpour for just an hour, the majority of the city gets water-logged. Some of the most densely-packed neighbourhoods, such as Fancy Bazar and Uzaan Bazar, situated on or close to the riverside are labeled as “Red Alert” regions. Then why the crisis of groundwater or potable water?

The surprising part is that there is no mention of the city’s acute water crisis in any of the major newspapers or news channels of Assam. However, in May 2020, an article published in The Sentinel talked about the dearth of drinking water in certain prime localities of Guwahati due to the technical snags in the municipal pumps that are used for the suction of water from Brahmaputra.

But, most of the media houses continue to be obsessed with other issues – unending series of different protests, road accidents, crimes, COVID-19, and others. Hence, there is no coverage on one of the most substantial problems, despite the fact that there is a high chance that the water situation will further deteriorate owing to the changing infrastructure of the city. In the last few years, Guwahati has witnessed the rapid mushrooming of large housing complexes, shopping malls, hotels, restaurants and the likes, all in the name of vikaas (development) and turning the city into a “smart city”.

But, if the city’s posh localities and affluent citizens are purchasing water, one wonders what the situation would be in neighbourhoods with people living hand-to-mouth. Most of the water pumps are dilapidated and the machinery used by the Water Board is worn-out. Further, certain areas of Guwahati – like Maligaon and Noonmati – cannot use the ground water because of its high iron content. Even filtration and further storage of this water doesn’t come cheap.

Also read ‘‘Day One’: Of Swelling Development and Shrinking Spaces in a Not-So-Big City‘

Dulal Bora, an RTI activist, had noted in 2019 that “despite being situated on the banks of Brahmaputra; the people of Guwahati have not been able to use its water.” According to him, further, “because of the lack of goodwill in the government, this issue of water crisis is being kept alive, just like issues regarding terrorism, because if it is solved, the government will have no agenda while asking for votes.”

An ambitious Greater Guwahati Water Supply Project was sanctioned way back in 2009 and an amount Rs 389.53 crores was estimated to be utilised in this. After years of initiation, in which roads across the city were excavated to lay water pipelines, officials now say that the completion date of the project has been pushed to 2022. With the COVID-19 pandemic and its associated hindrances, this date expected to delay further.

However, representatives of the departments concerned refuse to go on record to mention the exact date when people of Guwahati will actually get running water at their homes. So is there any solution to this?

Yes, but first, we need to stop relying on the government to solve this. Assam is a part of India, and in this country, a minimum of five years is required to see light at the end of any tunnel if the government is involved. Second, the residents of Guwahati, especially the youth, should become conscious and diligent, minimise water usage, and completely stop the wastage of water. This could include simple, everyday measures such as the use of mug and bucket for bathing, instead of showers.

Also, the city needs to initiate widespread initiatives for harvesting rain water so that the copious rains become a boon. This would entail collecting the rain water, purify if required, and utilise it for different household needs. Youngsters, NGOs, and social activists in and around Guwahati must mobilise public opinion around this through different channels like social media, street plays, theatres and the likes.

Lastly, lack of water may not be a problem for me at this juncture, but I do wish to make the citizens of Assam in general, and Guwahati in particular, aware of the fact that in the long run, every household of this place may become a victim of water crisis. The problem in Guwahati is very real. So, before it is too late, we must switch to sustainable living and save water, individually as well as collectively.